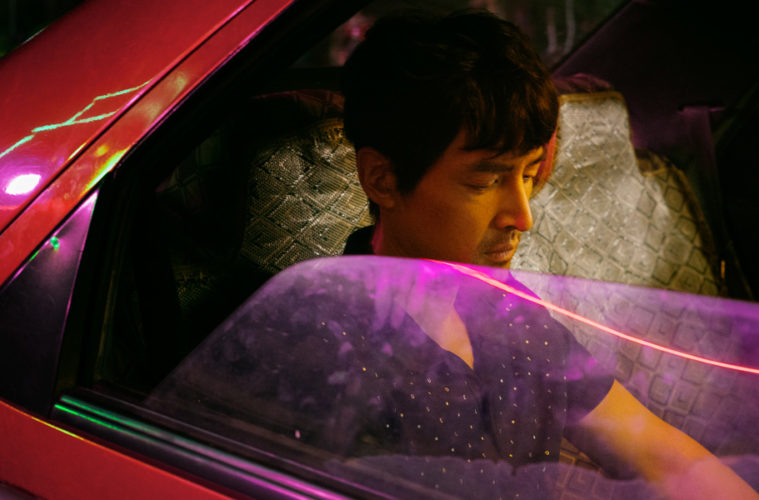 “Ever thought of running away?” “Where to?”

This exchange comes late in The Wild Goose Lake, the latest film from stylish Chinese genre filmmaker Diao Yinan (previously awarded with Berlinale’s 2014 Golden Bear for his art film-inflected neo-noir Black Coal, Thin Ice), and within the film’s noir milieu the line fits. It’s shared between a gangster on the run and the call girl companion he’s been forcefully entwined with, however a strange combination of filmic tools means it comes tinged with a unique, near-cosmic portent, revealing even more so than his last film a much richer, wounded existentialism about two lonely, desperate people simply surviving in a dilapidated, contemporary Mainland China.

That gangster is Zhou Zenong (Hu Ge), introduced to us with bloody knuckles, standing under a concrete bridge surrounded by mud and rain. He’s an experienced fighter and motorbike thief who finds himself at odds with younger members of his organized underworld when disagreements over process, seniority, and territory result in some hastily made decisions; a gun is fired, and a rhythmic sense of controlled chaos ensues that is filmed with split-second detail as lights and fists collide with grimy concrete and sweaty skin, scraping strings providing an eerie metronome as the single bulb of light lurches back and forth until the point that it is shattered and we are enveloped in darkness.

A mundane warehouse brawl between petty thieves has thus been transformed into some sort of subterranean nightmare, an unhinged and primal dog-eat-dog mentality that seeps its way into the Diao Yinan’s otherwise fairly clinical style. The consequences of that brawl set the film on an existential downward spiral, as Zenong and his crew (who were responsible for bringing the guns to the meeting and escalating an already bad situation) find themselves targeted in an impulsive retaliation involving a brutal decapitation and attempted execution during a late-night motorbike rendezvous that is abstracted by the blinding headlights and inky black voids on either side of the road—straight out of Lost Highway.

In that abstract confusion of unseen threats and bizarre violence Zenong shoots and kills a cop, and the rest of the film is dictated by the subsequent manhunt that that fateful action inspires. The cops are angry and cruel (no idea how this got an image of officers repulsively taking photos with corpses past Chinese censors) and the reward is 300,000 Yuan, meaning that more interested parties won’t be far behind. Of those parties, Liu Aiai (Kawi Lun-Mei), a “bathing beauty” sex worker who works out of the misty nighttime waters of the titular Wild Goose Lake is one of the more enigmatic. Her attempts to help Zenong strategically turn himself in so that his wife can receive the reward money soon colliding with her own pursuit of an off-ramp out of this lifestyle.

In fairness to her, Diao Yinan (and cinematographer Dong Jinsong) have done everything in their power to mesmerize and sicken you with this underworld of wandering souls and the socioeconomic interests that want their bodies; artificial neon lights project garish colors onto decrepit structures while this fatalistic dreamscape unfolds. The film posits that everyone in Mainland China is sinking into it. Fast.

Consider the early image of cops mundanely organizing themselves in a similar manner to the way the criminals do in an opening brawl; especially the detail about assigning territory: “Is this guy a cop or one of ours?,” one of Zenong’s colleagues remarks later in the film. They are then seen raiding lower-class and abandoned buildings set for demolition and redevelopment before those same raid images are redeployed later in farcical neon. A cartoonish number of cops undercover are wearing glowing dance shoes, providing a bizarre visual gag to the barbarous collateral damage they dish out.

Another beautiful but upsetting sequence involves a gunfight cut with an almost avant-garde sense of syncopated rhythm inside a zoo, contrasting the artificiality of the wildlife sets with the primal creatures that roam them—a noted divergence from the still messy but ultimately blunt stillness of violence in Black Coal, Thin Ice.

The direction this heads in as Zenong and Liu orbit one another–seeing in each other different modes of opportunity to be finished with this severe and savage underworld–should not be surprising to anyone familiar with film noir. Before long, so many deals and betrayals have been struck and sudden bursts of chaotic ultra-violence indulged that any genre fiend should be satisfied. It should not go unsaid that this features one of the best deaths via umbrella in cinematic history, a gore gag that seemingly comes out of nowhere but makes more sense when the heightened style is reconsidered.

Ultimately, however, this film is fascinating because of how those genre thrills are complicated by these off-kilter, idiosyncratic formal choices that trigger not just a lurid dreamscape and uncomfortable humor (that singing head in the hall of mirrors!) but also a vulnerability in the face of alienation and suffering. Watching Wild Goose Lake feels like watching a society crumble in real-time, the architecture itself decaying and being painted over while people’s baggage and experiences become more and more exposed–including peripheral damage Zenong clearly never considered, and which the final shot does attempt to provide some relief for. We observe a machine pointed towards inevitable destruction but still populated by the flawed human outbursts of wounded emotions and imperfect decision-making.

The Wild Goose Lake screened at the Toronto International Film Festival and will be released on March 6, 2020.