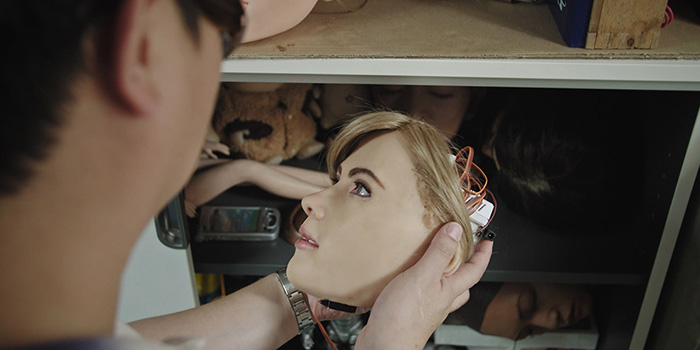 TIFF Review : ‘The Truth About Killer Robots’ Looks at the Future from a Machine’s Point-of-View

The title to Maxim Pozdorovkin’s documentary The Truth About Killer Robots is intentionally sensationalized for the same reasons a real newspaper article about the death by machine of a Volkswagen factory worker would be accompanied by a photograph of a terminator. James Cameron put a face to the concern humanity has about artificial intelligence and technology — that some type of uprising will occur once we either wrong our creations or prove the catalyst of our own extinction and thus the “disease” needing to be eradicated for survival. We joke about Skynet going online and our assistance in bringing ourselves closer to that reality because we like dismissing fears as things only in our heads. But the threat robots pose isn’t imaginary. It’s just not quite what fantasy presumes. Pozdorovkin rightfully lays the framework of his film upon the thesis Isaac Asimov put in-motion as far as parameters to govern machines. The first law is that robots cannot harm humans. The second is that they must follow any order a human gives them provided that the task won’t cause them to break the first. These are simply rules to live by and ones we can generally agree are necessary safety precautions. And we more or less followed them at the beginning of our evolutionary track towards automation. We built devices with emergency off switches, kept them securely behind cages so as not to accidentally harm workers, and affixed sensors as fail-safes when someone got too close. We toed the line and got comfortable. With comfort come mistakes.

This inevitable complacency is what Pozdorovkin focuses upon. He moves through the progression of real-life robotic integration to show how one influenced the next and how we as users and creators kept pushing the line of responsibility and morality further out of reach. It starts with the manufacturing sector, moves to the service industry, and continues to the scary truth that we’ve already blurred the line once clearly separating man from machine. And there really wasn’t anything we could do about it due to the rapidity at which we advanced. Technology built to improve our way of life brought with them the gradual demise of self-sufficiency. The longer we leaned on and became beholden to machines, the easier it was for our fears to subside. Narrated by a Kodomoroid (Japan’s childlike android newsreader), the film is ultimately presented as a story told from the robot’s point of view. It’s a history lesson that takes us through the adolescence of the technology and the shifting parenting skills that have allowed it to quickly shed its stigma as being “other.” We hear from engineers that speak about taking machines out of their cages and working towards increased interactivity under the veil of safety. We hear from CEOs about how automation is a godsend for their bottom line and the security of their employees, each one feigning ignorance about the transformation demanded from their reduced number of workers. And of course we hear from those 9-to-5ers themselves and the struggle this new world order has created.

Pozdorovkin doesn’t have to inject himself into the plot for us to understand what he’s saying. The juxtaposition of those excited about robots and those supplanted by them speaks loud enough for everyone. You can’t get a better understanding on the wage discrepancy today than hearing their contrasting opinions and receiving the false analogy describing how we’re experiencing a similar shift forward as when manufacturing overtook the farm industry. The difference of course is that the former supplied jobs to offset the imbalance. Our present trajectory towards full automation does the opposite. So while companies continue seeing increased profit, they do so on the backs of a dwindling middle class unable to keep pace. Add an intrinsic dehumanization and things start to get ugly fast. But we know this. It’s happening right now. Our complacency turns to laziness, our laziness into ambivalence. We use products and services we know to be destructive because it buys us extra time and convenience. Our memories have been reduced along with cognitive functioning and we’ve become anti-social in a way that turns conversation and debate into polarized screaming matches that do nothing but sow increased tension and division. We define machines as being “only as smart as their user” and thus shift blame upon the victim. We provide consumers products that sell an idea and foster it until we forget to double-check their work at the risk of our lives. Now we’re seeing innovators weaponizing those “malfunctions.” Now we’re creating robots to intentionally ignore Asimov’s two laws.

So while The Truth About Killer Robots doesn’t tell us anything we don’t already know, Pozdorovkin expertly curates these stories, philosophies, and dangers into a narrative that explains how Skynet should never have been our greatest fear. It’s always been ourselves. We are our own worst enemy and it seems we are driven to prove as much time and time again. The more we make machines sympathetic, the less sympathetic we become to man. The more we use tools to marginalize and profile, the less we’re actually talking to people to understand their humanity as more than a blanket label built upon dangerous connotations. We have literally devalued our own lives and wonder about the cost. Forced to become robots ourselves to survive, we’ve sacrificed compassion for competition.

The Truth About Killer Robots screened at the Toronto International Film Festival and will have its US premiere in late November 2018.