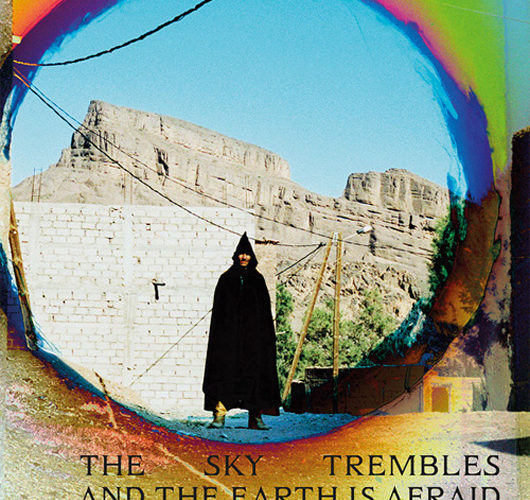 Writer/director Ben Rivers‘ The Sky Trembles and the Earth Is Afraid and the Two Eyes Are Not Brothers is a lot more than merely a movie. It is quite literally a work of art—and to say that doesn’t presuppose other movies aren’t. This film is the culmination of multiple installations, adaptations, and meta-narratives: a document of the full project that places its theme inside one of the most recognizable short stories of the twentieth century to play on the illusion of cinema. Begun as part of Artangel’s Open initiative which funds site-specific commissions across the United Kingdom, its concept soon sprawled into one of sites within sites. Rivers’ initial show occurred between June 26th and August 31st in London using vacated BBC sets and spaces much like his feature film centerpiece utilized the oft-abandoned deserts of Morocco. This is a mammoth undertaking for both artist and viewer because there’s a ton of exposition to parse in order to fully enter Rivers’ vision. Described as observational documentary meets a surreal descent into chaos, I’d concur with my own comparison to Lost in La Mancha meets Hard to Be a God. Reading the synopsis is to become overwhelmed by the possibilities of Act One following Spanish director Oliver Laxe on the set of his own film (depicted with real behind the scenes footage from Laxe’s Las Mimosas) before Act Two heads into a rather exacting cinematic version of Paul Bowles‘ “A Distant Episode”. Half reality, half fiction—or is it all fiction in this context? Just because Laxe was actually shooting a film doesn’t mean this version of him in Rivers’ film is anything more than imaginary.

Bowles’ short is explained as a study of the cultural division between Europe and the Islamic world. There’s a sense of entitlement with the main character, a professor of linguistics, seeking to satisfy curiosity with no regard to how little he knows about the people he’s engaging. Rivers reappropriates this theme into the movie industry and its band of Westerners traveling wherever they want to hire natives for authenticity. We witness the frustrations this provides as Rivers includes (or more likely edits footage to appears as though) actor Shakib Ben Omar not doing what he’s told. Laxe yells cut because Shakib isn’t looking in the right spot. He laughs trying to tell the actor how to say a line. And in one scene, after a crewmember declares the cast tired, we watch Shakib irately voice dissatisfaction without subtitles. That last bit is crucial to understanding how we cannot believe anything onscreen. For all we know Shakib is performing a scene and saying God knows what to the camera, but the way Rivers uses it is to portray unrest. Laxe becomes an intruder as a result—one more European visitor come to use the Atlas Mountains and Moroccan Sahara for commercial purposes before leaving his sets behind like so many have throughout history. We don’t know what’s next for cast and crew; all we know is that Laxe can drive to town and relax in a hotel until the following day’s work begins. But what happens when the puppet master becomes the puppet? What happens when his notion of invincibility and superiority leads him into a situation of which he is powerless to control?

The tables turn as the normalcy of Europeans going in to do what they want makes way towards the Moroccans doing the same. Whereas we implicitly accept the former because money or exposure for the country’s tourism is exchanging hands, we automatically fear the latter. On the surface Laxe isn’t necessarily harming anyone or anything with malice as the men (known as the Reguibat in Bowles story) most certainly are once they mutilate and imprison him in a costume covered in clanging tin can lids with one eye hole to the outside. But that’s only to our minds and our interpretations of what it is we do. Maybe Laxe has desecrated a religious monument or damaged a local by forcing him to do something against his culture’s decency. Perhaps his sentence more than fits the crime. This is the illusory nature of cinema that Rivers places at the forefront of our consciousness to decipher. By mixing real with imaginary we must question the validity of each. A movie set is similar—it’s make-believe encroaching on spaces to leech resources before abandoning them without a second glance in the name of entertainment. Laxe is doing it to the desert landscapes and its inhabitants while the Reguibat do it to him. They transform him into a comedy act of dancing for laughter, stealing him from a place of supposed comfort and selling him for profit. The final product is hardly important in such a transaction and we must wonder if the film itself is secondary too. Can the art be paramount to the physical world being displaced in order to create it?

If you’re willing to dig deeper into the concept these questions can be found with the final piece a Rosetta stone to interpret and answer them. Being able to watch it in the realm of Rivers’ Open installation within discarded London venues could only increase the impact ten-fold. The mark of the artist, capitalist, and consumer becomes indelibly linked to the locales altered by their process. We are as much at fault as those who were there because our want to consume fuels their greed to create. The Reguibat tell Laxe upon capturing him, “You were looking for trouble and now here it is.” We willingly take what we want at the expense of the void left behind. Why shouldn’t the displaced do the same? Why shouldn’t they get their pound of flesh to teach us a lesson?

The Sky Trembles and the Earth Is Afraid and the Two Eyes Are Not Brothers is screening at TIFF.