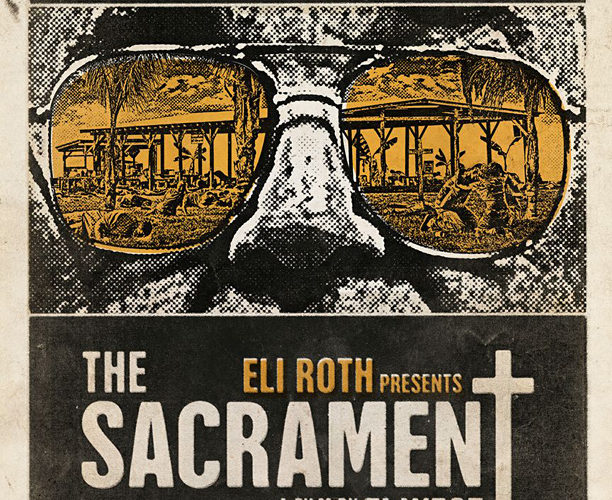 It can be said that emerging writer-director Ti West sets a certain expectation, making what some consider to be “anti-horror” films. There’s been the ’80s fetishization of The House of the Devil and sustained work-place malaise of The Innkeepers, the respective Satanists and ghosts of each almost an afterthought, as their protagonists wander around decrepit, vacated places of living. Yet with his newest, The Sacrament — a film inspired by the infamous Jonestown Massacre and its “drink the Kool-Aid” mass-suicide by a cult — its disturbing, grand climax is an utter inevitability. The film thankfully doesn’t completely race to this, but at least gradually reaches the point of true terror, even if one wishes it would delay the process to even greater lengths. While his past films were remarkably classical, opting for scares out of invisibility, The Sacrament is far more violent (possibly the influence of producer Eli Roth) with its blunt point-of-view camerawork and disturbing imagery, including a character lighting themselves on fire, making for its roughest, most unforgettable sequence. Not unlike his past films, however, the set-up is patient; three Vice Magazine journalists (complete with the actual Vice logo and all) head into a closed-off community by the name of Eden Parish, where one of their sisters, Caroline (Amy Seimetz), has retreated, cutting off contact with the rest of the world.

While their first attempt at entrance is met with pointed guns, they manage to ease, somewhat, into this society, questioning the various members about their way of life. (Removal from existing social circles and their rehabilitation efforts are chief among the inquiries.) The proceedings start to get creepy upon the entrance of the community’s founder, a man known only as Father (Gene Jones) who, initially, laughs off the journalists’ questioning, only to summon violence once they start to truly interfere. Rather than yet another found-footage horror film, The Sacrament exists as a “Vice Guide to Travel” episode from hell, replete with explanatory title cards, which give it the gloss of a finished product, and is thus far more chilling in its implications than a simple abandoned VHS tape. Nevertheless, the questions exists as to who’d be the audience of this very Vice episode; genre fans waiting for it to hit the fan, or someone actually wanting to know the inner-workings of a cult?

And this is where The Sacrament becomes difficult. Deciphering its exact relationship to Vice, Ti West expressed in the post-film Q&A an admiration for them, yet throughout, their ethnographic intentions seem suspect or extremely ill-advised. While the plaid-wearing journalists aren’t necessarily the instigators of the madness that ensues, it’s undeniable that their presence plays closer to a harmful intrusion than some heroic investigation. The “arrogant young American” angle is evidenced in the casting of currently-familiar indie actors: A.J. Bowen as Sam, the lead journalist who’s rightfully suspicious from the start, yet played by the actor with just the exact amount of subtle hipster smugness; and Joe Swanberg as Jake, the appropriately aloof and, at times, faux-macho adventurer cameraman. Yet they’re countered by Amy Seimetz, seemingly gracious until it’s revealed she’s the right-hand woman of Father, her natural warmth making the actress remarkably well-cast. It’s thus easier, at times, to sympathize with Eden Parish than the Vice trio, but with everything being through their lens, as well as the need for an eventual genre kick, the exploration of this society ultimately feels somewhat short-changed.

But if The Sacrament is muddled in execution, it’s at least partly satisfying as a genre exercise — genuinely creepy and upsetting, the picture showcases West’s ability to make even a tired subgenre marginally fresh. It’s just hard not to wish they didn’t skirt the lines of their subject matter.

The Sacrament screened at TIFF. One can see our complete coverage by clicking below.