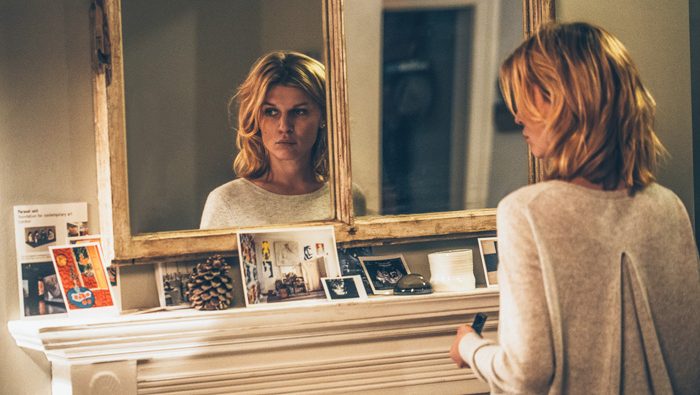 [TIFF Review] The Ones Below

With comparisons to Hitchcock and Polanski, David Farr‘s directorial debut The Ones Below starts behind the eight ball straight away. There are definite moments that conjure both masters of suspense, but I’m not sure how much further they reach beyond simply sharing a genre. This isn’t the fault of the idea or actors—the former providing room for thrills and the latter enthralling in duplicitous and psychologically damaged roles—but Farr’s inexperience behind the camera. He often shifts abruptly through time in a disjointed fashion, helping disorient us towards the truth while also increasing our frustrations stemmed from gaps in detail. In the end he still finds himself positioned to surprise with an unexpected turn, but sadly erases such promise by merely delivering exactly what we expected him to from the start. The awkwardness arrives during the opening credits with a blown up ultrasound filling the frame. It’s welcomingly oppressive initially as an eccentric choice to introduce the central idea of pregnancy running throughout, but quickly turns creepy in its freeze frame of black eyes. Had the film continued in this direction and made the fetus complicit in what follows, I might be singing a different tune. Instead the moment becomes but one instance of deflection amongst many—a red herring with more intrigue than what’s actually supplied. After all, the baby is little more than a MacGuffin driving the plot forward. It’s the act of being pregnant that proves paramount, not any supernatural evil in birth. Kate (Clémence Poésy) and new neighbor Teresa’s (Laura Birn) matching baby bellies are what bonds them and ultimately breaks them apart.

Farr constantly sets up nefariousness everywhere. As an example he ensures Teresa’s husband Jon (David Morrissey) first appears shrouded in a cloud of antagonistic mystery, eavesdropping on people talking behind his back with a quiet impatience. Like the sonogram, though, it’s an attempt to distract us with a juicy piece of potential conflict despite a series of jump cuts rifling through events so fast I literally had no idea what was happening already succeeding in that goal. Are Kate and Justin (Stephen Campbell Moore) moving in or have they always been there? When did the downstairs inhabitant die and how haven’t they run into Jon moving in and cleaning the garden? If these actions are inconsequential, why include so much unnecessary information? Just start the film with Kate badmouthing Jon’s landscaping and let the tension rise from there. Instead we find ourselves questioning Jon and Teresa’s motives from the start. This is surely intentional since we’re meant to align ourselves with Kate’s innocence, but it does a disservice to the sense of uncertainty thrillers like this one demand. Add the grandstanding from Morrissey when tragedy befalls his unborn child and you see Farr’s experience on the stage showing through. There’s very little subtlety in play as every moment of silence gets interrupted by the precisely calibrated score forcing us to treat each detail like a big deal with multiple interpretations when most of what occurs is bluster. Kate’s history with her mother is sprinkled in with grave importance rather than explicit fact; Jon’s temper and Teresa’s unpredictability become over-saturated; and marital bliss is blatantly contrasted between one couple’s realistic mess and the other’s fabricated joy.

Act One holds promise in its desire to go over-the-top. Kate and Justin are painted with extreme empathy while Jon and Teresa come off as lunatics. There’s a Stepford quality to the newcomers going on and on about the importance of children and their determination to get everything they want. Then Teresa’s accident is handled so melodramatically that I thought she could have done it intentionally. Hers and Jon’s malice in its aftermath is so clinical that it being phase one of some elaborate scheme was a certainty. But just as I started to grow my hatred and mistrust for them, they up and leave. They become decent people, acknowledging their misdirected anger and agreeing space can mend their fences. Could Kate and Justin be the bad ones? So selfish and sociopathic they’d rather be right than compassionate? Act Two rotates things back by rendering Jon and Teresa shadily kind. We must question their motives whether Kate’s psyche starts unraveling or not. Farr changes how we see his characters so many times to cultivate twists and turns that he breeds inconsistency in the process. It’s too bad because he had begun to win me over after Kate’s paranoia goes full-blown loony bin and my expectations dissolved. The missteps and half-baked maneuvering would have been worth it if he stuck to his guns and delivered an ending that turned my assumptions on their head. It would have been hard to swallow due to his propensity for splicing in short vignettes of Jon and Teresa doing what Kate believes, but originality can always trump plot holes. Bow-tied “this is what really happened” reveals meant to shock do not.

I wasn’t shocked. What we receive is what Farr foreshadowed all along. Poésy does her best to dig into her role’s complexity, but even she becomes a distraction that never fully alters our gaze. It’s too neat a puzzle with pieces fitting together too easily by the climax, exposing the majority as empty filler. Morrissey and Birn are just wild enough to risk toppling its pristine sheen, but Farr never goes far enough to let them. Whenever they reach maximum overdrive to shake things up, he reins them in to have us thinking we’re crazy for thinking they are. The Ones Below needs some B-movie embellishment to set it apart from every other wannabe thriller, but it hopes it’s too serious for such things. So exacting and severe, we see the strings and grow bored of their inevitability.

The Ones Below premiered at the Toronto International Film Festival and opens on May 27.