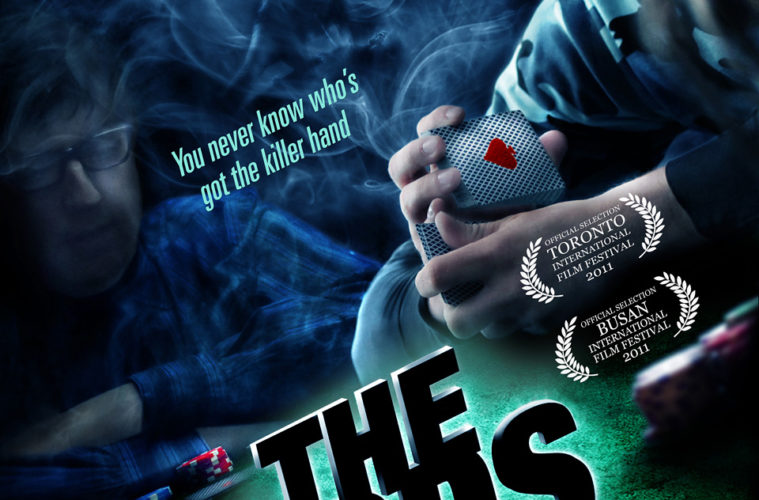 The Toronto International Film Festival media blurb for Simon Davidson’s debut feature, The Odds, likens it to a combination of Rounders and Brick. While this statement is true to a point, the comparisons remain solely on the surface. Poker plays a very small role—as gambling in general looms large—and while the plot concerns teenagers who are way over their heads in adult matters and murder, the hyper-reality of Rian Johnson’s contemporary classic is nowhere to be seen. Such broad generalizations end up doing the film a disservice by trying to pigeonhole it into a set of parameters the target audience will be familiar with. Unfortunately, The Odds can’t live up to those lofty expectations, but that doesn’t mean Davidson hasn’t crafted an entertaining thriller worth a look. Just like its lead character Desson Orr, though, it deserves a chance to stand on its own two feet.

An intriguing character from the start, Tyler Johnston’s boyish Tom Cruise looks and mannerisms give Desson a mix of popular bad boy and geeky straight-A student. Subtle drops in the script allude to the fact he might have been on the Math Team sophomore year; his use of the term “Coach” in regards to his physical education teacher makes us believe he’s a Sabres for some sport; and the constant questioning, “What’s happened to you lately”, has us wondering if the cool confidence exuded is a brand new feature to his life. With a cocky grin plastered to his face and a smooth air of importance when scooping up best friend Barry (Calum Worthy) to check out a high school wrestling match, you’ll begin to think Desson owns the place. But while his connections have reach and his charisma snags the friendships of both sexes, that strength is merely a façade hiding the fear consuming him ever so slowly.

Davidson propels us into the action straight away, refusing to keep the illegal gambling his film’s synopsis to a kid’s Prohibition style basement. These kids want more than dice and cards—they like betting odds too. And what better sporting level is there to wager on than high school? Students compete solely for the love of the game, taking pride in the girlfriends and parents cheering from the stands. So, when the whistle blows to open the wrestling bout, there is an unusual amount of boisterous applause cell phone chimes ringing. While the kids lay it all out on the mat, graduate Paul Morrow (Jaren Brandt Bartlett) is texting odds and receiving bets from all over the gymnasium. Everyone is fully invested, deflated cries and rapturous jubilation heard with every pinned shoulder. It’s Desson’s and Barry’s latest opportunity to dig out from their personal monetary holes, their dire situations made worse when it appears Sam Cartier (Julian Domingues) takes a dive.

The aftermath of the evening doesn’t seem too bad—Sam’s denial of a payoff leaves Barry with a black eye before the boys decide to hit up Paul’s house for a chance to recoup their new loses. But the stakes soon heighten when Desson spies on an argument outside between Morrow and an older gentleman he doesn’t know (Kim Kondrashoff). When the Paul returns, Desson lets his curiosity get the best of him as he inserts himself into a conversation between the young gambling ringleader and Barry about payments due. Things get heated, debts are called in with threats, and what we assumed to be friendships prove business partnerships based on unspoken deals. But even after violence becomes commonplace and the games turn heated, the fact of the matter remains that we’re talking about high schoolers at low-ante tables. They laugh derisively with the challenge, “What are you going to do about it”. And we smile right along with them until the lifeless form of Barry is found hanging in his garage. Now The Odds becomes the murder mystery we knew was coming. Paul’s friendly demeanor turns sour as it seems he’s being squeezed for cash by someone higher up the food chain, the full scope this basement party’s logistics comes to light, and whispers of a high-stakes gambling joint called Wang’s are heard. We watch Desson entrench himself into the suicide as his life falls apart, the desire to prove foul play exposing the slightest hint of guilt. Trouble with his new girlfriend Colleen (Julia Maxwell) and his widowed father (Robert Moloney) selling their house only makes sleuthing through a dangerous underworld one more worry a kid his age shouldn’t be burdened with. But in his position—cunningly playing both sides of the illegal casino—makes him the best shot at finding Barry’s killer while the police look to dismiss homicide completely. His search begins with Paul, Sam, and a bag of money, continuing down a rabbit hole much deeper than he ever could have anticipated.

Like most debuts, Davidson’s is not without problems. The most glaring issue is the acting, whether due to unpolished talent, the director’s inability to pull good performances, or the cast’s mistake at making everything more hard-boiled than it should be. Johnston is the worst culprit of the latter as his overt smugness dismantles the realism of softer moments alongside Maxwell’s misunderstood ‘bad girl’ and Worthy’s fantastic small turn. Bartlett could have used more grit as Paul, although his human side does add a nice layer to the villainy; Domingues should have dialed down his menace, trying too hard to be Tug from Brick; and Scott Patey is a welcome bright spot, consistently walking the line of friend and foe authentically as Desson’s trash-talking rival Benson. But despite any miscues, Davidson proves his talent behind the camera by keeping things interesting and never shying away from telling his adult story with children. This yarn is just intricate enough to keep us on our toes and chock full of brilliant deflections, forever shielding the final reveal until the last possible second.

The Odds plays at the Toronto International Film Festival on September 12, 14, & 17.