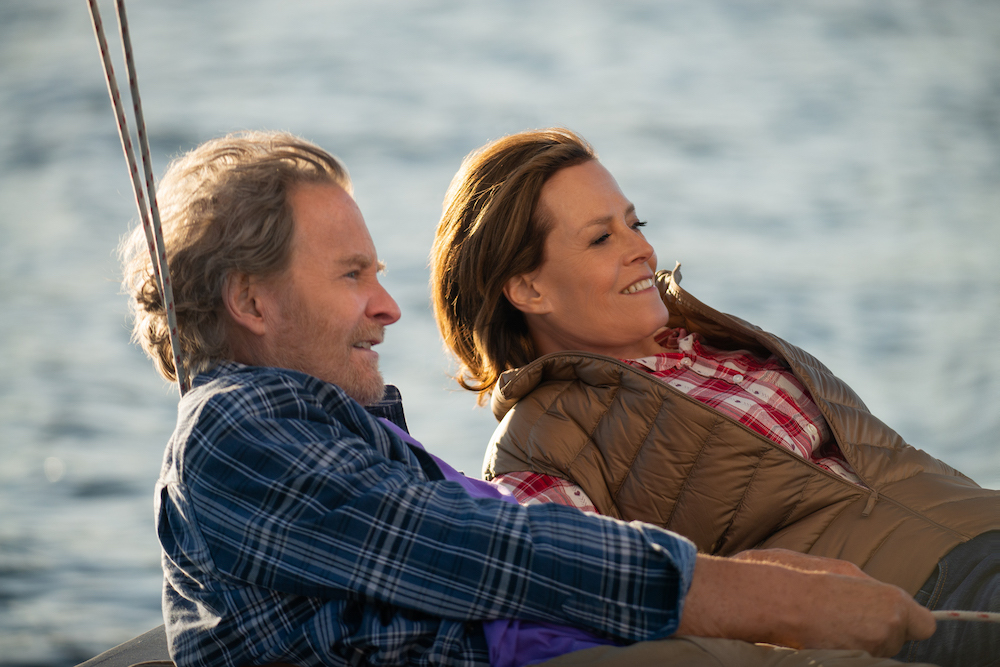 The Good House is roughly one-half of an utterly wonderful, character-driven comedy-drama. But one-half is insufficient to classify anything a success. That is true even when the entirety features an exceptional lead performance from Sigourney Weaver, the actor giving her most full-throttle, deep-throated, go-for-broke role in years as Hildy, a real-estate agent who erects a steely facade. Hildy’s world in the New England town of Woodhaven is in fact gripped with conflict, her current life revolving around a struggle for sobriety.

Many of these elements, and their refreshing allowance for deep character flaws, are positives. And, for these, directors Maya Forbes and Wallace Wolodarsky deserve praise. But Forbes, Wolodarsky, and co-writer Thomas Bezucha made several miscalculations in their adaptation of Ann Leary’s 2013 novel—chief among these the way-too-significant amount of time spent on, well, nearly every non-Hildy onscreen. Only a local contractor and old flame of Hildy’s, played by the great Kevin Kline, resonates; in fact, he’s criminally underused.

Still, the filmmakers never go wrong with Hildy. Long divorced—her husband left her for another man—she dotes on her granddaughter and dutifully contributes to her youngest daughter’s rent. (“I’m happy I can help and I’m hoping I won’t have to help forever,” she says, a line Hildy has certainly uttered before.) Most interestingly, Hildy is presented as a quasi-problem drinker. Is she an alcoholic? Hard to say. Her children think so, and, as we see in flashback, orchestrated an intervention to share their feelings. Hildy has an answer for everything, including her DUI: “I tapped the car. I tapped it. There was no damage, no one was hurt. It just happened to be that idiot state trooper.”

Audiences will likely be on Hildy’s side, and the casting of Weaver is a major contributor. “It was too bad the girls never met my mother because then they’d know what a real alcoholic looks like,” Hildy says with a frown, and nod approvingly. One tricky decision that does prove effective is having Hildy break the fourth wall and speak directly to the audience. This tactic runs the risk of being obnoxious, but thanks to Weaver it works.

Unfortunately, the film loses much of its appeal when focus shifts from Hildy to other citizens of Woodhaven. We meet Rebecca, a relatively new resident played delightfully by Morena Baccarin, and Peter, a psychiatrist played by Rob Delaney. They are fine, if unmemorable. The only supporting character to really grab our attention is Frank Getchell, played with relish by Kline. Reteaming with Weaver nearly three decades after Dave, the actor is charming, as always, in virtually every second he’s onscreen. For most of the film it is clearly a secondary role; until the second half, as much time is spent with Rebecca as it is with Frank. Happily, Frank becomes a more crucial player as events progress. But The Good House suffers any time Hildy is not onscreen, an issue Forbes and Wolodarsky never overcome.

In fact, the increasing focus on the secondary characters almost sinks the film with a maudlin and unfocused second half. After a boozy Thanksgiving—one of The Good House‘s finest scenes—even Hildy loses much of her appeal. Yet Weaver stands tall, even as the film does not. Seeing an older woman riddled with flaws feels refreshingly honest. Hildy contains multitudes, and one could even see her as the protagonist of a series—a form often more willing to wrestle with unlikable character traits than film. Perhaps extra time would’ve added further layers of nuance to the role and enhanced the weight of these supporting characters. The Good House ultimately gets more right than it does wrong, but just barely.

The Good House premiered at the Toronto International Film Festival.