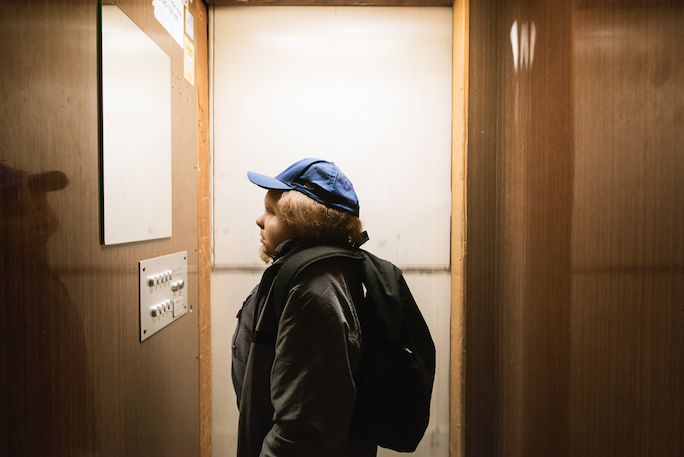 In The Giant, what lives and breathes as a compelling documentary morphs quickly into a kind of mythological fantasy when it steps outside its mode of social realism. Credit must be given to first-time feature director Johannes Nyholm, his special effects team, and his lead Christian Andren for pulling off a miraculous technical feat with a narrative that almost never steps outside of its fantasy world — until it does.

Andren plays Rikard, a sympathetic autistic man born with a several defects including a massive tumor which has taken over half of his face including an eye. Nyholm opens the film on a pétanque court, one of the few pastimes that gives Rikard pleasure, shortly before he’s abruptly and accidentally struck by a metal ball in the back of the head and blamed for the accident. In a particularly stark scene, Johan Lundborg’s camera lingers on the back of his bloody head and those that have come to assist while others watch in shock. For a narrative feature film, it’s selective in its perspectives, providing the kind of narrow window documentaries do into the lives they chronicle. It only breaks this framework for its fantasy sequences, a dramatic reveal involving his mother, and an ending that feels a little disingenuous, even for a sports drama.

For what it’s worth, I was initially duped. It’s not until later in the film when it becomes abundantly clear this is not a documentary. Andren externalizes Rikard’s own states through the use of striking special effects where he envisions himself as a 200-foot giant ready to go to town and destroy his opposition, breaking from the film’s realistic long-take approach. Recreations and externalizations are certainly a technique documentaries use and occasionally it felt organic to the story here. When he awakes he discovers he’s been kicked off his team and reteams with Roland (Johan Kylen), a sidekick that recognizes Rikard’s natural talent and encourages him to make a comeback despite vile taunts.

The film’s performances, settings (often institutional), and editing seem to find an emotional honesty and realism that narrative sports films simply can’t achieve, even as it continually shape shifts from a gritty Dogme 95 mode to the magical realism of Pete’s Dragon. The Giant is an odd film with a strange magical power that makes for a rare and original beast of a picture. It’s a sports movie about an obscure sport (at least for a North American audience) where its journey is more or less the destination as Rickard is inspired against the odds to become a champion.

The Giant is currently playing at the Toronto International Film Festival.