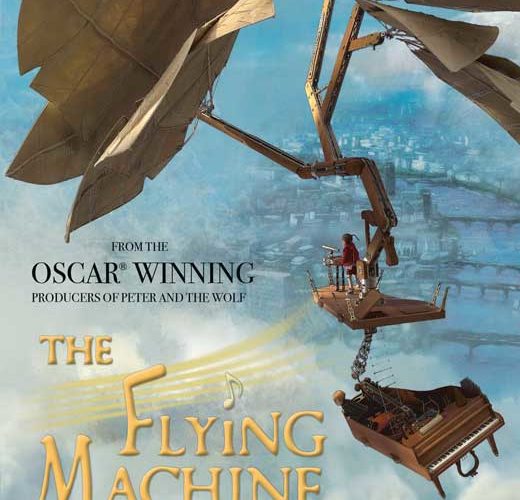 The Flying Machine, directed by Martin Clapp, Geoff Lindsey and Marek Skrobecki is an ambitious combination of 3D and live-action, while having the longest stop-motion take in history. It is produced by Hugh Welchman, the producer of Oscar-winning Peter & The Wolf. It also stars Lang Lang, the internationally-known Chinese pianist, who performs the etudes of Frédéric Chopin. And while The Flying Machine incorporates many interesting styles, the didactic storyline and the lifeless acting is pretty difficult to watch.

Georgie (Heather Graham) is a single mother of two children and a workaholic. Her daughter Jane (Kizzy Mee) loves the piano and insists that her mother take her and her brother Fred (Jamie Munns) to a cinema/piano performance by Lang Lang called The Magic Piano. Georgia does not pay attention to her children and to the performance because she is on her cellphone the entire time. At the end of the performance, Georgie falls into the world of The Magic Piano to find her children. Her children, in the meantime, are sailing on the Flying Machine to look at the landmarks of Chopin’s life. They do not believe that their mother loves them. At the end of the fantastical journey, they all come back to reality with a different family dynamic. The Magic Piano is a poignant stop-motion short film within The Flying Machine. It is about Anna and her wish to be with her father again. She and her father lost their home, so her father drops Anna off at her cousin’s so that he could work. Her cousin is a younger blonde boy who is dressed as a vampire. It is clear that Anna dislikes him. They accidentally go on a journey together on a magic piano, the flying machine. Anna’s goal is to reach her father, but on the way, encounters several obstacles.

This short film is beautifully crafted. The figures are made out of silicon to create a sense of realism. The etudes of Chopin, performed by Lang Lang, accompany the scenes of this film, and does not contain any dialogue. The Magic Piano is the reason one would want to see this film. I have always appreciated the craft of stop-motion, and The Magic Piano is one that deserves praise.

Unfortunately, stop-motion is surrounded by the excess fluff. When Georgie, Jane, and Fred are in the world of Piano, the plot falls dead. The Polish government commissioned the filmmakers to create an educational film about Chopin to mark his 200th anniversary. Jane reads the life of Chopin in such a pedagogic manner, like reading from an instruction manual.  This approach to making an educational film is dull and uninspired. The digital effects during the live-action scenes are also mediocre. Bright colors are in full-effect, but they are not artful renderings. The sketchy animation scene in the live-action world is one effect that was done well.  Georgie sees the 2-D animation of her children and Chopin within the pages of his etude book. It looks like a rough sketch of an animation, which is an interesting style for this film.

The Flying Machine is essentially the celebration of music, and Lang Lang’s performance on the piano is, of course, remarkable. The Magic Piano is another redeeming factor of this mediocre film. The music, the story and skilled renderings of the atmosphere and characters are all very beautiful. The external parts are not. It is predictable, dull, and at times, cringe-worthy. What give this film an average score are the music, the animation and the varied visual effects techniques.