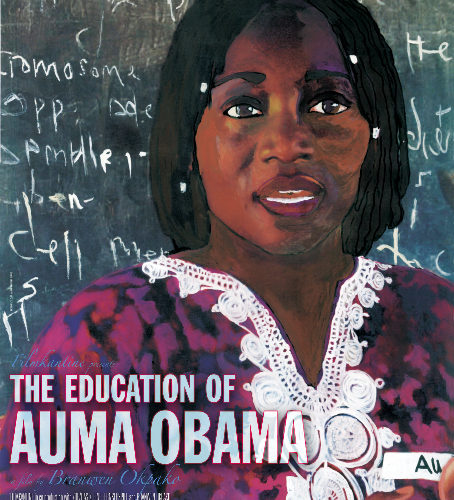 The Education of Auma Obama is a compelling character sketch of the internationally-educated half sister of President Barack Obama. She currently resides back in her native Kenya, working with youth to encourage political and social engagement, carrying on the tradition of her Freedom fighter father. The film is useful in exploring post-colonial identity but messy in its construction, including several juxtapositions back and forth both geographically and temporally, often with a bit too much interest in the historic 2008 election of her half-brother.

Directed by a film school friend of Auma, Branwen Okpako traces the often not-so-linear roots of an education, particularly in Sub Saharan Africa. The film is not quite as powerful a portrait it might have been had its focus been slightly narrowed, then expanded on. Colonial African history is a complex and often charged obstacle to document. The best documentary I’ve ever seen is the highly condensed and subjective Cameroonian film Afrique, je Te plumerai (Africa, I Will Fleese You) by Jean-Marie Teno. Understanding Auma Obama isn’t exactly key to understanding her half-brother, however a film unpacking the education of a person requires the exploration of the family, particularly Barack Obama Sr., a government economist who left Auma’s mother and brother Roy for the University of Hawaii. A good deal of the film is spent on details, which truth be told, I had to re-look up, and that is part of the problem of building a portrait of an “education”  – what is perhaps more interesting is the present, informed by the past. It exists here, but is not quite as vivid or engaging as it should be.

Auma Obama we learn is also a filmmaker, which would be useful, if only we saw more of her work (we see clips from her film All That Glitters). The connection between linguistics and film is rather fascinating, yet she turned her attention to direct support and education than film. Film itself is powerful, considered the father of post-colonial African cinema, Ousmane Sembene visual storytelling has its advantages over the printed word, especially in reaching, educating, entertaining and engaging illiterate audience members. Though Auma is a rather engaging figure, the film is can’t keep up. All of the facts are here, including videos of Barack and Michelle Obama’s visits to Kenya. The film does in 80 minutes what it could’ve done in 40, and with more time in the editing room a more compelling portrait could have been crafted.