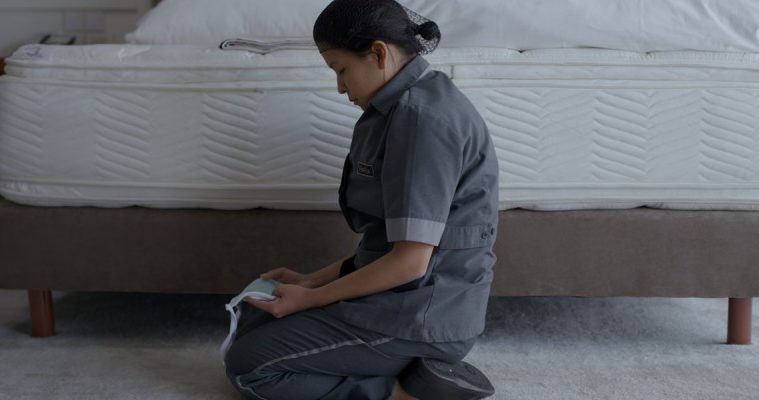 TIFF Review: ‘The Chambermaid’ Offers a Subtle Look at Inequality in Mexico City

Set entirely within the confines of a luxurious Mexico City hotel, mostly in rooms and service corridors, The Chambermaid is a fascinating observational drama and occasional allegory for the haves and have-nots. Gabriela Cartol stars as Evelina, a 24-year old single mother working on her GED in a program provided (and later canceled) by the hotel’s union.

Like Blue Crush, another film that contained explicit scenes of hotel maids cleaning up after guests, The Chambermaid doesn’t shy away from the usual demands of the job, from a guest who insists on having his room stocked with five times the amenities he needs to a wealthy Argentina woman who calls Eveline to her room to essentially babysit. When her son takes to Eveline, she’s given a tentative offer to leave the hotel behind for a new life in Argentina.

The hours are grueling with quick turnarounds and usual demands as Eve sets her sights on working in the hotel’s higher floors cleaning whole suites with in-room pools rather than more modest rooms. In her travels she encounters employees with side hustles, selling plastic containers on a quasi-layaway program and discusses the state of poverty Eve is raising her child in, without hot water. One of the perks of the job is being able to use the hotel’s staff facilities.

Approaching the subject with a documentary sense of realism, director Lila Aviles keeps a light touch. There are no grand emotional scenes as Cartol’s Eve makes it through the day. She encounters those from all walks of life: fellow workers trying to get ahead (and offering help, such as in an alarming scene where Eve’s period blood soils fresh bedding and she’s forced to see a supervisor) and wealthy guests, including a Hasidic Jew who asks a short-on-time Eve for help in getting to the lobby level.

For much of its running time, The Chambermaid operates as a subtle study of inequality, but what emerges before our eyes is a character study free of pretense. In fact, it often feels as if we’re watching Eve from over her shoulder in long takes working and trying to get ahead. She lashes out in one brief powerful moment in which she has a brief tryst with a window washer courting her. It’s an empowering scene that takes place some forty stories in the air as she seduces him through a window in a bid to regain a long gone desire.

The Chambermaid offers a sometimes funny and playful look into the inner life of Eve; nuanced and natural, it has a quiet and modest power as it comments on the ironies of contemporary cities like Mexico City and their growing economic divide.

The Chambermaid screened at the Toronto International Film Festival and opens on June 26.