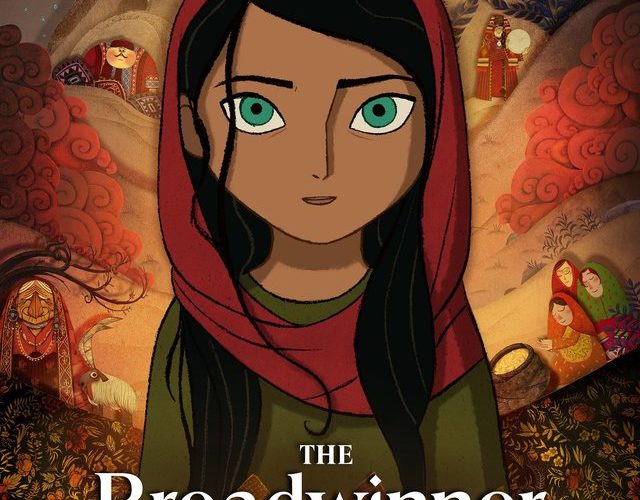 TIFF Review: ‘The Breadwinner’ is an Empowering Story of Heroism Under Duress

In the Taliban-controlled Afghan city of Kabul, Nora Twomey’s debut film as sole director (she co-helmed Oscar nominee The Secret of Kells) depicts an eleven-year old girl facing the futility her future inevitably holds. Adapted by Anita Doron from the award-winning novel by Deborah Ellis, The Breadwinner delivers a heart-wrenching coming-of-age tale within a nation that’s lost its way. The shift was virtually overnight once the Taliban took over: women forced under hoods and trapped in houses, photographs and books outlawed, and men turned cruel as “protectors” of an extremist interpretation of a peaceful religion. The city’s former glory is immortalized only through stories of those who still remember. And as they perish to be replaced with new generations raised in hate, the past risks being forgotten forever.

Parvana (Saara Chaudry) is one of the lucky few that knows this former life thanks to her ex- schoolteacher father (Ali Badshah’s Nurullah) who refuses to let her lose hope. They sell things at the market for food, the girl’s age allowing a modicum of freedom her mother (Laara Sadiq’s Fattema) and older sister (Shaista Latif’s Soraya) no longer possess. This doesn’t mean she’s not still judged, however. When a dog comes and ruins their blanket she yells at it only to be yelled at back by a young Taliban soldier drunk with power. The aftermath leads to Nurullah’s arrest (whether it’s unjust lies in your conscience because the oppressive rules governing them do deem him guilty), the worst thing possible for a family without another adult male.

What is there to do? Fattema and Soraya are forbidden to leave the house without Nurullah—even to visit the prison. Parvana can escape for small tasks like filling a pail of water, but no shopkeeper would risk jail for himself by selling her food or other necessary goods to survive. So when all seems lost there arrives two options: Soraya can be married to a second cousin willing to take them all out of Kabul (while leaving Nurullah behind) or Parvana can cut her long hair and pose as a boy to become the “man of the house.” Both options are ultimately put in motion for a harrowing race against time. If Parvana can’t somehow retrieve her father, they’ll have to go and never see him again.

If this seems somewhat heavy for a children’s film, you aren’t necessarily wrong. But the filmmakers use expert care to ensure the horrors depicted don’t go beyond those of villains to combat the good. There are beatings and gunshots, chases and yells, but without them you wouldn’t absorb the dire circumstances at-hand or the strength this little girl wields to rise above the injustice surrounding her. Ellis infuses Parvana with the gift of storytelling to stay positive and entertain others at risk of also resigning themselves to a fate of prison without bars. She tells of a young boy and the Elephant King who took his village’s food. And Twomey animates it as though cut paper, a gorgeously playful complement to the exquisite cell drawings of the whole.

She uses bright colors despite dark subject matter of impending war and death just as Doron creates complex characters that know the pain and suffering this new regime cultivates. Whether it’s the subtle expressions of sorrow shared by salesmen too afraid to help Parvana’s family or the Taliban soldier known as Razaq (Kawa Ada in a role appearing to be wholly original outside the source book), this new world order in Afghanistan is shown to not be cemented in the populace’s consciousness quite yet. The evil consuming many is pervasive, but the people who remember better times are still doing the best they can to hold it at bay. For every casualty by land mine comes a dream of freedom no matter the long odds to achieve it.

The latter comes through Parvana’s newfound excitement towards freedom alongside another girl posing as boy (Soma Chhaya’s Shauzia). They dream about where their lives could go if they earn enough money to leave—one wishing to take everyone with her while the other seeks a single ticket due to family troubles we can only guess from a line of dialogue holding immense weight. It really is amazing to experience the night and day reactions to Parvana as girl and boy, how easy it is for an entire city to ignore her as the former and accept her as the latter. This is the type of international reality young children should be exposed to if only to comprehend just how lucky they are to not endure the same struggle.

There’s still a lot of humor (Shauzia hijacks Parvana’s Elephant King story to welcome comedic effect) to complement the inspirational feats of courage and unfortunate shadows of hate bred from insecurity. The character of Razaq becomes important in this respect because he shows that change remains possible. It helps that he was married before the regime change and can appreciate a woman as more than the property this newest generation rejects them as. The Breadwinner thus becomes an empowering story of heroism under duress. It can be small (Nurullah’s refusal to be harassed by someone driven by emotion rather than intellect) or large (Parvana transforming herself to shoulder responsibility well beyond her years), but it always demands a people be judged by their best elements rather than worst.

The Breadwinner premiered at the Toronto International Film Festival and opens on November 17.