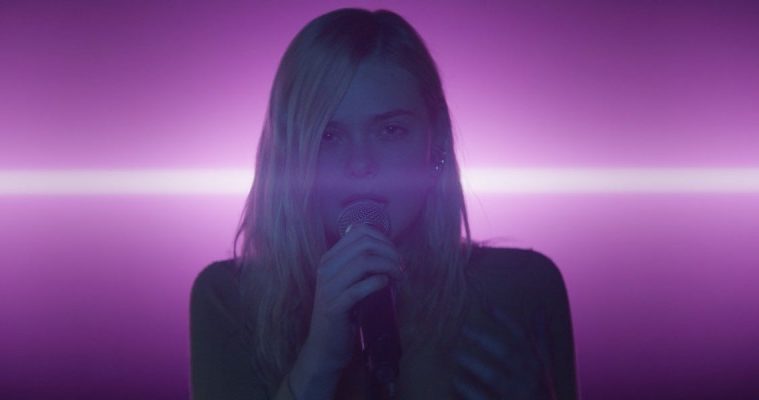 If you haven’t had enough underdog tales about kids from the wrong side of the tracks trying to make it big, Max Minghella’s directorial debut Teen Spirit hits all the usual check marks to provide a stylish if familiar entry to the theme. There’s the likable teen lead in Violet’s (Elle Fanning) Polish-British, Isle of Wight resident working her land and a waitress job all while attending school. The tough parent trying to instill a pragmatic realism meant to temper expectations that ends up working to destroy them completely (Agnieszka Grochowska). And of course the unkempt drunk of a sage veteran to guide her through the chaotic turmoil we can assume helped to derail his own past glory (Zlatko Buric’s Vlad). The vocation of choice: singer.

Violet is the consummate country mouse. She loves her horse, doesn’t have a social life, and sings ballads to a handful of drunks when she can (namely when her mother has a card game to distract from her absence). No one believes she can advance past the first audition of “Teen Spirit UK” let alone win a spot to perform on television during the London-set finals—no one but Vlad. Even though his past experience is the closest anyone in this tiny island village has to expertise, his motives are also selfish. His daughter is out of the picture, his career stalled decades ago. In Violet he sees a chance to be useful and a potential windfall of a payday if she earns fame. So they team-up out of desperation and find themselves knocking on opportunity’s door.

It’s a cutely precious scenario amplified by rock-infused pop songs and music video aesthetic, this shy girl blossoming into the sort of vapidly malleable soul record executives love to exploit and throwaway. And it works when we’re locked onto the island with drama Minghella has grown thanks to established bullies, past hurt, and (not so) surprising reversals of support. Violet is a firecracker in the making who gains confidence with each practice belting songs like Ellie Goulding’s “Lights,” the sequences shot with non-contextual crosscuts of moments in her everyday life against a static light show reminiscent of that song’s actual promotional short. Vlad is therefore here to add necessary levity to the otherwise self-serious depiction of an industry built to fast-track nobodies to the finish line without any of the grind.

Where their trajectory falls apart is London. The generic thing to do is hypnotize Violet with big city glitz, glamour, and men (previous contest winner Keyan) to fracture the relationship she has with her rock of an unorthodox manager/mentor and Minghella follows that template to the letter. It wouldn’t be all bad if some aspect came from home—some throughline of animosity that brewed to the point of spilling over. Unfortunately that chance is squandered by making a final round for the final round. As such, the drama is restarted with half the time to earn our investment. It’s simply not possible to stop things from feeling rushed, each freshly clichéd point of conflict evaporating as quickly as it arrived. All we can do is wade through the chaff and hope for a great performance to cement her identity whether victorious or not.

It is great too. Minghella has a handle on these concert visuals with an obvious affinity for the art this music produces. If Teen Spirit were a forty-minute short hinging upon that style without trying to say something, I’d give it a standing ovation. His failure is hoping he can stretch things to twice that length and still hold enough attention to forget nothing is happening. We realize the truth early, though, resigning ourselves to pretty pictures and catchy tunes despite his making an effort with Rebecca Hall’s record exec. She wants to sign Violet before the show, a maneuver that ignites animosity between she and Vlad. We never question how it will turn out in the end, though. The adversity is hollow—filler meant to give Violet a reason to self-implode. The result is a scene that feels badly out of place.

The reason is that the rest is surprisingly very subdued. Violet is quiet and unassuming—an ingenue in the making. Fanning delivers a ton of layers in that role, constantly struggling to make her mother proud while also having to lie in order to do so. She’s phenomenal under the lights too, especially when her confidence increases to rockstar levels. Her Violet is the perfect new world version of what Vlad had decades ago, his knowledge that she must discover who has her best interests at heart key to tying everything together. And for his part Buric is a scene-stealer. He moves from creepy old man to potential charlatan to father figure still haunted by his own demons. I may not love how Minghella causes the rift, but he admirably handles the inevitable repair.

So while the whole is less than the sum of its parts, there is a lot to like. The cast is unique, the visuals mesmerizing, and the music ready to get your toes tapping in the theater. Minghella shows a propensity for directing and room to improve on the writing side. With a little more depth and connective tissue to pair the start and finish with building drama rather than just isolated pockets that are solved before the next comes along, he could potentially make a well-rounded stunner. For now he has a calling card. Maybe he’d have been better off actually doing a few music videos first, but the three or four he’s made within this feature provide a nice sizzle reel nonetheless. I look forward to what’s next.

Teen Spirit screened at the Toronto International Film Festival and opens on April 12.