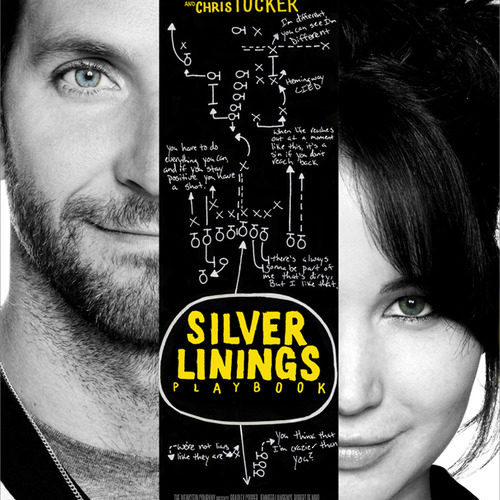 I know it’s misguided, but my interest in David O. Russell films kind of ended after The Fighter. This was a guy who used to pave his own path with challenging material and comedies that made you think. It’s not even that I disliked his true-life boxing tale, but where was the eccentricity? Where was the promise of subversive insanity that his sadly unfinished Nailed possessed? He showed he had the skills for the big time and I’m ecstatic he now has the mainstream clout for bigger budgets and box office appeal, but could The Fighter‘s success have ruined his originality? Of course it could and for a lesser auteur it very well might have here. But if his adaptation of Matthew Quick‘s novel Silver Linings Playbook is any indication, Russell appears to know exactly how to combine these two cinematic sensibilities.

A huge crowd pleaser, this eccentric look into a cast of unhinged characters searching for love in a world where it’s rarer than one might want to think fires on all cylinders. There’s drama and comedy with a little romance sprinkled in. There’s old love, lost love, new love, and real love as freedom arrives for Pat Solitano (Bradley Cooper) after eight months trapped in a mental institution rehabilitating from a violent altercation that left a man in the hospital and a wife hidden behind a restraining order. That is ancient history now—Mom (Jacki Weaver) received permission from the courts and took him home. Slimmer, calmer, and more optimistic than ever before, this rebirth into society presents the opportunity to be a better man and prove to his estranged beau Nikki (Brea Bee) that their futures are together. Unfortunately for Pat, his delusional mind is the only one that believes this to be possible. The town is afraid of him, his co-workers at the local school fear his temper, and his parents attempt to delicately let him know his past life is over and he must move on. Dad (Robert De Niro) hopes the upcoming Philadelphia Eagles season can cause a distraction while his best friend (John Ortiz) sees his wife’s (Julia Stiles) widowed sister Tiffany (Jennifer Lawrence) as the kind of kindred spirit perfectly suited to take his mind off Nikki. Between the younger Tiffany’s stalking and his father’s sports superstitions, Pat tries his best to ignore everything and read his wife’s students’ syllabus to have something constructive to talk about with her. If only he could do it quietly and serenely.

Cooper is very good as this undiagnosed bi-polar. Unable to filter his words or defeat his penchant for imploding when confronted by trigger song “My Cherie Amour” by Stevie Wonder, Pat will wake his folks up at 4am to rail against Ernest Hemingway, tell Tiffany his ongoing marriage is stronger than hers because her husband is dead, and use the trademarked Solitano temper to unleash a powerful wallop. There is a child-like innocence in his naïve fantasy of reconciliation clouding his ability to see the forlorn faces of those patronizing him by saying everything will be okay. If Pat is ever to shed his funk and control his mood swings it’s going to take a lot more than family walking on eggshells and his therapist Dr. Patel (Anupam Kher) ambushing him with things he already knows elicit an aggressively violent response. Lucky for him Tiffany is just the girl for the job. In what is her best ‘pretty girl’ role yet—she rocked Winter’s Bone but hadn’t wowed me in anything dolling her up as a sexual woman—Lawrence steals the show with her harshly barbed words and unapologetic attitude. So much in fact that half the theatre clapped after one of her most heated dressing-downs. This wouldn’t mean much in normal circumstances, but I saw the film at a Toronto International Film Festival press and industry screening. Half these people usually leave prematurely to hit another possible distribution deal and they never show emotion, let alone willfully applaud a movie screen when no one involved in the film is present to suck up to. This shows how likeably impulsive and unpredictable her role and performance are.

The plot inevitably pits these two together for a bit of back scratching as Pat’s marriage needs Tiffany to smuggle a letter to Nikki and her happiness becomes reliant on his promise to partner up and enter a dance competition. This premise alone will bring laughs, but it only gets better with the addition of a guy like Chris Tucker making his first non-Rush Hour appearance in a decade and a half to teach some moves of his own. A former hospital-mate at the looney bin, Tucker’s Danny is an emotional rock from a tough period that partners with Ortiz to stand by their man at what’s potentially his darkest hour. Between them, Weaver’s matronly saint cooking “crabby snacks and homemades”, Dash Mihok‘s compassionate yet ambivalent police watchdog, and Shea Whigham‘s tentative brother, Pat has an infinite well of crazy to feed from. But of all the supporting players, it truly is De Niro who finds a way to shine as a father whose apple didn’t fall too far. OCD in his football voodoo, the amateur bookie bets hard because he believes his broken son is the rabbit’s foot needed to score big. Temperamental and often uncontrollable, the similarities between father and son are uncanny—the only difference their differing generations. One’s abusive acts land him in a state mental ward while the other simply gets banned from the Eagles’ stadium. Silver Linings Playbook therefore becomes just as much about their relationship as the not quite love triangle between Pat, Tiffany, and Nikki. He needs to be able to live with himself, though, before any of them.

Heartwarmingly sweet and confrontationally cruel, the dynamic between Lawrence and Cooper is an unequivocal success. Their characters are virtually the same person at varying degrees of controlling impulses and the sarcastically flirtatious rapport is contagious. We see the writing on the wall and guess how everything will turn out, but it doesn’t matter since every moment they’re together is a worthwhile endeavor. A bit of personal, hands-on therapy, their willingness to not pull punches shows how coddling will only exacerbate the situation. Working towards their final dance number and the parlay bet surrounding it, the film becomes a quest for escaping the self-imposed prisons we erect due to thinking safety is as important as happiness. Life always has a silver lining; we merely need to accept the pain wrought in the meantime before discovering it.