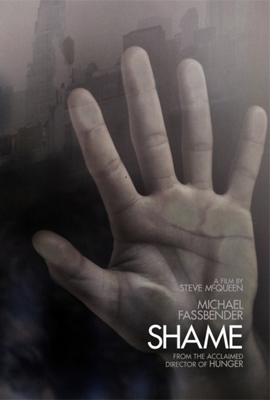 Three years after their first collaboration—and the director’s debut film—Steve McQueen and star Michael Fassbender return with the viscerally intense Shame. To call a movie assured to receive an NC-17 rating more mainstream than their previous Hunger is insane, but it’s true. Whereas that film took a more formal approach to the medium, leaving us in a visually stunning world without introducing the lead character until about a third of the way in, Shame definitely has more of a narrative voice. With that said, however, McQueen’s improved aesthetic style has remained. Utilizing the same masterful strokes of mise en scène, he transports us into Brandon’s (Fassbender) unstable existence. The juxtaposition of confident smirk on the prowl with vulnerable lost soul unable to overcome addiction resonates through the long takes, over-powering score, and in-your-face imagery. Combining to form a gut-punch of emotion, this film sends us down a spiral of chaos, ego, and fear as Brandon pushes everything of importance away to try and fill his insatiable urges.

In what is now a trademark of McQueen’s filmic sensibilities, the movie begins with Fassbender’s Brandon on the subway in silent pensive internalization. With only Harry Escott’s score playing, we cut between graffiti littered glass of a moving train car and the naked pacing through an empty apartment. He flirts with a pretty woman sitting across from him, their eyes lighting up in a sexual dance, as we continue to cut back home, Brandon circling from bedroom to answering machine. The static camera is waist-high on Fassbender, his nudity a signifier of his constant need for orgasm. The whoosh of curtains each morning and the subway’s rumble become part of the musical backdrop, a female voice in playback on the phone the only voice heard. We infer it’s someone close, his absolute lack of interest marking the void between love and lust. Attachments are barriers that Brandon wants nothing to do with. Life is sex and when he finds someone willing to comply, nothing will get in the way.

And this is his daily waltz. Where most need intelligent discourse and a sense of accomplishment to get through the day, Brandon yearns for sexual stimulation alone. His computers are full of pornographic material, bathrooms safe havens for pleasure’s release, not waste. Night’s are his playground and dark alleyways his bed. Impotent to love and the relationships bred from it, the casual rendezvous of physicality are his release from the suffering of withdrawal. Brandon could have any woman he desires: married, single, young, or old. His allure is powerful and his prowess unmatched. But this comes at the price of self-imposed exile from the outside world. The shame of his affliction means no one can be close enough to discover the truth. So when his sister Sissy (Carey Mulligan, who has never been better) arrives, the youthful exuberance and fervor for life drives him mad. Privacy is breached and sensibility maimed. Sex is as necessary to him as air, but when the physical and emotional cross, only destruction can result.

Set in New York City, no other location could begin to provide the rare mix of ‘access’ and ‘excess’ that McQueen states was essential following the Toronto International Film Festival screening I attended. For the tale he and Abi Morgan constructed to work, the environment consuming Brandon must be active 24/7 and always a rumored whisper away. With the reflective surfaces used throughout—many times to show faces often concealed as the camera films slumped shoulders from behind—both Brandon and Sissy become exposed to the public, their personal transgressions laid bare for all to see. Emotion is amplified by the sister and buried by the brother, his cold nature a brisk slap to her face and her willingness to show vulnerability an unconscionable act risking destroying the façade he’s wrought. New York is the perfect fractured world of cesspool sleaze and astronomically wealthy success. The silent business dealings of Brandon at work a means to and end, the monster inside his true identity. Through the course of the film we get to watch the one person who should matter become inconsequential and a threat to his very existence. Sissy reminds Brandon of what love is. The cloudy mirror she turns his way one that will shatter the illusions of sanity masking the human compassion pushed far back into the recesses of his body. He sees himself in her as Sissy’s sexuality lets loose. A causal romp with Brandon’s boss—an effective bit of brash smarm from James Badge Dale—illuminating the crippling pain of infidelity he so often ignores. She shows him his worst characteristics while also the hope to be better. If only he would include her in his life, he may be able to break free from the chains of his disease. He will try; he will lay his soul bare to attempt what seems to come so naturally to the world at large. But if such an experiment fails, he may never have the chance to escape lust’s prison again.

All of this turmoil and thunderous soul wrestling comes through Fassbender’s performance without artifice. His very being is physically and psychologically laid bare; the nudity of his body is no match for the emotion of his soul. His sly predatory grin at the start and flood of forgotten feelings while watching Sissy sing show the brilliant duality and struggle forever apparent. Although McQueen self-deprecatingly joked he’s like Mr. Magoo on set, it’s his direction and sense of composition that allows Fassbender to own the camera. The angular framing draws you in as the acting intensity captivates in multiple long takes of aggression opposite Mulligan and compassion opposite Nicole Beharie. And while the ending falls prey its many logical stopping points, the final sequence couldn’t have been chosen better.

But it is Shame’s climactic, sensory assault montage of the flesh that steals the show and remains burned to backs of my eyelids. Seen through a warm glow of artificial color and beneath a powerful score of harsh melodic tones, it’s an unbridled look at depravity that will consume you and spit you out unclean and in need of solace. Crosscutting past and present, sex and violence, men and women, the cinematic genius on display is both frightening and unyieldingly beautiful in its abstraction. An unforgettable sequence of carnal desire, McQueen forces the imagery through your retinas and leaves you forever altered. I don’t think I’ll be able to shake it any time soon.

Shame is playing at the Toronto International Film Festival.