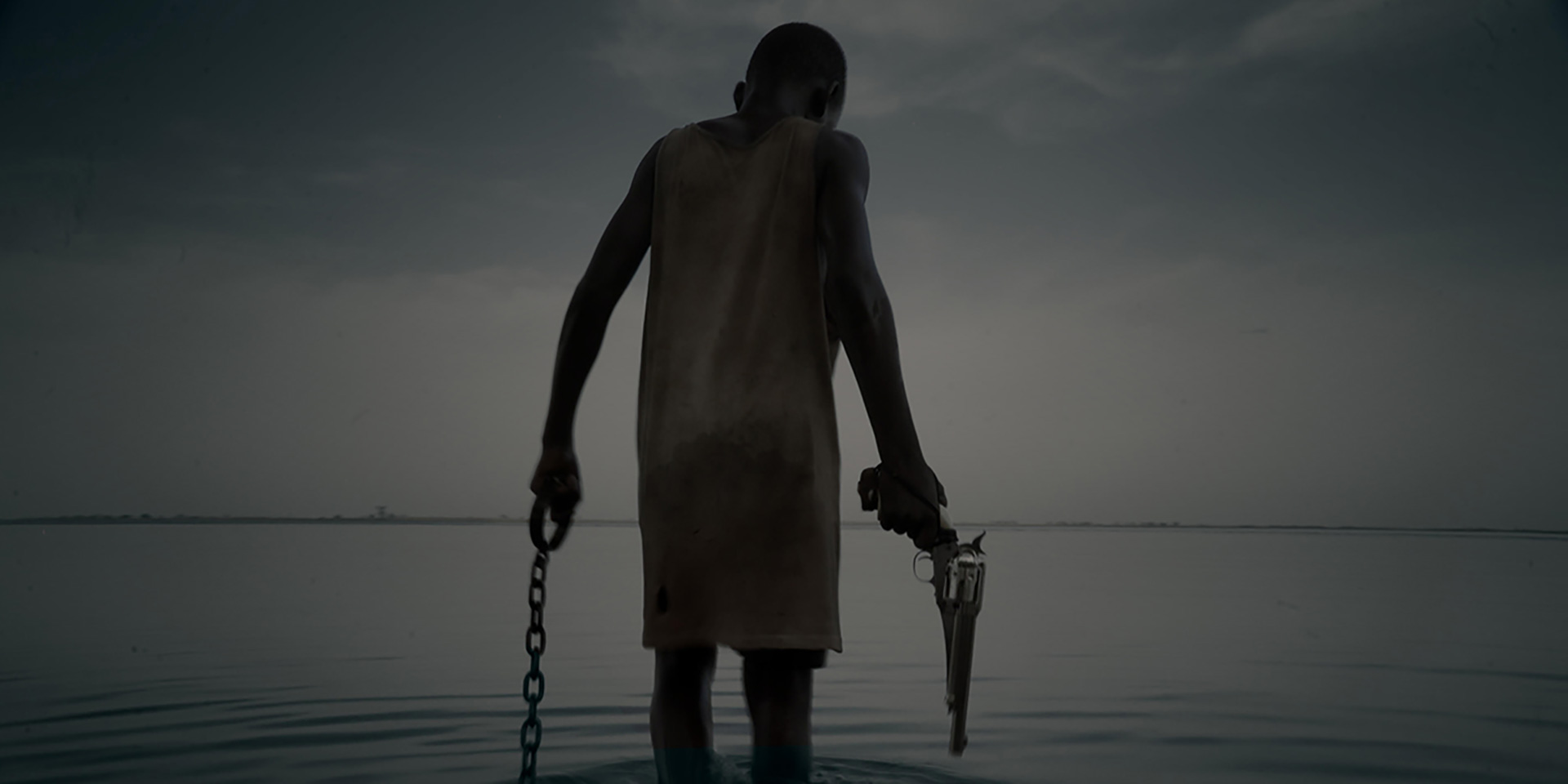 The infamous “Hyenas”—three mercenaries running amok throughout Africa—are caught in the air with gold bars, the drug lord (Renaud Farah’s Felix) they’ve been hired to extract, and a failed fuel tank leaving them with bad and worse options for an emergency landing. The Guinea-Bissau authorities won’t let them leave without a fight on the ground and they’ve surely alerted their Senegalese counterparts already, but Chaka (Yann Gael) knows of a secret beach from his past where they might be able to lay low and find the materials to repair their plane’s damage. Rafa (Roger Sallah), the muscle to Chaka’s brains, doesn’t like the idea while Minuit’s (Mentor Ba) mysticism has him believing their leader is hiding come crucial details, but they follow him just the same.

Where they ultimately arrive looks like any seaside waystation despite these lingering notions that it might very well be the jaws of Hell. Saloum almost reveals itself as a resort with its steward Omar’s (Bruno Henry) smile either alleviating trepidation or inspiring more. The way things work is that you can stay and eat for free as long as you’re willing to partake in the next day’s chores. Those tasks are anything from planting mangrove to scaring off poachers—whatever keeps the delicate ecosystem in balance. Chaka tells his partners to let him do the talking, keep their heads down, and simply relax for a couple days. The latter proves difficult, though, when another guest (Evelyne Ily Juhen’s deaf mute Awa) reveals that she knows who they are.

She isn’t the last surprise writer/director Jean Luc Herbulot throws at his trio, but she is perhaps the one that may help them. Since they are the only ones present who know sign language, they can keep her engaged without the rest finding out. This is crucial since a late arrival introduces himself as a police captain (Ndiaga Mbow’s Souleymane). Does he also know what happened in Guinea-Bissau? Fake names or not, any cop who sees these three men with a Mexican by their side is going to be suspicious. At least Awa thinks of them as heroes despite what the news has said. She knows they’ve helped liberate people and wants to join their ranks if they let her. A lot must happen first, though.

I don’t want to give too much away, but the visions of a young boy in chains escaping his prison that haunt Chaka are the least of his worries once Herbulot shifts genres from tense, character-driven thriller to supernatural survival horror. It’s an abrupt change that works quite well because of how its entrance at the start of the second half builds off the conclusion of the first. One mystery is solved so another can begin without missing a beat as revenge takes on new meaning in the aftermath of its completion. Themes of colonialism, child soldiers, and child abuse arise to expose some of the motivations that drive a man like Chaka to do what he does: death in service of life. Money is merely a perk.

The bursts of action are effective and the special effects (locust-like swarms of demonic impulse surrounding their hosts, the whispers conjured from the pairing inflicting death from the inside out on anyone who dares listen) are nicely rendered in the periphery as the camera mostly stays with the cast sneaking around to hopefully fulfill Chaka’s escape plan. A foreboding atmosphere lingers throughout regardless as truths are revealed and the cause for long-held curses are brought to light. As the opening voiceover explains, however, revenge as a metaphorical river only reaches its end through drowning. So even if evil is defeated to quiet the nightmares of so many lost souls, the price paid will remain steep. And gold only goes so far before blood inevitably takes its place.

Herbulot has a definite flair for suspense and entertainment (Saloum isn’t afraid to find humor before the darkness sets in) while compiling a fantastic cast that understands its task. This story would have been equally as successful if it stayed with its quasi-murder mystery dinner scheme simply because the rapport of these duplicitous characters was captivating enough to sustain our interest. The glances Rafa and Minuit share in fear of what Chaka got them into add anxiety. Chaka’s penchant for perhaps pushing too far with his positive attitude attempting to earn his host’s trust brings hubris. And Omar can’t be the easygoing purveyor of charity he seems, right? Add a nearby town of silent wrestlers with an air of uncertainty and demonic spirits ultimately fit in perfect.

Because of the secrets being harbored, however, Gael must set himself apart emotionally and physically in the aftermath. His Chaka is exorcising his own demons beyond those suddenly seeking to pick them off one by one and his bond with his brothers is too strong to ignore in that pursuit. They may be criminals and killers, but it’s the title of emancipator that they wear with the most pride even if they hide it to keep their ruthless image alive. With Sallah’s butcher knife twirls and Ba’s sleeping powder by Gael’s grin’s side, they obviously look the part too for anyone unwilling to peer deeper like Awa. You can think their meeting here is coincidental (contrivances do abound where it comes to narrative convenience), but I’d rather call it fate.