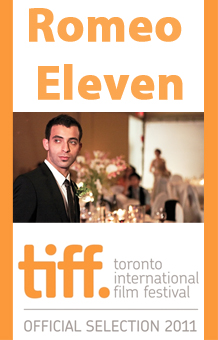 Who is Rami? Or better yet, who should Rami be? It’s the question he fears to ask himself while the people surrounding him attempt to give the answer. Should he be the accounting major at university his father pushes him to be? Should he be out trying to meet nice young girls to make his mother happy? How about the amiable brother that escorts his sister around town so she can have college life fun away from her more traditional family? Or maybe Rami is simply a physically-disabled young man without a clue as to what his next step will be.

Not wanting to be any of the above, he decides to live out a fantasy online as ‘romeo11’. Through this persona he can delete all those parts of himself that have caused such grief his entire life. By appropriating bits and pieces of the many Ramis the world wishes he could be, he fills the empty void of self with a new life and successful career. Traveling the world for business, visiting the Empire State Building, and staying at fancy hotels is whom Romeo is and whom the pretty girl on the other end of his chat box desperately wants to meet. It’s not being caught in a lie that prevents Rami from finally setting a time and place, it’s his lack of funds to keep it alive.

Rami’s fear of being himself—of knowing himself—sits at the forefront of Ivan Grbovic’s debut feature Roméo Onze [Romeo Eleven], screening at the Toronto International Film Festival. The boy sleepwalks through life, slogging through the pity and embarrassment so he can come home and talk to his virtual friend as a man without problems. Co-written by the director and Sara Mishara, the film lets us into his world to see the forces pushing upon him from inside and out. Living in Montreal, his transplanted Lebanese family has found a place within the new culture. Each member may be at a different point in his or her assimilation, but Canada is their home and they have accepted their new community. None, however, had to also overcome the disability Rami does; no one knows the pain he feels as he watches them all move on without him.

The anonymity of the Internet allows him escape. The pressures of seeing his sister Nada ready for marriage, his future brother-in-law become the perfect son he can never be, his sister Sabine (Sanda Bourenane) turn into a modern woman for a modern city, and his father work day and night at his Middle Eastern restaurant to sustain their way of life are too much. Assumed to be attending school to follow his father’s dreams, Rami instead goes to shopping malls or city streets to be surrounded by nameless faces and crowds with which he can blend in. Amidst the masses he is never singled out. Hidden by the throngs, his afflicted walk remains unseen as the bobbing of his head mixes with the rest. Outside and away from the scrutiny of everyone he knows, Rami is normal. But this façade cannot last. At some point the truth will come out, whether to his family or the young girl enjoying their budding computer-based relationship. So he must raise the stakes and find a way to become Romeo to once and for all leave his broken self behind. He tries to open a loan, get a credit card, and appear to be the man he has concoted. Using the suit bought for his sister’s wedding, he rents out an expensive hotel room and plans to finally meet the girl that could change his life—someone who likes him now and might not run away seeing his crippled hobble moving towards her. It’s his opportunity to alter his life and switch personas, but the one thing he hadn’t planned for was Rami’s strength. No matter how cool or successful Romeo might be, that voice of caution and fear from the real person buried inside will not disappear.

With his first acting role, Ali Ammar embodies the suffering and depression weighing Rami down. It’s a powerful performance that I’m sure was inferred upon by his own years of coping. So many scenes are devoid of speech, the subtle score soothing us as we watch him look upon the world with his sad, hopeful eyes. We catch glimpses of the person he could be: singing and grooving to his music while stocking the backroom shelves of his father’s restaurant and driving his sister’s car around the city let him be like any other kid finding himself and enjoying life. But then his father, Ziad (Joseph Bou Nassar), shuts off the music or his sister spends extra time at her party telling Rami to stay and have fun when all he wants is to go home. His family tries to shove him into a hole of conformity without taking the time to realize—or maybe not wanting to accept—the fact he is anything but.

The ebbs and flows of Roméo Onze keep us involved to the very end through some gorgeously shot sequences and stirring portrayals of authentic familial squabbling. Some impressive sights include Sabine’s fractured face through a segmented glass hospital window and the opening static shot of a subway pole with the coming and going of grasping hands as Rami makes his way through Montreal. Both also serve as quiet moments of introspection depicting his lost soul, tired of being told what to be. All he’s ever wanted was the love and acceptance of his family to become what he wants. Watching their faces light up when Rami talks of his date says more about their personal desire for normalcy than any happiness for their boy. Until that thought process changes, they can never be more than passing ships docked at a common port because Rami’s pain is too strong and far too old to be disregarded. As for Romeo, ‘he’ can never be a permanent solution, but maybe finding that out is the only way to discover what is.

Habibi plays at the Toronto International Film Festival on September 14 & 16.