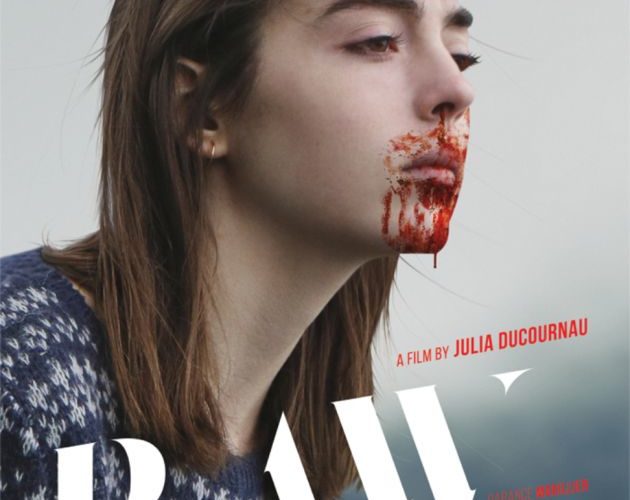 18-year-old Justine (Garance Marillier) is a meek vegetarian, which motivates her decision to enroll as a freshman at the same prestigious veterinary school as her older sister, Alexia (Ella Rumpf). Existing far from reality, this university houses authority figures that, outside a teacher who has it out for her, are all obnoxious, bullying young people, their hazing rituals emphasized to comedic effect. This frosh-week mentality essentially makes Justine the subject of a reverse-slut-shaming from her peers, where she’s made to feel bad for being a virgin. An ostentatiously directed party scene early in the film portrays the school as almost one big orgy she’s frankly just not invited to.

An awakening of a different kind takes place, the sight of blood surrounding Justine on a frequent basis drawing out a vampiric cannibal condition similar to the diseased ones from New French Extremity highpoint Trouble Every Day. It repeatedly borrows the iconic image from that film (or if it’s better to your liking, the album covers for rocker Andrew W.K.): blood smeared down a face. The first victim is her domineering sister, who gets her finger eaten after attempting to sexy up Justine with an ill-fated wax job to her private parts. A transformation from the geek to the carnivore is inevitable, but there’s the question if she’ll also get revenge on her domineering classmates — though not before her appetite inevitably turns sexual.

Of course, another coming-of-age tale, triggered by the image of sunshine glistening through the windshield of her parents’ car, presenting an aesthetic and narrative mode to be subverted through the foray into the horror genre. Yet when you boil it down, the shocks of Raw — or, rather, Justine’s various humiliations — belong more to a dire Todd Solondz cringe comedy, even if there are aspirations to Carrie. (A chaste girl gets animal blood dumped on her in slow-motion, after all.) It’s a metaphor too obvious to ever really take flight, despite how much effort is visibly onscreen to put us within Justine’s subjectivity: clipped scenes that gradually put the film in an oneiric-like state, typically involving larger animals (e.g. cows or horses). On the other hand, the episodic structure makes the film feel far longer than 95 minutes — the inevitable feeling of a work that’s more a collection of art-horror tics than a cohesive idea, yet never “messy” enough to compel spinning out of control.

Perhaps due to the coincidence that the opening pulls a leap-forward in time, then smash-cuts to title card trick that recalls the far better Don’t Breathe, one is instantly aware of its demo-reel tricks: an almost perfectly calibrated mix of hip affectations, frequently politically incorrect yet seemingly “feminist” (in short, perfect think-piece fodder) subject matter, or classic horror quotations (don’t forget the occasional Goblin-sounding music cue). Not managing to be as icky as it wants to be, Raw makes one long for the days of exploitation films that compensate for the lack of technical craft with pure, idiotic chutzpah.

Raw premiered at the Toronto International Film Festival and will be released on March 10.