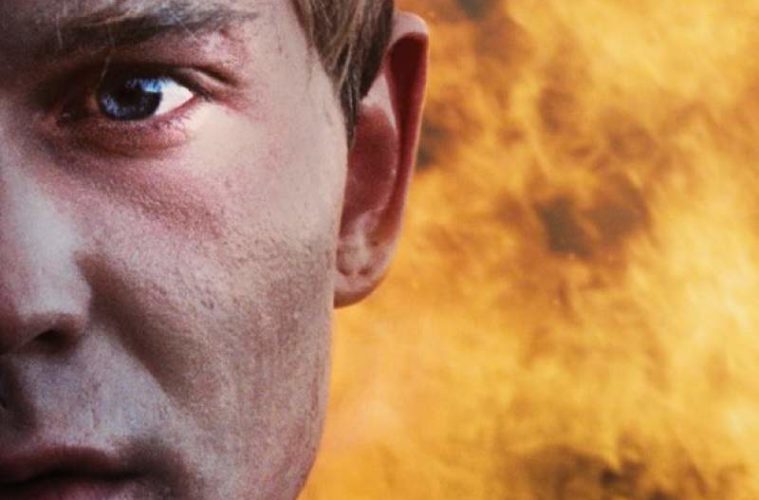 Going in with no expectations besides the recent news that the film had been shortlisted for Norway’s 2017 Oscar selection, director Erik Skjoldbjærg‘s Pyromaniac could not have delivered a better start. With extended camera movements capturing subtle detail from a car driving to an older woman’s look of panic inside the house as she searches for her husband with ominous words, “He’s here,” I was enraptured. Glass breaks and fire bursts out from door to hallway to living room at an extremely fast pace. The homeowners do escape, but she decides to go back for a photo book, only to discover her way out blocked. It’s a chilling scene: fire everywhere, hope erased.

Unfortunately, the film never really matches this level of intensity once it travels back in time three weeks to show nineteen-year old Dag (Trond Nilssen) playing with matches in the forest. We’re suddenly at his house, the phone ringing to signal a fire has broken out. Dag and his father, Ingemann (Per Frisch), hurry out the door to the garage to release the town’s fire truck — the latter revealing himself as fire chief. They race to the inferno, set up the pump, and douse the flames with water. It appears so routine, and yet Ingemann remarks how long it has been since the equipment was used. Well, it’s about to be work overtime now. The fires don’t seem to ever want to stop and arson is investigated.

Based on the prizewinning novel Before I Burn by Norwegian author Gaute Heivoll, Bjorn Olaf Johannessen’s script seeks to enter the mind of a sociopath wielding fire for his personal gain. I say that as a means to satisfy his pyromania, but also to bolster his standing as a bona fide fireman worthy of inheriting the mantle of fire chief from his aging father. We know it’s Dag that’s sparking the embers and we see his disillusionment with the town and kids his age who have always looked at him as weird. He’s known as the boy with straight-As who completed his military service and never applied his intelligence in a vocation worthy of its excellence upon return. He’s tired of being thought of as a failure.

The problem is that we understand this very early on — so early that the subsequent fires become quite redundant in the fact that no one gets hurt. Dag is smart enough to keep the police chief spinning his wheels, targeting empty homes and buildings to quiet his craving. By the time his psychology devolves to more dangerous levels, we’ve already been inundated with the act itself as our frustration increases towards what the endgame will ultimately prove. Ingemann’s health begins to fade, Dag’s alienation grows, and the teen becomes more brash and, therefore, more prone to mistakes. Eventually, we stop caring about Dag completely because the way his mother, Alma (Liv Bernhoft Osa), suspects and father knows makes their inaction infinitely more intriguing.

This becomes the profound revelation at Pyromaniac’s core. Rather than see where Dag will take us, we crave to discover if anyone is willing to accept he’s the culprit. Sure he’s strange. Sure he’s over-zealous. But he’s out there risking his life to save people, not kill them. Maybe the truth will somehow go a different direction. Maybe we’ve been led to believe Dag is a monster only to hide what’s actually going on. I wish it were this complex because Skjoldbjærg has crafted a beautiful film with wonderful performances and gorgeous cinematography. We begin to understand the town’s mentality and the cloud of delusion we build for ourselves to become blind to what’s right in front of our face.

No amount of visual beauty can mask the plot’s tedium, though. The quiet pacing enhances a feeling of dread until we realize the stakes aren’t as high as the opening promised. Dag’s fleeting glimpses of inclusion are crucial to getting inside his head, but we’ve grown tired by the third time watching his fantasy of being “one of the guys” blow up in his face. It’s as though the boy is a fire, suffocating the audience by stealing our oxygen until the arrival of a climax with very little fanfare. I’d even call it anticlimactic because the denouement following Mr. and Mrs. Ingemann around in the aftermath earns more attention — the devastation of a parent more emotionally charged than the actions of a sociopath.

It’s very well-made and a showcase for the Insomnia director’s immense talents. I’d say it’s a fascinating character study by Nilssen too, his internalized emotions perfectly suited to this sympathetic outcast. The shots of fire consuming everything in its path are awe-inspiring, the majesty of its wrath turning us into pyros as well. I almost felt disappointed when some of the later blazes ignored the setting to merely show the ash piles at completion. The fact there were enough to make this evolution of displaying the carnage only proves the redundancy of the act. I knew everything about Dag by the mid-way point, the filmmakers seemingly uncertain I would. It’s so minimalistic that it somehow becomes too excessive to be great.