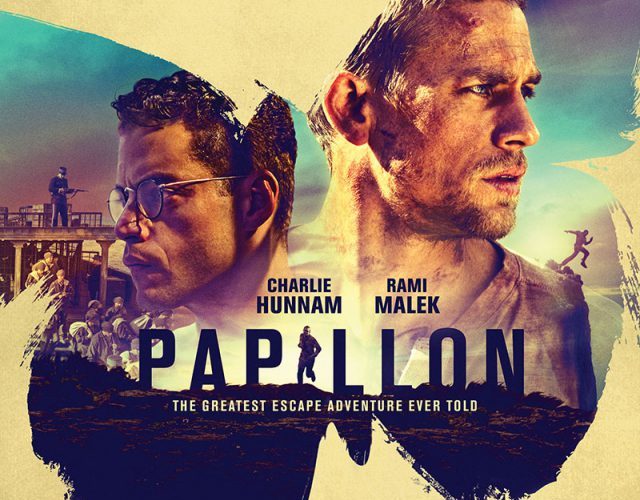 TIFF Review: ‘Papillon’ is the Rare Remake that Improves Upon the Original

It’s amazing how some tweaking can turn a decent film showing its age into a worthwhile project that earns its upgrade four decades later. To watch Franklin J. Schaffner’s original Papillon adaptation is to see an arduous series of harrowing ordeals strung together for no reason other than the thrill of adventure. It introduces the titular tough guy safecracker Henri “Papillon” Charrière and scrawny forger Louis Dega as two men caught in a horrible place with little hope. They team-up in order to use each other: brawn and money respectively. But as the film continues on, that dynamic never changes. It’s hinted that a friendship forms, but the two never pretend anything they do for the other is selfless. The result is a hollow depiction of inspired by true events machismo.

Director Michael Noer and screenwriter Aaron Guzikowski have a different take on Charrière’s memoirs (a label still debated as far as how much of what he wrote happened to him specifically or is true at all). As the former explained before the world premiere of his remake, they’ve created something akin to a love story. While Papillon (Charlie Hunnam) and Dega’s (Rami Malek) partnership may start from utility, it legitimately blossoms into platonic love. Inseparable by necessity, they eventually find themselves truly invested in the other’s well being to the detriment of their own. So while their escape attempts from the penal colony of French Guiana and the years of solitary confinement won through them are nearly identical, there are stakes this time around. Since they care, we care too.

It seems like such a small alteration and yet it speaks volumes for Noer and Guzikowski as storytellers. They change who says certain lines, shift motivations, and oftentimes streamline ordeals that came across as overly convoluted in the original. Those endeavors that took multiple starts and stops to either succeed or fail in Schaffner’s version have all the bloat cut out so the emotion (elation or sorrow) can shine above this notion of “heroics.” This is the difference between a 1970s Hollywood vehicle starring Steve McQueen as a badass adonis and a 2017 cinematic landscape able to embrace nuance and compassion despite the testosterone flowing onscreen with a virtually all-male cast. Empathy without a gruff “I would kill you myself” is no longer taboo. It’s a sign of strength.

It helps too that Noer goes back further in order for us to meet Papillon as more than a cornered animal fighting for survival. We head to Paris and watch the circumstances surrounding the frame job murder that got him sent to prison in the first place. We’re able to like him as a criminal with a soul, a man looking to begin a life with his lover (Eve Hewson) after one more big score. Taking him at his word in the original was a large ask that eventually faded away when his past lazily became irrelevant. Here it never does. He has something to live for: his innocence and revenge. If he’s caught escaping and thusly thrown in solitary confinement for two years by the warden (Yorick van Wageningen), so be it. He’ll spend that time planning because life has become nothing but attempts at freedom now.

Another improvement made is in the characterizations of those on the periphery. Rather than draw everyone as a two-dimensional stereotype, Guzikowski has added complexity. This goes for Dega too with Malek playing him as a man possessed by more fear and unlikely courage than Dustin Hoffman’s portrayal ever could beyond his role as the unfortunate necessity weighing Papillon down. But there are also strides taken with one of Henri’s early cohorts Julot (Michael Socha) thanks to a shift in motivation and a show of tenacity; the conflicted ally until he isn’t Celier (Roland Møller) standing in for the too congenial Clusiot from the 1973 movie; and the unfortunate Maturette (Joel Basman). They may still be pawns, but we feel like we know them as real people just the same. Nothing they do is ever done lightly.

As such nothing Papillon does is without intent either. He’s not a killer and acts accordingly despite being willing to do what’s necessary for himself and his friends. Hunnam lends a welcome tinge of wry sarcastic humor to the performance—as he’s known to do—that endears him to us so he can be seen as more than a cliché. The filmmakers don’t linger on his displays of “selflessness” either because he is being selfless this time around. At a certain point it’s not about protecting his meal ticket as much as protecting his friend. They ensure we know that Dega’s cash supply isn’t bottomless so Papillon has no choice but to align himself to the forger with legitimate compassion. Whenever the two are separated for long stretches, their reunions arrive with genuine joy.

The rest can still seem like a steady stream of escalating tragedies (life sentences of exile can make men do crazy things), but none are drawn out to enhance how contrived they are. There are less bait and switches to frustrate viewers and more intelligence on behalf of the characters as far as knowing their limits and when something is too good to be true. Noer isn’t interested in the pulpy, wannabe mythic journey of Papillon when there’s a meatier through-line highlighting our humanity in dire straits. Rather than make his film about how far our bodies can go, he seeks to portray the lengths are hearts will. The hardships and pain are therefore allowed to culminate with a sense of purpose and hope. It’s not what these prisoners endure, but how they refuse to lose themselves in the process.

Papillon premiered at the Toronto International Film Festival and opens on August 24.