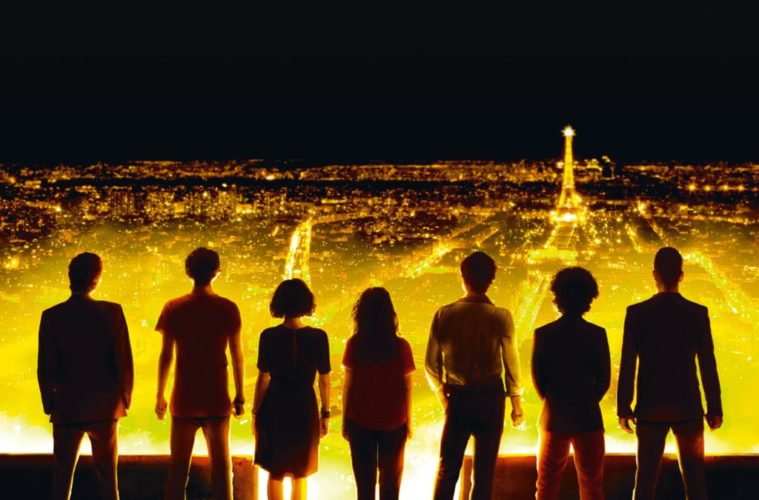 Here’s an elevator pitch: Nocturama is Robert Bresson’s The Devil, Probably in a homegrown-terrorist garb that substitutes transcendental style for the form of contemporary thrillers and music videos, all the while filtering a faux-intellectual’s anger through a consumer-culture criticism that, in its place and mood, most recalls George A. Romero’s Dawn of the Dead. This almost sounds like an easy sell, notwithstanding the fact that this elevator ride would need to take us to a building’s higher floors. But for plumbing the depths of radicalized Parisian teens’ desires and actions less than a year after ISIL-led attacks shocked the globe, every ounce of appeal that his film might — and, I think, ultimately does — offer can’t prevent writer-director Bertrand Bonello from being a victim of poor timing. Timing is so relative, though; doubly so when his is a picture that grows (some might go the cancerous route and say “metastasizes”) for days and weeks after being seen, the kind that feels at once explicitly of its moment and vaguely outside of any temporal trappings.

Those who enter Nocturama lacking knowledge of its set-up will quickly grasp that something very troubling has been set in motion. It begins as young men and women — some actors are so obviously juvenile that the fictional sheen does nothing to stifle a queasy feeling — stalk Paris. Here, as through the remaining film, Bonello’s camera anticipates as much as it telegraphs: ominous glares, opaque gestures, and stiff strides from the involved that carry on, sans context or dialogue, for a remarkably long stretch — perhaps to the point that non-Parisian viewers may feel like an outsider, or at least wish we could just move on.

It’s only with the reveal that they plan to detonate semtex across Paris that Bonello settles down a bit, providing context-heavy flashbacks of their preparations while eliding much of any motivation as to why they’re making an effort. The targeting of corporation-like environments should be key, but I can’t claim to have seen a movie eager to stress this direction. (HSBC, the Ministry of the Interior, and a Joan of Arc statue are all destroyed, sure, but no one I’ve spoken to dwells on this fact too greatly.) Nocturama‘s narrative turns and structure do more to suggest inevitability than motivation. Yes, they will retreat to a place that dulls their senses and appeals to their basest consumer impulses. Yes, the stupidity of one (or two [or all]) will cause the bottom to fall out. No, they will not get away with what they have done. Flaws in their plan crop up or clarify. A swift and absolutely unforgiving conclusion awaits.

Somewhat perversely, Nocturama holds off and turns even more relaxed when the team take refuge in a shopping mall. (“Turns even more relaxed” comes with a price, however. Tableaux shots of customers milling about, oblivious to events happening outside — and thus becoming customers to whose fate we remain oblivious — may be the greatest source of tension. Bonello doesn’t ever forget that a lack of understanding is the best means for letting us sweat a bit.) It’s here where the mood shifts from Bresson to Romero — not the horror master’s high-concept monsters, but his slow, depressing stretches about isolation and realizing life may very well be at its end. Bonello’s filmography is obsessed with both aesthetic dressings and their psychological impact, and so he’s rather at home in a contemporary shopping mall. The picture’s scope can be felt expanding as the confines ostensibly shrink it: from here, it’s surfaces — screens, toys, mannequins, brand logos — and a bizarrely affectionate engagement with them. He is not a surface-level artist, but one so obsessed, so infatuated, with surfaces that it becomes hard to tell where the line between presentation and consideration can even be made.

Although Nocturama is a bit more sterile than Bonello’s prior works, it achieves sublimity through immediacy rather than consideration. That’s not to say it doesn’t invite the latter — the film might benefit most from hindsight and mental percolation — but when the writer-director in command is both a master of the needle drop and an accomplished composer, one can easily lose themselves within the mood established by his dull synth tones, become temporarily overwhelmed (and, for better and for worse, giddy) as a result of the rapid-fire, fire-soaked, screen-heavy montage set to, God help us, Willow Smith’s “Whip My Hair” — a turning point — or not immediately realize how sad and desperate a dance to Blondie’s “Call Me” plays in light of what these people have done and what fate almost certainly awaits them. (There’s another musical sequence I wouldn’t dare reveal any piece of. You’ll know when it appears.)

It’s never a question if those viewing a film about terrorism will eventually take some moral position, but a matter of whether they’ll do so by choice or because the movie has forced them into a corner. The relative opaqueness of their attack is compounded by what Bonello has elected to stress: even with their (ostensibly) grand ambition, they don’t wish for others to be injured or killed, and those who suffer at their hands must be accepted as necessary sacrifices for…

Well, I don’t know, but it’s at least clear that Bonello — who has almost exclusively focused on outsiders or, at the very least, people who disappear very deeply inside themselves — has an affection for these radical youngsters just as he makes strides to illustrate the depths of their naïveté and, at critical junctures, death wishes. And whether I’ve covered everything interesting Bonello’s done here or only scratched the surface — e.g. a repetition-heavy emphasis on critical moments: something I can only qualify in terms of emphasizing connectivity, despite how much I liked this effect — remains unclear roughly 1,000 words into this review and eleven days since seeing the movie. As much as I admire Nocturama (answer: an awful lot), locating exact points of admiration proves difficult when its pleasures are so purposefully alienating and bitter. But there are times and places where that’s precisely the right thing; I’m grateful for an opportunity to indulge.

Nocturama is played at the Toronto International Film Festival and opens on August 11.