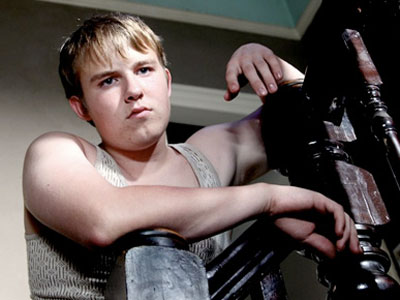 NEDS, an acronym for Non-Educated Delinquents is writer/director Peter Mullan’s follow up to his controversial 2003 film The Magdalene Sisters. Set in working class Glasgow amongst youth street gangs, the film occupies the same territory as the contemporary Harry Brown: both are warnings. Institutionalized housing, not so much broken families produce violent youth attempting to fit in.

Mullan uses found actors for the youth roles including Conor McCarron who brilliantly plays the lead, John McGill. McCarron isn’t even listed on IMDB. John fights to move ahead in school, disadvantage from the start he is shoved into a class below his level and through hard work moves ahead. It is this same work ethic that produces the monster that will come in the film’s second act.

John’s brother, famed for a permanent expulsion from school for assaulting teachers allows him to develop a street credibility amongst kids in the neighborhood – the system produces Neds, and when they hope to move ahead the system and society slows that process.

Mullan has tread this ground before with his feature I Went Down, but here he sends a warning, similar to A Clockwork Orange, set in a truly real setting. There is something worth telling in these stories as the genre of youth street gang picture has been produced in the UK, and done exceptionally well each time by such world class filmmakers as Shane Meadows (This is England) and Ken Loach (Sweet Sixteen). Each provides their own spin, in the case of Meadows it was autobiography, Loach is a master at telling stories about the working class.

Mullan’s eye for texture, particularly in domestic scenes leads us down dark paths: in the hands of a lesser filmmaker these moments would evolve into melodrama. Brave and unflinching, NEDS becomes less a character study despite providing us with well drawn characters, and more of an anthropological study of a broken system, evident especially in the film’s closing scene.