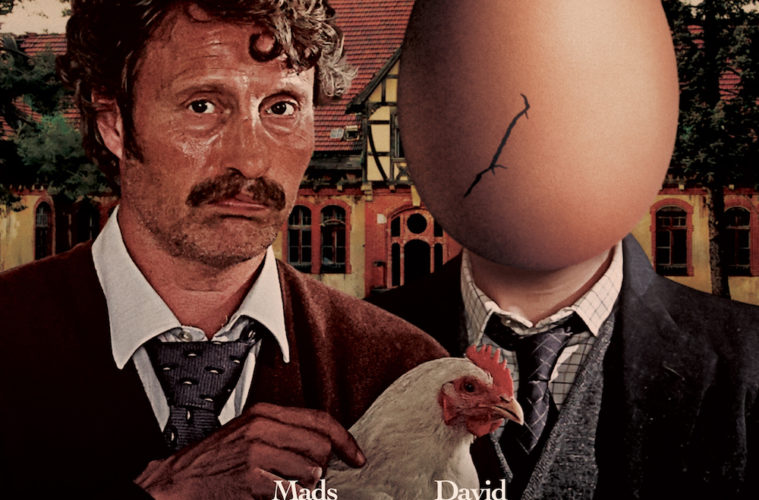 While I’m not familiar with Anders Thomas Jensen‘s solo work, I am with the films he has collaborated on opposite Susanne Bier. So to see images of his latest Men & Chicken with a weirdly disfigured and hair lipped Mads Mikkelsen readying for a badminton strike was to be unprepared for the dark comedy of pratfalls a la Klovn it provides. A perverse genetic-minded fairy tale about family—warts and more warts—its leading duo consists of one brother who must regularly masturbate (Mikkelsen’s Elias) and another possessing a visceral dry heave tick (David Dencik‘s Gabriel). They show us that ugly ducklings can sometimes simply prove ugly. And unnecessarily aggressive in dysfunctional loyalty. And as inexplicably smart or unsocialized as the sky is blue.

We meet the brothers at their eccentric worst. Gabriel is the responsible, gainfully employed one who has tried to make himself “normal” through plastic surgery. He’s at his father’s bedside to say goodbye, even if a puking fit makes him miss that last breath. Elias, on-the-other-hand, is seen in his natural, lecherous habitat on a date with a psychologist to receive free counseling over a meal. He’s been forcefully estranged from Gabriel due to his penchant for constantly ruining his life, so the call about their father is a bittersweet reunion. Their finding out via VHS confession that the dead man wasn’t actually their biological dad sparks an adventure to Ork Island for more than they could ever expect.

If Elias’ childlike innocence and complete lack of filter—don’t interrupt him either or he may fly off the handle—isn’t odd enough when juxtaposed against Gabriel’s man alone, can’t be bothered by the nonsense attitude, just wait until we meet their half brothers. All deformed and equally violent for no reason other than fear of the unknown, Franz (Søren Malling), Josef (Nicolas Bro), and Gregor (Nikolaj Lie Kaas) are less than inviting once heavy pots and stuffed birds start getting smashed down on their guests’ heads. Gabriel becomes relegated to a wheelchair, the doctor of this 41 person-strong town tries to avoid the sanitarium housing them, and meeting dear old dad has been forbidden.

Craziness ensues as Gabriel desperately attempts to find answers while Franz blocks him at every turn. The former’s sense of order looks to help them assimilate into mature society—the mayor should have banished them years ago but hasn’t because Ork would be stricken from the map if their population dips below forty)—but it’s only to gain trust. All progress is thrown out the window when Gabriel walks into forbidden rooms with Gregor’s help, relegating him to the archaic caged prison at the front of the house while chicken hybrids roam free. Cheese is everywhere, sibling competition is fierce and bedtime arrives with instruction manual stories.

Beyond the nonsensical humor and physical pounding taken for laughs, however, is a surprisingly heartfelt parable about love. That’s not to say everyone save Gabriel isn’t a chauvinist would-be rapist if left unchecked to follow the worst-of-them’s lead, but they do ultimately want to find girlfriends and trust in their brothers. Tempers and deceit do them little favor, though, until half of the truth is revealed. This gives Gabriel more control so order can increase, but it only takes one moment of emotion to undo every bit of progress. The clan is paradoxical as a result: loyal to each other against outside forces and their own worst enemies within.

Men & Chicken‘s appeal comes in the characterizations once the mystery of their conception is all but assured to be what your worst nightmares often conjure with horror as opposed to humor here. It becomes a game to see how far they’re self-destruction will go and which side they’ll chose: Gabriel’s quest for evolution or Franz’s for status quo. You will shake your head a lot throughout their fringe adventures, but there’s a quality of helplessness to empathize with them that Klovn doesn’t  possess. Jensen takes that formula and makes it more than simply lark.

Dencik is the rock and our entry point as the sympathetic hero seeking answer rather than being complacent and indifferent to heritage. He refuses to be psychologically and physically grouped with the rest. That said, it’s Mikkelsen who steals the show playing so far against type that you wonder how it could be him. There is no grace to his Elias—a consummate follower who latches onto whichever alpha is prevailing at the moment. His uncouth reasoning skills are delightfully absurd as he becomes the poster child for what their father did to them. Equally repellant as he is fascinating, the movie exists in his image: a singular creature that must be seen to be believed.

Men & Chicken is screened at TIFF and will be released on April 22nd by Drafthouse Films.