TIFF Review: Maya and the Wave Examines the Fight for Equality in a Male-Dominated Sport 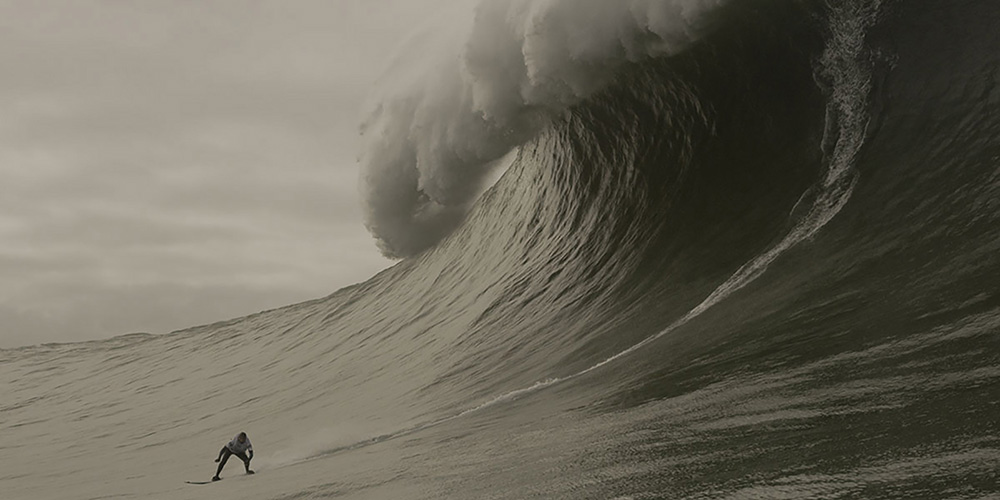 At twenty-six years of age, Brazilian Maya Gabeira was at the top of her sport. A world champion. Winner of countless awards. On covers of magazines. And repped by Red Bull. Looking to progress her career from becoming a pioneer for women in the big wave surfing game to holding a World Record that stood next to the men in control of the sport, she and mentor Carlos Burle traveled to Nazaré, Portugal to accomplish the unthinkable. Everything came apart instead. Not only did she wipe out and almost die after two failed attempts at recovery left her unconscious and floating in the water, but Maya was ruthlessly dismissed by everyone in the industry as inexperienced, reckless, and a destructive force for surfing itself. She was all but abandoned.

What begins like a feel-good tale of one woman’s quest to be the best, Stephanie Johnes’ Maya and the Wave quickly transforms into something much bigger. More than simply attempting to rejuvenate her career after three back surgeries, anxiety disorders caused by the trauma of the accident and its public backlash, and a loss of sponsorship, Maya’s journey became a fight for equality. Because what’s the press say when a man like Laird Hamilton or Garrett McNamara wipes out? As described during the film, they are hailed as heroes. Fearless giants who took a beating to do the impossible. Why the double-standard then? Why were Maya’s completely normal and relatable growing pains in a brutally dangerous sport cause for saying it was impossible? The answer: unchecked chauvinist ego.

Being a woman in a male-dominated sport means being second-guessed, belittled, and sabotaged so none of them must feel “less than” by getting beat by their “inferior.” And the men Johnes interviews—men on Maya’s side—might be the best examples of such behavior with their backhanded compliments and language. Burle is a hero to Maya and trained her to be the best she could be. We know this because McNamara remembers being shocked the Maya he saw the day of her accident was the same Maya he rejected years prior as having no business being in the water amongst “professionals.” Even so, Burle admits she had the “tits and ass” to stand out. And that hitting a wave after putting her in an ambulance was perfectly fine.

So, while Red Bull followed suit by helping her stage a premature “comeback” to recuperate the money they spent on her during her recovery, Johnes got the real footage of Maya’s struggle to cope. Because while the sport and its financial backers only cared about results, Johnes saw the reality that this young woman who had everything one day only to be forgotten the next needed more than coercive guilt trips to potentially injure herself worse. And that’s not to say Maya wasn’t her own worst enemy at times when rushing back, pushing too hard, and refusing to take a year off like she was advised. To his credit, Burle is the one she says finally got her to slow down. The rest is literally history.

Surfing is the type of sport that’s perfectly conducive for cinematic documentary since surfers are constantly being filmed to ensure the best waves and runs can be shared online. So, we get to see everything: the harrowing moments like that first go at Nazaré (complete with close-ups of the botched rescue) and the awe-inspiring moments like Maya’s subsequent successes. We also get the behind-the-scenes moments of her painful rehabilitation and the fight on land to get her accomplishments recognized as they should have been in the first place. Add endearing home movies and familial context for her unwavering determination (her father is Fernando Gabeira, celebrated revolutionary and politician who wrote Four Days in September based on his experience kidnapping an American ambassador) and there’s a lot to absorb.

It’s all shown with a single goal, though: to capture Maya’s spirit, perseverance, and heroism. Because just as Burle got her excited about a sport that women weren’t supposed to pursue, she’s now inspiring young girls around the world. And not just to ride a wave whether three feet or seventy, but to also have the mental fortitude to carry that athletic conditioning out of the water and shake the system to instill real change. That’s the stuff you must take for yourself because it won’t be given to you without a battle. Maybe the stakes don’t seem quite as high as her father’s disruptive acts, but Maya’s achievements are no less important when it comes to giving hope to those tired of being told they aren’t worthy.

Maya and the Wave had its world premiere at the Toronto International Film Festival.