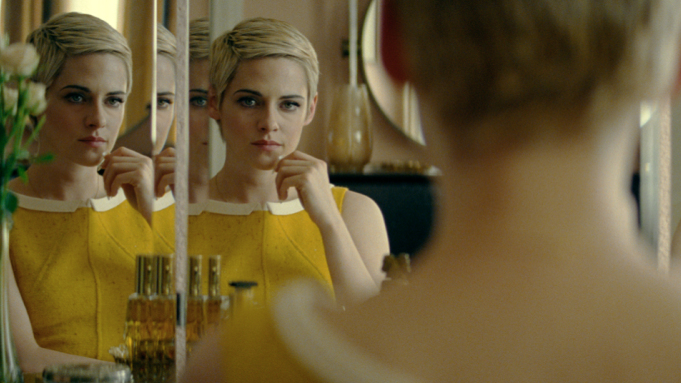 Watch Jean-Luc Godard’s Breathless—OK, watch it again—and it is impossible not to be struck by the mysterious, stunning, enigmatic Jean Seberg. Here was an actor clearly destined for icon status, a Midwesterner with a European sensibility and piercing onscreen intelligence. Offscreen, Seberg was a woman under siege by the American government, and this tumultuous period of her life—the late 1960s and early 1970s—is covered in Benedict Andrews’s fascinating, ultimately disappointing and oddly shaped Seberg. Starring the ever-splendid Kristen Stewart, a gifted actor who captures Seberg’s look and grace, the film is a watchable failure.

Plaguing it is a startling lack of context. The film opens with a rather startling yet metaphorically obvious re-creation of the burning of Joan of Arc in Otto Preminger’s Saint Joan. The audience is quickly plunged directly into Seberg’s post-Breathless, post-Saint Joan life without any greater sense of her level of stardom or place in the industry. Don’t know the details of Jean Seberg’s road to success? Too bad—you will not find many answers in Seberg. More time is spent on the racial divide in late-60s America, specifically the intersection between the FBI, the Black Panthers, and activists such as Hakim Jamal (Anthony Mackie).

This is all crucial, but Andrews and scribes Anna Waterhouse and Joe Shrapnel are in such a rush to get to the controversies in Seberg’s life that they neglect to build her character. Stewart excels, as always, in a deeply underwritten role. When she meets the passionate Jamal on a flight and becomes close to him, Stewart and Mackie shine; there is a genuine sparkle in these interactions. As she has proved in films as diverse as Personal Shopper, Still Alice, and Certain Women, there is no actor of Kristen Stewart’s generation as adept at joining emotional trauma and innate confidence.

What a shame, then, that so much of Seberg is spent with the unceasingly dull FBI. Jack O’Connell plays Agent Jack Solomon, a young, sound expert assigned to monitor the activities of individuals like Jamal. The appearance of Seberg startles him, but soon he and his partner (an oddly cast Vince Vaughn) spend as much time on Seberg’s comings and goings as Jamal’s. As she and Jamal become closer, the FBI interest becomes stronger, and soon the agency is tapping her phones, leaking false stories, and releasing horrific cartoons designed to humiliate and destroy.

Andrews is clearly fascinated by the intricacies of surveillance and the mechanics of recording being turned against a Hollywood star. This is a major miscalculation. It is simply not that interesting to watch the FBI watching Seberg. Nor is the home life of said FBI agents compelling, despite the best efforts of O’Connell and Margaret Qualley (who plays his wife). Much more compelling is the relationship between Mackie and Zazie Beetz, who plays Jamal’s spouse. But this relationship fades into the background once news of Seberg’s affair is released. Seberg’s own marriage to novelist Romain Gary (nicely embodied by Yvan Attal) is reasonably well-handled. He is portrayed in rather saintly fashion, however, making it easier to pull for Gary than Seberg herself. Focus is the real issue here—too much of the film’s perspective feels wrong-headed. It needed more of Jean Seberg’s interior life, and less of the noise all around her.

Seberg is the second film directed by Benedict Andrews, whose debut, Una, was one of the most provocative and searing dramas of recent years. The veteran stage director takes his actors into strange new territory with each film—see the performances of Rooney Mara and Ben Mendelsohn in the aforementioned, or Stewart and Mackie here. But acting cannot save a dire script. Una had David Harrower’s play, Blackbird, as source material. Waterhouse and Shrapnel’s script here is a letdown. When the film ends, Jean Seberg is as much of an enigma to the audience as she was at its start, and we know the drab FBI agents better than we know the titular character.

That’s a shame, because it means some of Seberg’s notable accomplishments—an emotionally wounded Stewart, a strong but troubled Mackie, Rachel Morrison’s cinematography—are forgotten as the credits roll. Seberg never quite makes the case for its own existence, nor does it demonstrate to the audience why its protagonist’s political beliefs were so revolutionary. A major Hollywood actress of the 1960s speaking out against the ugly truths of American society? That’s compelling. Seberg, sadly, is simply not compelling enough.

Seberg screened at the Toronto International Film Festival and opens on February 21, 2020.