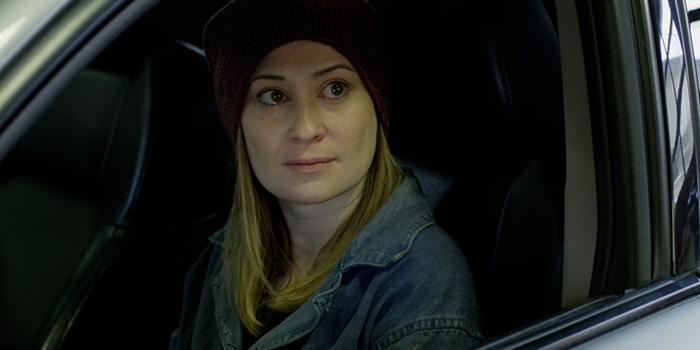 Love and suicide. Those are the words director Bruce Sweeney says inspired him to write Kingsway and are very much at the forefront of his dramedy about the dysfunctional Horvat family. And both are treated with humor despite never in a way that belittles their respective import. It’s not about laughing at suicide or those distraught and lost enough to contemplate the act. We smile instead because of our ability to see ourselves in the subject’s heaviness and a tumultuous aftermath that can lead towards a kneejerk self-centered desire to make it personal. That’s what love does. It’s a two-way street wherein we’re just as likely to do everything we can for someone who’s hurting as blame him/her for hurting us as though their troubles aren’t pain enough. The family member to worry about is Matt (Jeff Gladstone), a semiotics professor riddled with anxiety. Unfortunately the day he feels good enough to tell his therapist he’s cured (it’s probably not his first time) is also the day he drives by a local motel with his wife’s (Colleen Rennison’s Lori) motorcycle parked out front. Those good feelings sink away as distraught paranoia seeps in to take their place. He calls his pessimistic sister Jessica (Camille Sullivan) for advice, she puts the phone on speaker so their optimistic Mom (Gabrielle Rose’s Marion) can hear, and each falls into their usual broken record ruts of finding solutions that suit them rather than the one in need. The kicker: everyone is coming together in an hour for Marion’s birthday dinner.

This trio is keen to either baby each other or push too strongly. They find themselves channeling their anger and insecurities into behavior that often causes more conflict than less. So while Matt combats his compounding depression courtesy of a couple other revelations concerning Lori, Jessica and Marion look inward to see what they can do different about themselves. Sexual trysts abound as they each discover physical satisfaction isn’t the same as psychological stability. One can augment the other and one can force the other to happen in ways that aren’t necessarily healthy, but at the end of the day happiness needs more than routine or prideful attempts to throw a wrench into convention. We cannot rely on others to make us feel good. The onus is ours. Sweeney shifts back and forth between these four and a fifth character in Megan (Agam Darshi). She’s the receptionist at the automotive shop where Jessica works as a mechanic — and has an obvious crush on her. They each go about their business trying to find a win while also maybe trying to escape the problems the others can’t help but let spill into their lives. Despite sometimes feeling claustrophobic about the emotional issues each wears on his/her sleeve, however, none is too embarrassed to discuss their uncensored sex lives or walk in on the act with a proud expression rather than prudish revulsion. Things can get intentionally over-the-top to earn an easy laugh or two, but that crudeness doesn’t diminish the authentic drama always flowing beneath it.

Matt’s depression is the through-line. The uncertainty as to whether or not he’ll kill himself becomes the driving force for how the others react. This pressure pushes Marion to a state of helplessness. It has Jessica’s rage increasing beyond capacity and proves the motivating factor for the frustration pushing Lori away. Everyone is therefore on eggshells, working through their own problems with his tenuous wellbeing firmly cemented in the backs of their minds. Gladstone does well playing this central sad sack haunted by sharp glimpses of manufactured, premature joy that could never be sustained. He’s a child in comparison to the others and as such renders the severity of his condition that much darker when the drama can no longer be shielded beneath a playful façade. Things do get heavy and I’d argue this heaviness saves Kingsway from becoming another shallow comedy exploiting the complexities of relationships for visual punch lines. There are times when Sweeney and company may go too far with their jokes, but they never overstep their boundaries when it comes to the precarious pitfalls of internal suffering. Sometimes it too can be rendered humorous (Darshi fantastically depicts the awkwardness of innocent attraction), but mostly we’re dealing with Marion’s refusal to give up on her children and Jessica’s borderline self-destruction begging for an outlet that isn’t simply her reminding Matt about everything he is doing wrong. They’re each other’s closest friends and worst enemies. And like reality: having someone’s best interests in mind doesn’t give you carte blanche to meddle.

In that way Sweeney succeeds in making love and suicide accessible. He doesn’t shy from the pain both provide and deftly achieves a balance of tone to amplify rather than undercut intent. The performances aren’t without embellishment, but that heightened sense of existence helps communicate the stakes without repetition. Sometimes having a character lunge at another to choke them says a lot more than, “Tell me everything because he’s suicidal and it all matters.” Sweeney lets his cast be expressive so actions can literally speak louder than words. He lets emotions run hot without sacrificing how sarcasm can often be an effective tool for families rather than a weapon. Matt, Jessica, and Marion may push each other’s buttons, but they do so as only loving families can.