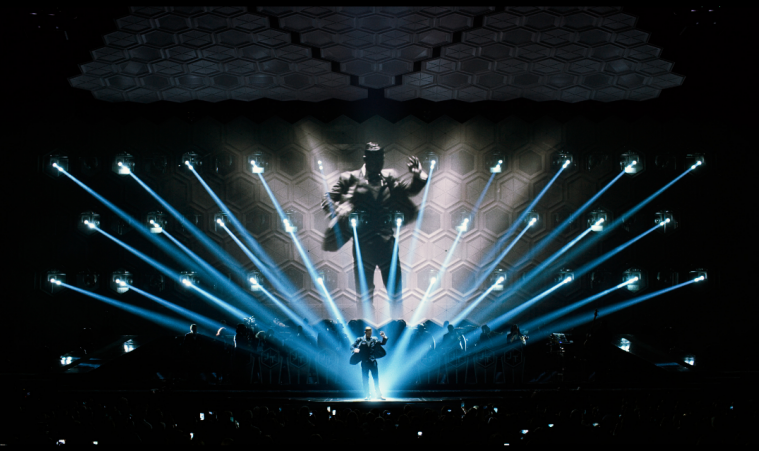 We live in a post-Popstar: Never Stop Never Stopping world, and thus we need to act accordingly. So we have to take with a grain of salt Justin Timberlake when he publicly states that he wants Jonathan Demme for his own Stop Making Sense, in part because that 1984 concert film captured not just the buoyancy of David Byrne’s gyrations, but also the other members of Talking Heads in blissful harmony. Thus, under this pretension that they’re making ostensibly the same product, “+ The Tennessee Kids” gets added to the film’s title.

Though, despite brief interviews with the members of Timberlake’s crew pre-show or the camera hovering over jittery hands moments before the performance, every cut to them in action during the show feels more perfunctory. It’s hard not to detect the film as a for-hire work from Demme, perhaps just because its subject seems so in-control — not so much in the terms of him as author, but the whole project as a form of brand management for one of the world’s biggest pop stars.

The timing may be a counter to that idea though, being that the film is debuting a year and a half after the Las Vegas show in question, the final performance in Timberlake’s two-year (!) tour supporting The 20/20 Experience (both the excellent part 1 and the somewhat of an afterthought part 2). Backed by a large band and a variety of dancers, they’re all in wardrobe provided by Tom Ford, an embodiment of the “Suit & Tie” mentality crooned about by Timberlake.

Part of Timberlake’s appeal is epitomized in this aforementioned song: The 20/20 Experience’s first and biggest single, featuring corny but charming lyrics, as well as a push-pull between old-fashioned and contemporary pop that sees him decked out in formal attire, bringing not just sexy, but classy back. What’s perhaps limited him as an on-screen performer — at least outside the realm of Saturday Night Live, where his song and dance skills are emphasized for the sake of comedy — seems a certain self-awareness to every line-reading. His naturalness on stage though shines through, including a pinch of self-loving (as with nearly every pop star) that doesn’t necessarily make him the most generous subject in the way someone like Neil Young has been in the past for Demme.

That being said, Timberlake still does what he does, and the show seems easily amongst the upper echelon of touring pop-stars, so it’s not like the experience doesn’t go down easy, even if it feels like somewhat of a missed opportunity to genuinely enter the mind of this sort of stardom. (Not that we necessarily needed raw footage of JT backstage lamenting the failure of Runner Runner.) The end credits, depicting laborers assembling the stage, is another notch on the “teamwork” belt that still manages to have Timberlake pop in to crack a joke and look like the nicest, coolest guy in the world. Perhaps the stakes are too low to really criticize a project that generally works well enough on its own terms.

Justin Timberlake + The Tennessee Kids premiered at the Toronto International Film Festival and is now streaming on Netflix. See a teaser above.