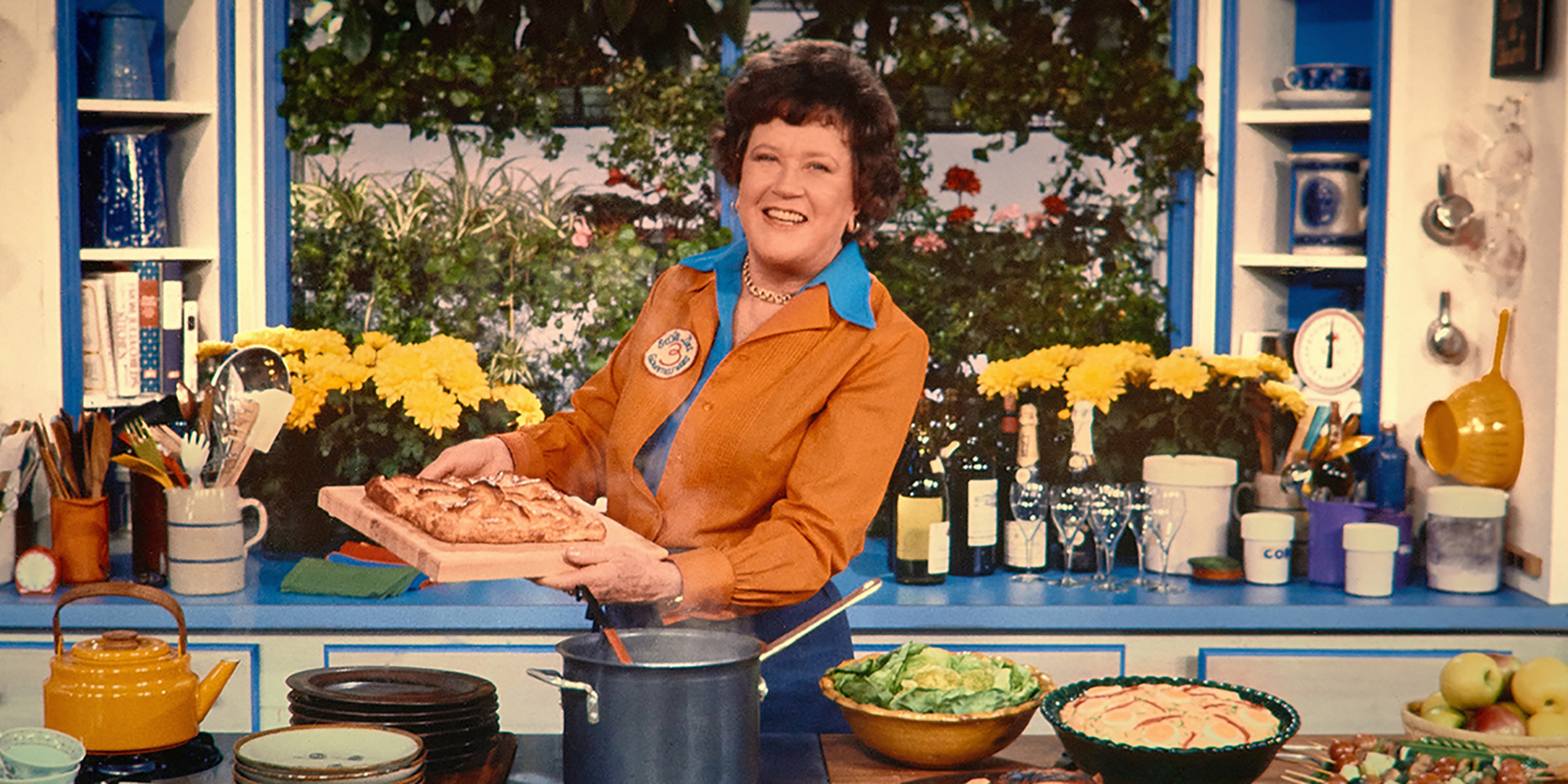 Booked to talk Mastering the Art of French Cooking on public access channel WGBH-TV, Julia Child took it upon herself to call the station and request a hotplate for demonstration purposes. She wanted to show a recipe in action to those watching rather than make mere conversation, and the extra effort turned this segment into a sensation—earning enough calls and letters to offer her a pilot. This cookbook that took 12 years to write via correspondence with co-authors Simone “Simca” Beck and Louisette Bertholle had been rejected, resuscitated, thrown on tour, and now transformed into a television show because of her unwavering perseverance and initiative. The upper-class daughter of a staunch California Republican was suddenly reborn as a pop-culture, liberal artist icon at age 52.

The details that expound on the “How” of that evolution are even more complex and wild than mere happenstance, though, so it’s only right that the woman everyone in America knew as Julia for four decades should receive a documentary to catalog them all. RBG directors Julie Cohen and Betsy West spearhead the effort by reminding us who Child became before rewinding to highlight each step taken along the way. From her Pasadena white, Anglo-Saxon upbringing demanding she be married to a good man to her serving in World War II as clerk in the Office of Strategic Services (OSS), every fork in the road became crucial to her next chosen path. Service led to travels, travels to Paul Child, and Paul to Paris.

With a wealth of high-resolution personal photography and archival footage, Cohen and West take us on the journey of Child’s second life far from the social norms of her upbringing until she lands in a French restaurant to taste a sole and find her true calling. Her training at Le Cordon Bleu comes thanks to the G.I. Bill. Her success as the rare woman in a field dominated by men comes from within. Talking-head interviews of friends, chefs, and biographers help fill in the blanks, while Child’s own voice can help situate ambitions and motivations during this formidable chapter in her life. We experience it all before finally returning to WGBH in order for her television career to begin.

Expertly researched and compiled to educate and entertain in equal measure—you should expect nothing less; that’s exactly what Child did on PBS’s The French Chef—the first two-thirds of Julia are impeccably drawn. Serendipity meets hard work en route to a celebrity existence that seemingly never went to her head, even as the talk-show appearances and comedy send-offs (those too young to know Child herself are probably aware of Dan Aykroyd’s hilarious Saturday Night Live skit) piled up. That the final third of the documentary feels scattershot while shoehorning in relevant tidbits—from Planned Parenthood and AIDS-awareness activism to career shifts with Good Morning America—is thus less about its rapid-fire nature than our undivided investment in the rest sans distraction.

The last act almost feels like the directors were doing their best to talk about those things that would have either slowed down and complicated the exquisitely rendered first two, or hadn’t yet happened until she left PBS. It’s all information we need to get the full picture of who Julia Child was, though, so we absorb it almost like a dessert to The French Chef‘s main course. That Cohen and West still have Paul to lean on as a through-line helps; this life they’re dissecting is nothing if not a love story. With excerpts from their early letters to the accounts of those who knew the couple best, none of what occurred could have been without this union—both practically speaking and emotionally.

That romance is evident through photographs and recollections as well as the sheer amount of fun Child has onscreen—with full support from her husband in an era when that was rare-to-impossible, even when the woman’s success didn’t surpass his own. That sense of joy and unbridled love, both for life and food, is what made her such an indelible public figure. Her flirtatiousness, sense of humor, and fallibility allowed her to both become a television star worth watching regardless of your affinity for cooking, and a role model to women (young and old) desperately in need of someone to inspire them towards careers and independence. It’s no wonder her impact was generational and continues to be so even after her 2004 death.

Add the slow-motion, ultra-high-resolution food-porn sequences and you might find yourself drooling while smiling. Cohen and West play fuzzy video recordings of Julia on-set before cutting to new, sumptuous footage of that same dish being made as though in preparation for b-roll advertising for a renowned gourmet restaurant. It’s similar to how she needed her food in differing stages of “done-ness” to keep her shows on schedule. We consume the decades-old look from Child’s kitchen (their low-budget causing each to ostensibly be shot as one long take so that any mishaps needed to be dealt with on the fly) and the current mouth-watering textures of crusted meat and caramelized fruit to realize how timeless her bringing French cuisine to American kitchens truly was.

Julia screened at the Toronto International Film Festival and will be released by Sony Pictures Classics on November 5.