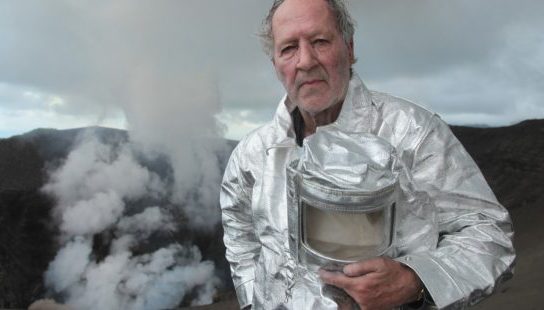 [TIFF Review] Into the Inferno

Volcanoes are perfect for Werner Herzog. There’s a reason he keeps coming back to them, from La Soufriere to Encounters at the End of the World. They are violent representatives of the Earth’s complete indifference to those who walk its surface – as Herzog calls them, “crawling roaches, retarded reptiles, and vapid humans.” Most of this grand sphere is magma, and life ekes by on a thin crust floating on its surface, occasionally disrupted when the magma breaks out. Finally, Herzog has made a documentary entirely about volcanoes. Into the Inferno is a world tour of how humans confront geology’s most ruthless caprices.

From the rim of Mt. Paektu on the North Korea / China border, whose millennia-long role in Korean mythology has been coopted by North Korea’s regime, to the Afar Depression in Africa, where archaeologists have dug up the oldest known hominid fossils, Herzog and volcanologist Clive Oppenheimer examine how people live in the shadow of ash clouds. This film is part volcanology lesson, part anthropological survey, part philosophical meditation. There is no single story; just a series of vignettes, each based around a particularly active, dangerous, or notable volcano.

The open narrative paradoxically gives Herzog freedom to be more creatively engaged than in any doc of his since Encounters (portions of which he appropriates here). One segment might be a lyrical series of shots of pyroclastic flows, the next an extended observance of the minutiae of fossil excavation. It turns out that a terrific variety of experience can be tied to volcanoes, and Herzog introduces the audience to everything from an Indonesian religious ceremony to North Korean propaganda games to a Vanuatu cargo cult.

Herzog, aware of his reputation as a madman, insists on camera that he is rather “the only sane filmmaker,” and that he takes every precaution when filming around volcanoes (though very few people should have multiple anecdotes about how they escaped being killed in eruptions). His reverence is reflected in the film’s style, which frequently depicts the mountains with religious awe. Choirs sing praises on the soundtrack as lava flows and bursts in slow motion. In contrast, the mundanity of human ritual is seen as insignificant. Even the logistically astounding mass movements of the North Korean ceremonies look like nothing but the coordinated efforts of so many colorful ants. Herzog is far more likely to be impressed by human eccentricity than grandiosity – like the enthusiasm of a particularly bubbly archaeologist, or the tenets of a cult which believes an American named John Frum will one day lead them to salvation, bringing chewing gum and refrigerators. But it’s all impermanent, ultimately. Into the Inferno is a memento mori aimed at the whole human race, and only Herzog could make one this non-pretentious, funny, curious, and respectful at the same time.

Into the Inferno is currently playing at the Toronto International Film Festival and hits Netflix on October 28.