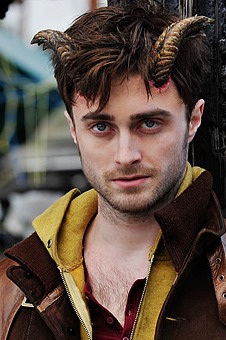 In a film festival climate which often seeks to grab attention through comparison — “it’s this year’s that,” or, just as often, “it’s this meets that” — we, ourselves, can play the comparison game: Horns aspires for Twin Peaks, but ends up as Twilight. It’s not simply a bizarre, supernatural tonal mishmash in the Pacific Northwest — though there is that — but, worse yet, a more-often-than-not strained collection of ugly misogyny and computer generated mumbo-jumbo. It should never be thought for a second that Horns is, not by design, a tonal mess, bouncing between brooding murder mystery, broad comedy, and romantic melodrama. The ultimate problem is that every note it hits has to be so noisy, reliably competent horror director Alexandre Aja getting lost in his own intent and influences while the film seemingly crumbles under its own narrative weight. After all, for the man who started out in torture porn (High Tension and the Hills Have Eyes remake), only to venture into camp with Piranha 3D — at either end, joyfully tearing apart human bodies — how will compassion enter into the fray? Well, not smoothly — to say the least.

In its simplest terms, Horns follows Ig (Daniel Radcliffe), a young radio DJ still living in his childhood hometown, is accused of murdering his girlfriend, Merrin (Juno Temple), while the town lynch mob makes his existence an utter hell. After an act of retribution that includes breaking and, yes, peeing on a Virgin Mary statue — this is all played completely straight, and to a laughable degree — and immediately followed by a one-night stand, Ig awakes with devil horns on his head. The sprouting of these horns affects those around him: they all, strangely, speak their minds to inappropriate degrees, and when the film signals that it’s time for some broad humor, their confessions reveal everybody in town to be a pervert. You must be wondering how, exactly, this lasts 123 minutes. Foolishly, the majority of the runtime is dedicated to flashback upon flashback upon flashback: charting Ig and Merrin’s childhood meeting; the night of her murder; and the motives of the shady townsfolk and family members surrounding them, all gradually adding more to the mystery. Yet the biggest reveals seems to be that it was essentially making a big deal out of so little, the reveal of the killer being utterly predictable and its accompanying CGI-filled climax nothing greater than just a rote resolution.

Had these flashbacks not been treated as exposition but, rather, genre indulgences within a film already full of as much, they wouldn’t have so often stopped Horns dead in its tracks. In something already running the risk of being deeply awkward throughout, the dragging anchor of portent only spoils what fun could’ve existed. Not helping matters is Radcliffe’s far-too-agitated performance, easily shamed by Juno Temple, who manages to bring a refreshing subtlety to a film devoid of any and to a character who’s basically a saintly holy lady, chiefly remembered through a motif of her dancing to David Bowie’s “Heroes.” Seeing Radcliffe unshaven, smoking, drinking, and having sex is, of course, supposed to make him appear adult — certainly in line with the film’s established exaggeration — yet he never seems totally in on the joke. In trying too hard, the actor is only stranded by his own efforts.

And, certainly to Horns’ credit, like Mr. Radcliffe, it tries. But, ultimately, its best results are too few and far between — to which excuses for its tone and intent can only go so far.

Horns premiered at TIFF. One can see our complete coverage by clicking below.