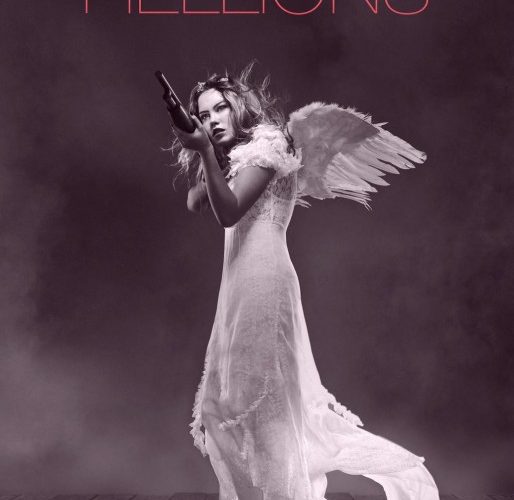 There’s a lot I like about Bruce McDonald‘s latest horror Hellions. Just as much also has me scratching my head, though. While this sometimes enhances the experience by cajoling you into wanting to watch it again to catch any little details you may have missed, I’m not sure this is one of those times. Unfortunately, right when the creepy factor breaks through its gauge to push me over the edge, it suddenly devolves into silliness. I don’t think it’s of the intentional kind either because screenwriter Pascal Trottier appears to hope it’ll continue down its hellish descent despite turning into what amounts to a warped but conventional psychological fantasy-filled afterschool special. It’s this result that tainted my journey, making me imagine what might have been if it were able to keep clenching my jugular to the end. Trottier’s idea to construct his nightmarish Halloween night on the theme of teenage pregnancy is one that works. What person is more over-saturated emotionally with fear, guilt, and a huge or tiny morsel of joy beneath them than a seventeen-year old who’s just received that news? Dora Vogel (Chloe Rose) has been created as the poster child of just such a situation. She can’t even begin to think about whether or not she wants kids because the more pressing issue of telling boyfriend Jace (Luke Bilyk) and her mother (Rachel Wilson‘s Kate) has her on the brink of tears. You don’t have to think to hard about the body horror possibilities of such a parasitic notion as a growing embryo either. Making the leap to demon baby sought after by demon children almost seems natural.

Enter the hellions of the title: a who’s who of ratty, demented trick-or-treaters like a young Pinocchio straight from Eyes Wide Shut, a burlap Baghead more menacing than the one in Trick ‘r Treat, and a blackened, bloodshot-eyed Raggedy Ann amongst others. First comes Baghead, silent at the door with sack held opened. Next come he and Buckethead giggling that perfectly chilling adolescent squeal with a severed head providing evidence of their bounty. Dora’s left alone to answer the door as Mom and Remi (Peter DaCunha) collect candy around town. It was to be a quiet night in to compute Dr. Henry’s (Rossif Sutherland) diagnosis, but now it’s become a fight for her life. A squall rips through the inside of her home, the power goes out, and the police haven’t yet arrived. But the children are multiplying. McDonald has everything going at full speed from the fantastic practical effects blowing hurricane force winds down her kitchen counter to the grotesque versions of otherwise cute costumes come to gut Dora and steal her spawn. Switching between reality and dream so frequently that we’re too disoriented to comprehend which is which, one sequence of kaleidoscopic dissolves quadruples the image in a gorgeously abstract pattern sandwiched between stationary anticipation and kinetic terror in the clutches of monsters. Add a haunting score of children in a high-pitched hum and you’ll be rocking in your seat to stay alert. No matter how good these aesthetic tropes are at cultivating fear, however, the content inevitably falls prey to nervous laughter before sadly devolving further into eye-rolls. The second act begs for a languid pace it doesn’t receive to let its drama breathe.

Instead the transitions between living and dead come at a rapid pace. One minute Robert Patrick‘s Sheriff Corman is being dragged screaming into the attic and the next he’s holding a disfigured child with the deep, distressed voice of the lead antagonist emanating from his mouth. The opening scene is repeated to make us wonder if anything is real or just the coping mechanism of a teen girl incapable of reconciling the fact she has another life inside. And where the costumed hell-spawn once bred trepidation, a sense of hokum is left. Perhaps this was intentional and meant to infuse levity into an otherwise darkly disturbing world, but it took me out of the mindset its start manufactured. Random carnage from a source that shouldn’t be capable makes way to contrivance, repetition, and too many red herrings. It’s a shame because Hellions looks amazing with its changing color palettes and memorable art direction of a Halloween gone wrong. Rose is very effective in the lead role, her Dora’s dismantling psyche falling apart at the seams once everyone who does arrive to help begins to disappear. Those surrounding her feel as though they are hyper-stylized in comparison—perhaps a comment on reality’s absence or a desire to change the tone from the serious nature it embraced at its introduction. Some shots will linger with you like that of a burning field of exploding pumpkins as ceramic-faced dolls carry Dora smoothly over them. Others will leave you unsatisfied from easy explanations of uncontrollable fever dreams rendering the supernatural aspects false. Thankfully the former still makes the trip worthwhile. Just know the pieces are better than the whole.