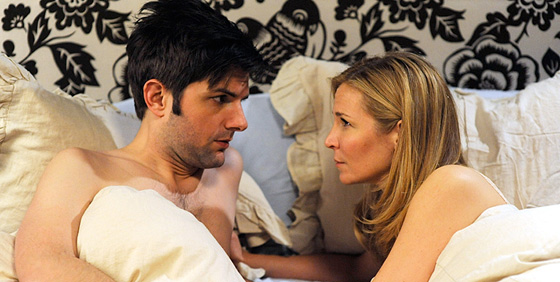 This has been the year of romantic comedies doing their best to overcome the genre and crossover to succeed with men and women alike. An unintentional reunion for four members of the Bridesmaids cast, the world premiere of Friends with Kids at the Toronto International Film Festival tries to equal its success in those regards. As star Jennifer Westfeldt’s directorial debut (she also wrote the script), she gives us some R-rated vulgarity, doesn’t pull punches and finds a way to tug at the heartstrings too. Built upon the idea that friends who couple and have kids will destroy what once was, the film delves into the psychology of two independent people on the outside watching the change alter their lives forever. Children trump late nights out on the town, language should be held in check and the limited destinations allowing crying babies hinder the friendships you once cherished more than anything else.

The old ‘party of six’ reservations are gone less than four years after the first child. Julie (Westfeldt) and best friend Jason’s (Adam Scott) lives of freedom come in direct opposition to Leslie (Maya Rudolph) and Alex’s (Chris O’Dowd) and Ben (Jon Hamm) and Missy’s (Kristen Wiig) marriages going to the next level. Cynical and selfish, these two enjoy the single life and not having to worry about ‘the cards’ the others must play when free time is few and far between. If they want something they just reach out and grab it, no questions asked. They don’t necessarily hate what has happened—the group only got larger and stronger with the additions—but a sense of being replaced can’t help but surface. And when they too realize they want kids in the future, mixed with a night of heavy drinking, a foolproof idea is hatched.

If two people want children badly, they must sacrifice their own happiness in marriage to get one. This is the conclusion Julie and Jason create. But what if you could bypass the marriage, the inevitable self-loathing and divorce? What if you could have a child as single parents with joint custody, remaining friends and never risking the eventual discovery or Mr. and Mrs. Right waiting in the shadows? These two New Yorkers are successful, caring and in love—they simply aren’t attracted to one another. So what could go wrong if they have a child? They live in the same apartment building, so travel time is just an elevator ride away, letting them stay single, attractive and available. It’s a win-win situation their friends refuse to say is a horrible idea, so the experiment is set. Sex is used for procreation and nine months later a baby boy named Joe enters the world. And now the drama begins. Westfeldt has really dug into her own psyche and pulled out an intriguing tale that interestingly shows the progressive definition of love. We watch she and Scott’s Jason hang out, call at all hours of the night and tell each other their deepest and darkest secrets. We know they should be together—as does the rest of crew—but somehow this plutonic relationship is enough. They are the best of friends and would die if anything changed that, making the addition of a baby to the equation nothing but damage, right? Yet Westfeldt finds a way to make it work. These two aren’t afraid to be diplomatic when it comes to the truth and basing a union on that principle makes them the ideal non-couple. Jason fearlessly tells a naked Julie she’s still three-to-five weeks away from letting that body back into the hunt; Julie takes Joe back to her place when Jason has a lady friend over for some intimate alone time. And their friends all watch in stunned silence.

They say this arrangement is an affront to marriage—Leslie believing it mocks what she and Alex have—while also looking upon it fondly, the irreparable damage to their own coupling giving pause to wonder what they did wrong. But this is a romantic dramedy and the confusion surrounding plutonic love with a baby must at some point come to the edge of reality. When Jason meets a young, sexy dancer in Megan Fox, Julie finds latent feelings for him. When Julie meets the Adonis incarnate in Ed Burns, Jason gets jealous and needy, the physicality of a woman who is vocally opposed to having children no longer enough. The plot hits a few bumps here as the Hollywood ending yearns to find a realistic path with just enough resistance to make us care. The film falters slightly as a result, going overlong by delaying what we all know will happen.

But if you look beyond the genre clichés, Westfeldt has created a unique look into the many different kinds of relationships swirling around. Hamm and Wiig are the weakest links, their characters turning mean and unlikable fast even though the laughs continue. She gets considerably less screen time than the rest and he the latitude to be serious and goofy, two things he does well. Fox and Burns do their best to be the opposite of what Julie and Jason are respectively, though they’re more pawns to be played than detailed human beings. They are the catalysts caught in the middle of a group of friends with way too much baggage, so their insecurity at a big New Year’s get-together is authentic. Rudolph and O’Dowd shine as the loving, snarky couple both angry and sensitive in the same breath. His Alex is given some of the film’s best lines and her ‘bitch please’ face in response is pure gold. This is marriage, two people in love who compromise and butt heads while always remembering why they chose each other.

At its core, though, Friends with Kids is about us believing Westfeldt and Scott would actually be ‘friends with baby.’ Their dynamic is completely authentic and while she sometimes feels unnatural reading the lines she herself wrote, Scott’s Jason is a revelation. The film is at its best when the two are mocking the world and oblivious to everything else. So when the bottom falls out and they attempt to pick up the pieces, we know there’s a chance what they had will never be rediscovered. It’s the quiet storm of Jason explaining why he wanted Julie to be the mother of his child that steals the show, his compassion and commitment letting us forgive his pigheaded, womanizing ways. It’s Julie and Jason against the world, a team that can overcome everything. So when the stakes are high, the question becomes whether they can overcome each other. That journey is just funny enough to accept contrivances and the drama it brings real enough to grab hold.