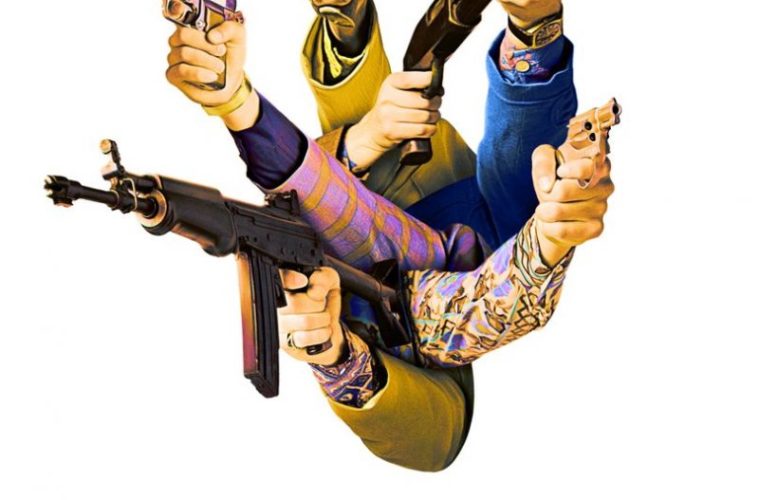 TIFF’s Colin Geddes was correct when introducing Ben Wheatley’s bottle episode of a film Free Fire with the words: “This will wake you up.” The gunfire alone risks perforating your eardrums as John Denver blares from a 1978-era van’s eight-track, but I think it’s the surprising wealth of comedy that ultimately gets the blood pumping and synapses triggering. Wheatley and wife/writer Amy Jump’s latest isn’t for everyone — fair warning to Hardcore Henry detractors, Sharlto Copley refuses to quit his shtick — but those willing to break free from a desire for plot complexity will undoubtedly be entertained. This is low-brow Reservoir Dogs, extreme genre action meant to energize you with an insane cast of characters hell-bent on killing each other on principle. Although that briefcase of money is appealing too.

It’s all centered on a deal made by American middlemen Justine (Brie Larson) and Ward (Armie Hammer). They’re matchmakers with the former bringing IRA players Chris (Cillian Murphy) and Frank (Michael Smiley), the latter gun-runners Vernon (Copley) and Martin (Babou Ceesay). Weapons for money. Simple, clean. Except for the fact that both sides need to also bring muscle to look tough and do the grunt work. Unfortunately for this sextet of professionals and brilliantly for us, one half of each opposing pair are already acquainted. And by that I mean Jack Reynor’s Harry having just beat the crap out of Sam Riley’s Stevo the night before. So the ordeal is a powderkeg waiting to explode and I haven’t even mentioned the unknown snipers still out-of-sight.

Rounding out the main cast is Stevo’s BFF Bernie (Enzo Cilenti) and Harry’s cohort Gordon (Noah Taylor). They all talk a big game and they’re all packing heat. One sideways exchange and BOOM. Someone pulls a trigger, someone else’s limb gets shot, and a war breaks out. Bullets rain down with an accuracy ratio of at best one-to-five as the wounds being leveled are mostly surface ailments, everyone wrapping up before limping or dragging themselves behind whatever new obstacle found between themselves and their enemy. Direct hits earn more laughter than winces in pain from both them and us. And eventually no one knows who’s on who’s side. Even those who do can’t help but accidentally shoot their own in the unbridled chaos.

Vernon’s the big-mouth coward constantly seeking a way out, his partner Martin a slab of meat who may or may not be dead at any given moment. Justine and Ward attempt to keep the peace as long as humanly possible (until they too get hit by crossfire) while Chris and Frank hope to survive long enough to call their IRA brothers for extraction. The repartee is witty and the physicality brutal in its utter lack of remorse. The film’s title is not lying, because safeties are off and bullets are surely firing freely. Tiny sub-missions are hatched whether sneaking upstairs, killing a nemesis, getting the cash, or finding ammunition for the crates of automatic rifles lying in the middle of this abandoned warehouse. Survival seems bleak.

Interesting details are revealed and then forgotten — Vernon’s stash of bullets that could enrage the Irish enough to spend time hiding is never mentioned again — but then the whole premise is sort of a MacGuffin anyway. Just because the deal is the reason they’ve converged doesn’t mean we care about it past the twenty-minute mark. This romp is about the characters and their colorful personalities lobbing insults with much better precision than lead. Will players switch sides? Will they team up against a common enemy? Or will ego win as it becomes every man (or woman) for himself? These are the million dollar questions as the surface mystery unfolds. Does anyone really care if they’re answered? No. They merely change each shooter’s target ever so slightly.

Much of its charm comes from the period aesthetic with hairstyle and costumes transporting us back to 70s Boston despite never leaving the direct vicinity of a virtually non-descript warehouse — itself a punch line once its former product of manufacture is exposed. The film’s pulpy but authentic with junkie hoodlums, flashily-dressed arms dealers, and business-first soldiers requesting the means to enact righteous violence rather than the frivolous sort they’re forced into here. The action can get confusing when everyone is shooting at once, but the injuries are hilarious via nonchalant reactions, shrieks, or drug-assisted kamikaze efforts. Fire, explosions, and vehicular manslaughter all appear and we begin wondering if anyone will be left alive once the dust settles. As is, they’ll have scars and a limp at least.

In comparison to his other films, Free Fire is definitely Wheatley’s most accessible. Short and to the point, there isn’t even time to pick a deeply-flawed someone to champion. If anything we hope each earns an exciting, gruesome, or absurd death to cringe or laugh at and never forget. Imbeciles are imbeciles, seasoned vets no better than the company kept, weapons wielded, and vantage points afforded. Sometimes it isn’t worth shooting and oftentimes it’s fun, each actor bringing his/her stereotype to life with theatrically rhythmic interactions lending them to the stage. A surefire cult classic in the making, its unhinged carnage proves a memorable delight. It may not be original, but it’s an adrenaline shot I sorely craved.

Free Fire premiered at the Toronto International Film Festival and opens on April 21.