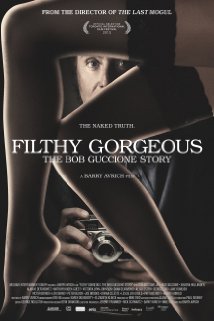 Intimately told by those that were closest to Penthouse Magazine founder Bob Guccione, Filthy Gorgeous by Barry Avrich is a rich, fascinating and entertaining portrait. I approach this material cold as a product of the internet age, and the film points out the niche Playboy and Penthouse once filled, which has been replaced by Maxim. Folks like Guccione and Hugh Hefner won the sexual revolution, later fighting the “Moral Majority” and the Reagan Administration on freedom of speech. Guccione spent the later part of his career as the publisher of Penthouse, exposing the hypocrisy of the religious right and when they attacked him, he exposed who they were sleeping with on the side.

Guccione is portrayed compassionately as an artist who, like many artists, was never quite a skilled businessman. Growing up in a tight-knit Sicilian family in Bergenfield, NJ, he had a genuine respect for women — in fact that was part of the magic of Penthouse. While photographing his “pets,” he would do so with the kind of obsessive respect that made them try harder to please him, leading to some great, seductive images. His eye is incredible, and his spreads took, in some cases, as many as three days to complete. He also valued the contribution of women in his office — we learn “in those days” women either came to work for Penthouse or one of the fashion magazines. Barry Avrich tells this story through Bob’s personal assistant Jane Homlish and two of his sons (Bob Jr. later became the publisher of Spin). Ultimately, Penthouse moved away from its classy roots, embracing hardcore pornography and fetish imagery. Originally launching in Britain as a more regionalized version of Playboy, it jumped across the pond, catching up with and surpassing Hefner. Guccione, a sentimental artist, originally sold photographs of pin-up girls by mail order before expanding into publication. We also learn of his interests in science, including a failed investments such as a health magazine (Longevity), a science journal for a general audience (Omni), and a nuclear power plant.

A fascinating journey, the story is told via archival footage, first beginning with his death in 2010 and tracing back to his roots as a family man (his first marriage was not meant to be) and a publishing mogul. Honest, he never quite played the game that would launch him into the next tier, as Avrich tells the story of Bob’s failed bid to build a casino in Atlantic City. Losing $145 million on that deal, Bob proclaims himself the “all time biggest loser in the history of Atlantic City.”

Engaging, entertaining and passionately told, Avrich has created an excellent behind-the-man documentary, complex as the man himself, all while the story aims to demystify our subject. Beyond the open shirt and gold chains, we discover a generous, honest artist — qualities that don’t always translate to business. Like AOL paved the way for, and ultimately took a back seat to, Facebook, Penthouse paved the way for countless magazines, including the Sports Illustrated Swimsuit Issue and the aforementioned Maxim. At one time it looked as if Penthouse was going to retreat towards lifestyle content and reporting (and evolve away from nudity). A comprehensive study, Avrich has uncovered an important tale of the sexual revolution: skillfully telling a vibrant and engaging story.

Filthy Gorgeous: The Bob Guccione Story is screening at TIFF and opens theatrically in Toronto in October.