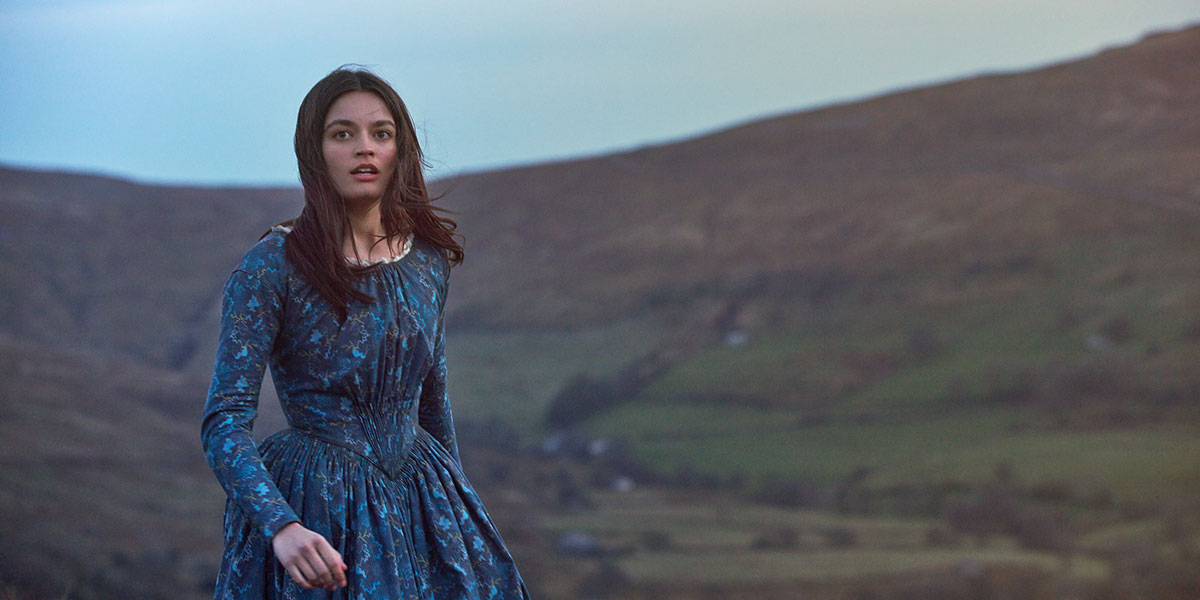 Emily, the directorial debut for Mansfield Park and A.I.: Artificial Intelligence star Frances O’Connor, is one of the more remarkably assured first efforts in recent memory. Shot with breathtaking beauty and acted with extraordinary emotion and grace, this exploration of the life and development of Emily Brontë is tremendously enveloping. Emily looks deep into Brontë’s life story for evidence of what that really means. While it is unclear how much of the film is historically accurate and how much is conjecture, O’Connor’s account of the author of Wuthering Heights feels respectful and well-reasoned.

Emma Mackey (Sex Education) plays Emily Brontë as an intelligent, emotionally fragile figure attempting to figure out where she fits in both her family and the world-at-large in 1800s England. She lives with her mostly dour father, her younger sister Anna (Amelia Gething), and older sister Charlotte (Alexandra Dowling, excelling in a difficult role). Hovering on the outskirts is her rambunctious brother Branwell (Fionn Whitehead), whose wild embrace of art and pleasure—he is a heavy drinker and carouser whose motto is “freedom of thought”—is a major influence on Emily as she ponders a somber life of following in Charlotte’s footsteps as a teacher or becoming a writer.

Into this milieu arrives William Weightman (played with an appropriate mix of morals and lust by Oliver Jackson-Cohen), assigned to tutor Emily, but whose initial annoyance with each other turns to passion. However, their affair is doomed to not last. In O’Connor’s telling of Brontë’s life, this experience and its sad end are the impetus for Wuthering Heights. Other elements of Emily’s past—the death of her mother, the constraints placed upon women of that era, the feeling of being considered “the strange one”—also lurk in her mind.

Watching Emily move toward its sadly inevitable conclusion, it is difficult not to wonder about some key details. Was there a figure like William Weightman in the life of the author? Did thwarted love with this individual contribute to the development and writing of Brontë’s gothic masterpiece? And is the relationship between Emily and her siblings—specifically her often combative feelings toward Charlotte and her simultaneous admiration for and upset with Branwell—accurate? These questions, however, are to be explored after watching the film. It is better to swim in O’Connor’s confident vision than to drown in its verisimilitude.

It will undoubtedly prove interesting to hear from Brontë scholars. For a general audience, though, there is no question Emily will prove emotionally impactful. Beautifully shot by Nanu Segal and featuring a wildly innovative score by Abel Korzeniowski, Emily is a noteworthy achievement for all concerned. In particular do Mackey and O’Connor stand tall. Mackey brings one of literature’s most iconic figures to life as deeply passionate and racked with uncertainty; her Emily Brontë is genuinely unpredictable but always believable. A star-making performance, to be sure.

And O’Connor, who also scripted, adroitly manages the feat of making a 19th-century period piece burst with contemporary feeling. At 130 minutes, Emily is slightly overlong; some moments with Branwell, while involving, could perhaps be excised, while at times it seems we could use more of the interplay between Emily and Charlotte. However, the film captivates until the end. Perhaps the greatest praise one can give Emily is that once it is done, the audience will feel an intense desire to read or reread Wuthering Heights and contemplate Brontë’s depth of vision and feeling. What more could one ask for from a literary biopic?