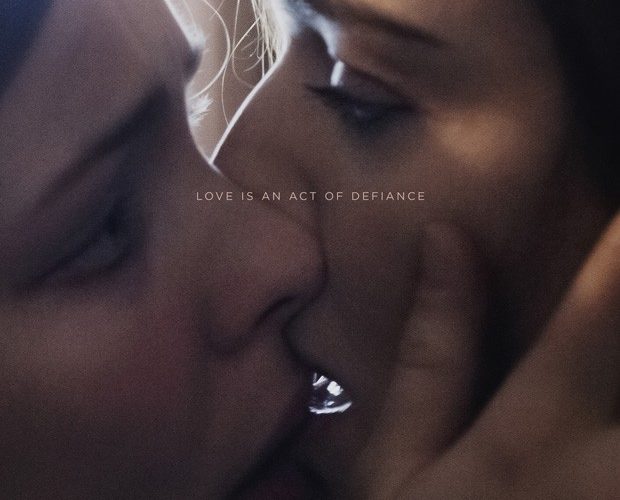 It starts with a London-based rabbi speaking from his heart about the complexities of life. He stammers through — obviously ailing — until collapse. Suddenly we’re in New York City watching a photographer in-session with tattooed seniors. The phone rings and we know. She (Rachel Weisz’s Ronit Krushka) is the daughter of that rabbi and he has passed away. The assumption is that both these worlds will subsequently collide in reunion. Tears will be shed and hugs had. But that’s not quite the case with Sebastían Lelio’s Disobedience. Ronit has been gone for some time and the leaving wasn’t under good terms. Her arrival is thus met with shock, bewilderment, and perhaps some anger. We sense the old wounds shared by all and ready to witness as they’re ripped open.

Based on the novel by Naomi Alderman, Lelio and co-writer Rebecca Lenkiewicz’s script does well in keeping answers to this tension unknown. The repression and oppression at the back of this communal past proves paramount, what transpired becoming less important than the attitudes cultivated. Rabbi Dovid Kuperman (Alessandro Nivola) is startled upon seeing her on his doorstep, but a smile soon forms regardless. They were friends in their former lives and that affection remains despite the time away and rumors swirled. Ronit’s Aunt Fruma (Bernice Stegers) is genuinely pleased to see her instantly, her Uncle Moshe’s (Allan Corduner) greetings full of skepticism and caution. As for the rest: those who know her hold their collective breaths while those who don’t wonder why and if they should too.

Esti (Rachel McAdams) is the last to see her, their brief interaction stilted for reasons we wrongly assume. She, Ronit, and Dovid were inseparable in youth, the lines between friendship and romance blurred. One could call it a love triangle, but “third wheel” would be better. And while the easy guess fingers Dovid as affection’s object, he’s not. It’s not a spoiler to say — considering the film has already adopted an “Orthodox Jewish lesbians” reputation — Dovid was actually that third wheel. Disgrace, embarrassment, and guilt tore them apart thanks to their existence within a community that could never allow what ultimately transpired. Ronit left to literally survive while the rest remained to do right by their traditions. In the end all became imprisoned whether through loss or gain.

The complex character study born from such volatile and public history erupts through the pleasantries of habit. You’ll be surprised how many different ways the phrase “May you live a long life” can be uttered, each possessed with meaning beyond the words themselves. They hit their target (Ronit) with extreme force, her patience and calm deflecting the first few until her headstrong forthrightness can no longer keep opposing views in check. Dovid hopes she’ll stay civil and that his community won’t poke her until she’s not. He hopes to honor her father as the pillar of greatness he was to them. But as the days go by this prayer remains unanswered. Worse than that, the feelings between Ronit and Esti return to put reputations and livelihoods at risk. Focus is and should be on the women stuck between desire and duty, but don’t discount Nivola’s Dovid. He’s the heir apparent to Ronit’s father as the leader of their Orthodox faith, but also still attached to those that almost brought everything down. Married to one and trusting the other, he’s positioned to either be the mediator between his world and its outliers or the former’s judge and latter’s executioner. In him we see devout faith tested by humanity — something the previous generation could never fathom. He put himself in that position, believing faith and the word of God as taught to him was enough to set things right. Dovid thought everything he does is for Esti, but now he must question if it’s actually for himself.

It’s no surprise then that the character we most empathize with is McAdams’ Esti. She’s the one caught in a tug of war that’s existed since she was a child. Whereas Ronit had the strength to leave everything behind (perhaps because of how her father reacted to what happened without the compassion blood should have provided over belief), she’s too entrenched in her religion. This community is all she’s ever known. It’s been her duty to become frum: wear her wig, marry a good man, and have six or seven children. It’s been ingrained in her that her feelings are wrong, impure. Salvation according to the Torah overshadows any personal hopes for happiness. Her work as a teacher is enough to sustain her lack of an identity.

By comparison, Weisz’s Ronit knew her birthright wasn’t acceptable. If she were to give up her identity to follow her father’s rules she would have killed herself. That self-betrayal would have proven too much. But her escape didn’t “save” her. Maybe Ronit got away from the oppression women in her family had blindly accepted for millennia, but she also left everything behind. Suddenly she was an empty vessel of pure emotion who erased more than ten years of existence in the blink of an eye. She couldn’t reach out to those left behind. For all she knew she was dead to them. Ronit had to build a new life and identity alone, one in which she filled the void in her heart with sex: pleasure and pain intertwined.

Her return to London is therefore a grenade with the power to force this trio to look beyond edicts set in stone. It provides her an excuse to forgive her father posthumously (despite the vile words of others presuming it was he who needed to forgive her). It provides Esti a reminder that there’s more to living than existing as a pawn within a hierarchy she never had the opportunity to choose. And it gives Dovid the crisis he needs to fully understand what it means to take over their congregation. The explosive collision of their presents is a test they all must endure, one that will prove whether their actions (Esti staying and Ronit leaving) are purely theirs to own or products of outside interference ingrained within.

Disobedience‘s journey is one of authentic emotional honesty excelling in instances of insecurity and fear. No matter how raw Esti and Ronit’s love and passion, the abject horror of being discovered trumps their pleasure. It’s this depiction of repression that will break your heart because it has the potential of grabbing hold so strongly that free will becomes buried forever. Everyone is an adult now with responsibilities stretching beyond individual hopes and dreams. The more they let themselves have what they crave, the more they may agree that it’s “wrong.” This is the silent abuse wrought by an authority transcending the physical world. This is God being used as a tool for hate by those quick to shame the ones they should protect. Change, however, is still possible.

Disobedience premiered at the Toronto International Film Festival and opens on April 27.