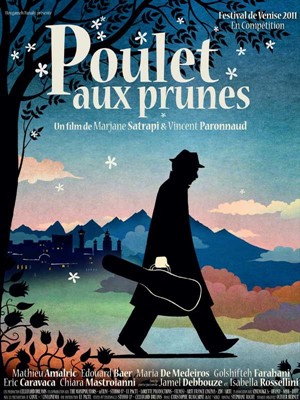 While most feature animations deal with talking animals and anthropomorphized toys, it was joy when we received Marjane Satrapi and Vincent Paronnaud‘s deeply personal, auto-biographical Persepolis. Brimming with inventiveness, the 2007 black-and-white animation not only provided comedy the medium is accustomed to, but added a layer of social awareness and history I never expected. The grueling process didn’t sway the filmmakers from tackling something in an even larger scope, as they step into live-action with the delightful and emotionally effective Chicken with Plums.

Mathieu Amalric (The Diving Bell and the Butterfly) is the artist Nasser Ali (a fact he makes particularly clear), whose cherished violin has been broken into pieces by his wife Faranguisse (Maria de Medeiros), a woman he never truly loved. Destroyed, he decides to kill himself but doesn’t follow through with his many ideas on how to do the act (told in a montage played for laughs). Instead, he goes into an eight-day slumber in his bed where he looks back on his entire life, as well as the future he will leave behind.

As dreary and depressing as this may sound, the style is the on the exact opposite side of the emotional spectrum. There are heartbreaking moments, such as meeting his true love Irâne (Golshifteh Farahani) after being apart for decades, only for her to ignore him because the time for them is over. But Satrapi and Paronnaud have a playful, lively tone engrained in almost every scene. As Ali lays in his bed the film is split up into eight days, separated by title cards. I’m a sucker for movies that can capture the essence of an entire life in the span of a feature film. Chicken with Plums is more Synecdoche, New York than The Curious Case of Benjamin Button in this sense, as we are detached from an actual chronological order. By pulling bits and pieces, whether it be the future of Ali’s children or his first encounter with his wife, the filmmakers have managed to remarkably convey a man’s life in just over 90 minutes.

Almaric conveys deep emotion here with his wide, piercing eyes; a man whose truly sorrow may have been different if he was able to find true love. If Satrapi and Paronnaud continue the lengthy, detailed process of blending fantasy animation with live-action on their next feature, it may be awhile before we see it. Cherish Chicken with Plums, as it is one of the most stimulating, visionary films of the year.