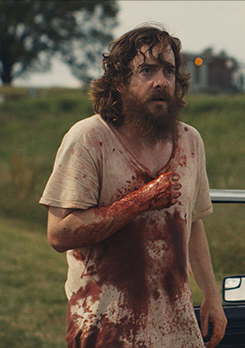 92 minutes of taut physical activity, morbid humor, and gruesome violence, Jeremy Saulnier’s Blue Ruin is one of the year’s leanest and most impressive killing machines. Saulnier begins his film with quiet, character-building chapters, but once he sets his resourceful, pleasingly narrow plot in motion, Blue Ruin becomes nothing more than a series of sharp, vicious set-pieces founded on Nash Edgerton-like bursts of violence. The film is a good example of the kind of genre treat that gets points for disposable ambition: Saulnier’s technique is so controlled, and his sequence staging so clever, that nothing else really matters.

Macon Blair — who appeared in Saulnier’s 2007 feature debut, Murder Party — stars here as Dwight, a drifter living out of his beat-up 1990 Pontiac. Sporting a Ben Foster-in-Rampart beard, Dwight’s existence is a series of small struggles: sneaking into homes to take a hot bath; swiping food from dumpsters; walking down random streets, which Saulnier, acting as his own D.P., shows us in elegant lateral tracking shots; and passing time on the beach, where he stores his car, which is covered in rust and bullet holes. Saulnier and Blair keep things teasingly vague at the outset, which creates a delicious tension, and is a hallmark of confident storytelling; they’re daring us to ask ourselves, “Why are we spending so much time with this seemingly innocuous individual?” Answers begin creeping in when a police officer asks Dwight to come down to the station; she tells him that a murderous man connected to Dwight’s past is being released from prison after a two-decade stint. Dwight drives to the prison, and we see the murderer being greeted by his limousine-touting family. Dwight tracks the limo to an isolated bar, hides out in the bathroom, and, in the blink of an eye, stabs the ex-con in the neck. This is an awesomely claustrophobic scene, with Saulnier reserving a generous amount of time for gripping anticipation: a number of effective beats just sit with Dwight in the bathroom stall, milking the expectation of carnage for all it’s worth. And when the kill does come, it’s chaotic and messy, reminiscent of the unforgettable stabbing that sets Jacques Audiard’s A Prophet into motion.

More backstory kicks in when Dwight, on the run from the dead man’s now-revenge-hungry family, stops at his sister’s (Amy Hargreaves) house to inform her of the situation. By this point, Dwight has cut his hair and shaved his beard, allowing us our first clean look at Macon Blair’s face, which is basically the only thing the actor needs to draw on for this performance. It’s a good face, though, comfortably restrained both in silence and in conversation, and conveying both the character’s sneaky intelligence and his hangdog insistence on seeing this battle of bloodshed through to the end. He has an everyman quality, too, which is important for this role: as smart as Dwight can be, it’s even more crucial for him to be constantly vulnerable, or else the pangs of suspense on which the film rests wouldn’t compute.

In addition to Hargreaves, Blair also gets supporting help from Devin Ratray (Buzz from the Home Alone films; more prestigiously, Alexander Payne’s upcoming Nebraska), playing a gun-nut childhood friend of Dwight’s. Their scenes consist of brief bonding and discussions of firearms: rifles, machine guns, pistols, bullets. Saulnier’s obsession with these objects, and the intricate detail with which Ratray describes them, inevitably raises gun-control-related themes — which, along with the backwoods location work and automobile-inspired title, aligns Blue Ruin somewhat with Alexandre Moors’s Blue Caprice. It’s worth noting, though, that Saulnier’s camera is equally hypnotized by relatively less-lethal items: hammers, bone saws, pitchforks, discarded glass, blood-stained money, even flashlights and medical supplies. (There’s a horrific scene in which Dwight attempts — and miserably fails — to remove an arrow from his thigh.) This creates within the film an exciting, propulsive pace, because Dwight is always doing something, or holding something, or aiming something.

Blue Ruin’s best set-piece involves Dwight, an enemy Dwight has been storing in the trunk of his car, a gun, a long conversation, and a shock-scary act of violence. This scene embodies exactly what’s right about Blue Ruin: it starts with a classic, barebones situation (two rivals, one armed, one unarmed), and then asks Saulnier to fill in the blanks of the scene with what he can do as a filmmaker. He shows a trove of potential: funny, cunning dialogue; a witty awareness of the foolishness of the scenario; clean, dynamic blocking; and the lurking possibility of slaughter that can pounce at any moment. By the end of the film, the combination of these elements leaves you both viscerally exhausted and intensely excited to see Saulnier’s next film.

Blue Ruin will screen at TIFF on September 9th and 11th. Watch a clip above and click below for our complete coverage.