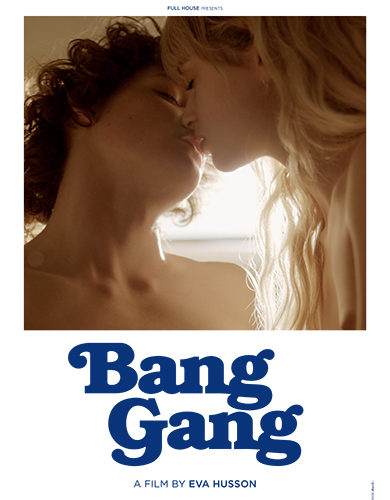 A post-9/11 world rife with domestic terrorism is one our youth should be allowed to avoid. Parents seek an escape as well, though, something that risks leaving their kids alone without supervision for longer than recommended. This concept is never more prevalent than within the affluent sector of society where expendable income and exotic jobs leave a ton of latchkey children trying to defeat boredom. Internet connectivity provides whatever their hearts desire, freedom the ample opportunity to do as they please. Social pressures must be relieved and sex is easily the quickest and cheapest way to do so.

Maturity, however, renders such a laissez faire attitude problematic, especially when physical release isn’t the initial purpose of their pleasure. Eva Husson‘s Bang Gang (A Modern Love Story) begins with the alternative: love. George (Marilyn Lima) doesn’t anticipate it as Alex (Finnegan Oldfield) was meant to merely be her latest conquest, but feelings force their way in. He’s less interested, playing games by ignoring her until he knows rekindled contact will guarantee another carnal encounter. And in great adolescent fashion she rejects her idea of love in order to ignore the pain of his indifference, blowing it off with best friend Laetitia (Daisy Broom) until she reads the response as a green light to take her own turn with him.

Hell hath no fury like a lover scorned and George’s pain evolves into hatred alongside a conniving spirit to find untargeted revenge. If sex has become no holds barred, why not sanction it with a game? Alex’s friends are pretty much up for anything so she feeds that desire with a hardcore version of spin the bottle. Hormones flow and everyone pairs off in an orgy no one could have anticipated when they walked through the door—all to make Alex look at her again. It’s so successful that more and more are planned. The numbers increase, a private website publishes photos and videos, and experimentation turns to consensual pornography. Despite the bacchanal, though, George cannot shake Laeti’s betrayal.

It’s a coming-of-age tale with consequences more serious than being ridiculed in front of classmates. The stakes here can ruin lives and the decision of so many participants to openly post documentation online is asking for trouble. If only George and Laeti could simply talk out their issues rather than delve deeper into the anonymous limbs writhing within every room of Alex’s house, things might be different. But when guys like Nikita (Fred Hotier) are more than ready to satisfy this sexual contest’s call for players—a contest Laetitia leads the charge of despite being a blushing virgin at the start—and cupid’s arrow continues striking at will, there will be no end until the devastating bottom drops.

Sex becomes their weapon to combat society and forget terrorism like the news’ train de-railings. Their sexuality is something they own that their parents cannot touch and they’ve found themselves embracing its power. Husson’s film isn’t just a highly produced porn, though, as each character is allowed reasons for taking off their clothes. Laeti is sick of her over-bearing father (who actually isn’t); Alex is lonely with his mother working in Morocco; and on-the-fringe-player Gabriel (Lorenzo Lefèbvre) is dealing with the tragic accident that left his father paralyzed and in need of constant supervision. A single, secluded empty house gives them a playground and all that’s in their way is jealousy and ego.

Love itself isn’t often lingered upon besides carefully placed reaction shots of pained expression, breathing life into those stubborn survival instincts kicking in to escalate the fun. This ensures the pace never slows from a wildly memorable opening tracking shot through Alex’s home with cinematographer Mattias Troelstrup weaving around bodies in disparate states of undress talking, dancing, and engaging in every sex act imaginable. It’s an intriguing glimpse at the future before rewinding a couple months previous because this liberating scene of teenage magnetism isn’t quite as uninhibited and no-strings-attached as it seems. We don’t yet know what these faces reveal because we haven’t yet learned what’s pushed them to the brink.

Artfully shot and directed with a killer soundtrack of synth beats cranking the visuals up and down in rhythm, Bang Gang delivers on its promise of modern love. While an authentic evolutionary conclusion to the actions onscreen eventually arrives, I can’t help feel it’s too harsh a halt. Everything’s at such a fever pitch from the pleasure seeking to the overzealous mistrust that any end would probably prove a bit of a whimper regardless—unless Husson let their pile of sweaty bodies go on into the sunset with abandon. Her final choice isn’t without merit, though, bringing consequences for children and adults alike. The idyllic fantasy is just too tempting to accept any reality check waking them and us up.

Credit to the young actors who hold nothing back and truly invest in Husson’s mission to embrace taboo. Every word uttered and move made is flirtatious, each emotional jolt inviting a hellish state of pleasure fate must catch up to before it’s over. There’s nothing precious about their characters as innocence falls by the wayside early on. One slap to the face by a disapproving dad leads his daughter down a complicated path into the arms of someone else’s safety net. From watching to partaking to recruiting, the evolution of Broom’s Laeti and Lima’s George can be scary to witness. Every parent’s nightmare and every kid’s dream, this slippery slope leads towards a rebirth only ruin can provide.

Bang Gang (A Modern Love Story) is screened at TIFF and opens on June 17.