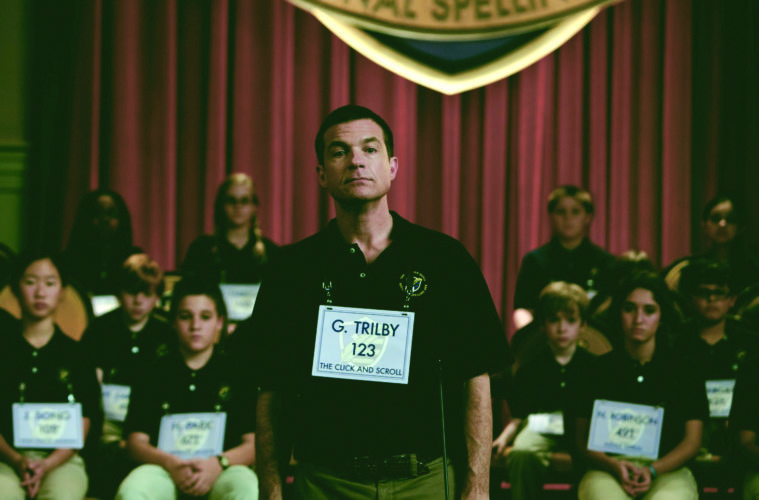 Perhaps Jason Bateman is tired of playing the likeable voice of reason amongst more idiotic counterparts, an character that his iconic turn as Michael Bluth on “Arrested Development” has typecast him into performing ever since the show’s cult success. Whether it’s Horrible Bosses, The Change-Up or Identity Thief, he’s played some variation of the consummate straight man with unparalleled comedic timing. With his directorial debut, Bateman has finally found a role that will let him prove he can be the mercurial, loudmouth dickhead, while everyone else on the periphery can attempt to appeal to whatever morsel of humility he may have left.

Welcome to Bad Words, Bateman’s vulgar directorial debut written by Andrew Dodge and starring himself as the vengeful Guy Trilby on a quest to win a middle school spelling bee at the age of forty. Yes, this film is about a grown man—with an eidetic memory no less—competing against kids in eighth grade or younger on national television. Brilliant fodder for heartfelt friendship tropes and psychological makeovers courtesy of cute little children who warm the cold, black heart of the evil, vindictive bully, right? Well, that and a fantastic setting to let curse words fly, as tempers flare and decency is thrown out of the window due to Guy not wanting to make friends — in fact, the more people who hate him, the better.

Pouncing on a loophole in the National Spelling Bee’s bylaws, Guy legally entered himself into the contest much to the chagrin and violent reaction of parents who’ve spent way too much on coaches and tutors, so their kids could have a shot at the fifty thousand dollar grand prize. We don’t know why he’s doing it and even reporter Jenny Widgeon (Kathryn Hahn) is in the dark towards his motivations, despite being his media sponsor. And while she was promised answers for the story she’s writing on the whole ordeal, he has been less than forthcoming along their road to the championships. The Bee’s founder (Philip Baker Hall) and president (Allison Janney) both plead for his resignation upon his arrival, but Guy stands strong, rolls with the punches, and thwarts every devious maneuver used against him. The only one with a shot at breaking through his steely determination to ruin the dreams of so many children is little Chaitainya Chopra (Rohan Chand). So unflappably jovial and desperate for a friend, this innocent young boy wedges himself into Guy’s carefully laid plans as a conduit to his own childhood. Rather than appeal to his sense of compassion and shut down his mysteriously ruthless game, however, Chaitianya instead gives him an outlet to have fun while biding time until the next day’s round of words. Guy takes the kid under his wing for debauchery, alcohol consumption, and thieving, always ensuring he’s back in bed to dream about the memories of their lewd activities, before sleeping with Jenny in the storage closet serving as his room next door.

Dodge’s script was an un-optioned Black List entry before Bateman attached himself to make it his first foray behind the camera. It’s a silly premise made bearable by its lead character literally having no compassionate bones in his body. Had it gone in the saccharine direction you’d assume it would the Toronto International Film Festival probably wouldn’t have screened it. No, letting Guy Trilby complete his plan, despite everything thrown his way, is Bad Words’ greatest strength; it allows the comedy to get more and more uncomfortably wrong with each passing day. He may have sympathy for these kids and even feel a tad remorseful about the lengths he goes to weed out the competition, but none of that is going to stop him from faking a pre-teen’s period with a ketchup packet.

The eventual reveal of why he’s doing everything injects a bit of the heart the rest of the film avoids, but not enough to derail the climactic circus that follows with Guy’s and Chaitainya’s friendship/rivalry coming to a head. Just when you think Dodge has finally succumbed to mainstream pressures, he subverts his sole noble act by making it a direct cause of more selfish chaos, devolving the Bee’s final round into petty violence and vindictive posturing. Chand holds his own opposite Bateman and steals much of the film with a deceptively ruthless cunning, hidden beneath the cutest, most innocent smile in the world. Their unlikely duo brings laughs first, a win at all costs attitude second, and the perfect smidge of genuine camaraderie to offset the non-stop, highly offensive behavior throughout.

Bad Words premiered at TIFF and will be released in 2014 by Focus Features. One can see our complete coverage by clicking below.