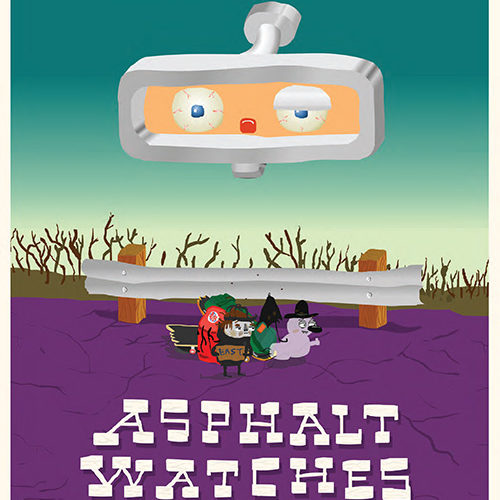 I’m not one to condone illicit drug use, but you might want to take something if it’s available before sitting down to watch Asphalt Watches, since its animated road trip plays out as though its creators were doing the same while producing it. Based on writers/directors Shayne Ehman and Seth Scriver‘s eight-day hitchhiking journey across Canada, everything you see really did happen. Rather than simply recount their adventure, however, they’ve decided to give each other cartoon avatars with which to engage the nightmarish menagerie of characters they’ve transformed into hideously odious amalgams of found objects and exaggerated features. Bizarre doesn’t begin to describe the end result and whatever it lacks in polish is surely made up for in sheer absurdity and outlandish style. Eight years drawing in Flash and an Indiegogo campaign later, their trek from Chilliwack, British Columbia through Calgary and into Nova Scotia is brought to life in crudely drawn, brightly colored figures that could only have been conjured from the twisted minds of internationally renowned visual artists. Not enough to simply create automobiles resembling gas pump nozzles or karaoke singing squids; a personal makeover is also performed so they may cohesively fit into this imaginatively filtered Canadian landscape as Bucktooth Cloud (Ehman) and Skeleton Hat (Scriver). The former is a translucent ghost-like blob floating around in a top hat while the latter is grey, solid, and fitted with the spinal vertebrate of what used to be a trapper cap.

Hoping to stowaway on a train for the long haul with an out-of-date How-to Manual as their guide, finding their entry point burned down leads them towards the highway with thumbs out. Well, that’s not entirely true since a road-killed dog raised from the dead as a wooden log actually suggests they hit the more heavily trafficked roads. There’s no better example to explain what I meant about being a little inebriated before settling in for this surrealist quest than that, especially after introductions to an ex-con, Wendy’s loving Santa Claus; a Pack Rat narcoleptic driving 30 on the expressway; a profanity-laced mother suffering from Tourette’s; and a trio of wasted idiots a few miles away from becoming nothing more than blood, guts, and metal to be scrapped up off the pavement. Add some excruciatingly slow and repetitive rap songs like “Come Over for Some Boiled Hot Dogs” and “Don’t Forget Your Boston Pizza”; a slew of hamburger imagery spanning blinking eyes, constellations, and the food; and carefully placed anecdotal text hidden amongst the jam-packed frames with contextual jokes to coax you back for a second visit to ensure you didn’t miss a trick. Nightmares become reality as crazy drivers ask the travelers about their worst fears and fantasies of spinning pottery wheels transform their orbs into moons in a way I just don’t think I could truly appreciate sober. In fact, despite all the insanity going on between kooky characters and visual overload, the whole endeavor drags along as though it’s five times its actual length. It’s a slow, methodical delivery I sadly couldn’t quite appreciate.

It’s too bad too because I can understand and relate to the tedium of working in Flash and willingly applaud Ehman and Scriver for having the focus and energy to make a 90-minute feature film with the medium. The amount of motion tweens necessary to render Asphalt Watches into a fluid story with details as small as putting Tim Horton’s logos on each brown coffee cup hurts my brain to even fathom. This is virtually a dead technology we’re talking about—a system of animation Apple still refuses to make available on their handheld devices. To stick with the format through eight long years during which they watched it all but disappear online after its transition from Macromedia to Adobe involves a Saint’s patience and should never be taken lightly. I only wish it didn’t hold on so tightly to its stoner aesthetic of laborious pacing and unintelligible abstractions. Memorable scenes such as a kindly gentleman with a knife in his gut asking whether anyone could take him to a hospital, domestic raves pulsating in a candy lollipop friend’s living room after spending the night babysitting her kid, or an old couple in an RV allowing them inside because of the “kindness in their eyes” are overshadowed by the off-kilter orchestration that would probably work better in smaller doses. Make these implausibly hilarious situations standalone as entries in a web series and you may have something palatable for a wider audience beyond the potential cult following of artsy types seeing through the artifice at its boldly dark commentary underlying every frame.

For the rest of us, however, it’s merely a charming novelty whose parts unfortunately possess more worth than the whole. I won’t be naïve in refusing to acknowledge that plenty of the jokes and grotesque caricatures probably went over my ignorant to the ways of the Great North American mind, but targeting such a finite audience only exacerbates its inherent problems. Asphalt Watches is a uniquely original piece of humorist satire depicting the horrors of an out-of-control consumerist public devoid of morality or consequence, but at when does the message no longer surpass the limitations of its delivery method? The one-note joke at its core is definitely relevant and worth telling, but it simply cannot prevail over the unavoidable monotony once the first couple skits effectively prove the point.