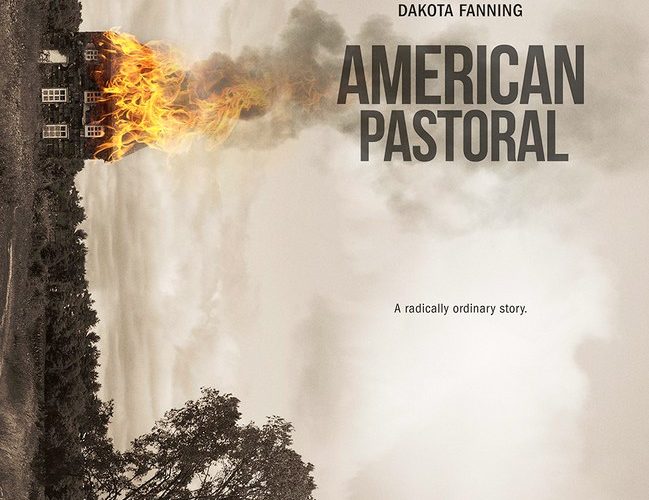 If my limited experience with Philip Roth adaptations is any indication, his novels deal in emotion. There are existential crises concerning identity involved, each a character study about life’s impact beyond the surface experiences propelling them forward. This isn’t something easily translated from page to screen when so much consists of internalized motivation. You must really look into the text, ignoring plot to find the core reactionary cause for everything occurring. If a daughter’s disappearance indelibly changes every second of her parents’ lives in the aftermath, we must see their psychology driving every move — not simply the over-the-top breakdowns shoving their turmoil in our faces. Success arrives in how powerful a pause between chaotic highs and lows proves. With American Pastoral, I only felt that power’s potential.

Many will place blame on Ewan McGregor simply because he may have been ill-prepared to handle such a dense work as his directorial debut. Fault should lie with him as captain, but besides an artificial, mannered feel throughout, my main issue concerns John Romano’s script being so intent on solving the central mystery of Mary’s (Dakota Fanning in adulthood) vanishing. It tells us her father (McGregor’s Seymour “Swede” Levov) breathlessly searches because he wouldn’t allow himself to forget his child. It constantly utilizes outsiders as vessels to worm their presumptions and prejudices into his mind with inevitable thoughts that he did something wrong. But it does these things so intentionally that I never felt Swede’s pain as much as the film’s assurance it exists.

His grief manifests more as curiosity and heroics — the same false sense of heroism that assisted in driving a wedge between his idea of fighting the good fight through middle class status and Mary’s yearning to walk the streets as a revolutionary preaching violence and hate as a way to end war. At times the film seems more anti-protest than the heart-wrenching display of psychological unrest it strives to become. McGregor’s Swede is painted as an amateur detective, seemingly unfazed by what’s happening to keep his head and advance. He dives in when a clue in the form of a fearless young woman (Valorie Curry’s Rita) presents herself. He doesn’t rattle when she preys on his Boy Scout persona, staying strong while his wife, Dawn (Jennifer Connelly), unravels.

But where that unravelling should reveal the suffering at hand, it merely gives Swede an opportunity to swoop in as savior. Rather than allow him to break down, too, he becomes the idyllic master of his universe everyone believed he was throughout life. This proves problematic as far as drama goes because it paints Mary’s decisions as a catalyst for mystery rather than the conversation about nature vs. nurture alluded to but never started. It also proves our bookended narration disingenuous, Nathan Zuckerman (David Strathairn), a sixty-year old ex-classmate discovering from Swede’s brother, Jerry Levov (Rupert Evans), that he passed away. Jerry says the war killed him, and he isn’t necessarily wrong. It’s just grossly misleading, considering his search hardly seems to be hurting him as much as everyone else.

Sadly, none are focused upon as much as Swede, his adventure less a failed existence than a distracted one. So much time skips that it appears he’s been hunting down Mary’s whereabouts every waking hour despite having gone back to work to sustain his father’s business to great success. He becomes consumed enough to be careless about not keeping the police aware of new leads, but not so much that he can’t quickly drop it to help Dawn’s oft-ignored wellbeing. Even that’s glossed over, though, her rejuvenation another new hiccup in Swede’s life to combat with grace or anger. It’s all so manipulative that the stakes play as though a game. You can say his emotions destroyed him, but, without onscreen evidence, it’s a hollow sentiment.

So what, then, is the point of this film? To see if Mary is found? That was (admittedly) my interest. I invested in the non-existent investigation, wondering whether Swede would be successful even after everyone else gave up. I was also still intrigued about how far he’d compromise his own convictions to find her despite him never showing any signs of doing so. I think I was simply desperate for something unexpected to happen. I wanted there to be meaning in Mary’s descent into violence, even if it meant revealing her to be some sort of mastermind who murdered as many people as soldiers died in Vietnam. There was an intensity in her rebellion against Mom and Dad that the film never matched again.

McGregor touches upon historical moments with archival footage that sometimes works and other times merely pads transitions, as though a cut to black wasn’t sufficient. Fanning’s angst is effective, Connelly’s mental crisis mostly authentic (a couple shrieks sound like laughter), and Peter Riegert’s Levov patriarch delivers much-needed comic relief in his ornery, set-in-his-ways Jewish businessman. The decision to put make-up on Evans for the bookends is misguided, since he’s acting against a guy who has no younger version; the Jainist principles entering in the eleventh hour appear false in their out-of-nowhere importance to a character’s life through clumsy epiphany. So much is thrown our way and yet I felt as if nothing possessed any real depth to grab me.

American Pastoral does succeed at making me want to read the book. The plot’s moving parts seek to mine the psychological machinations of parents trying their best and an alienated child rejecting every advantage, so Roth surely fulfilled this promise. I also have to believe Swede is more complicated than a man with a hero complex refusing his role in an event that shook their hometown. It hurts that Molly Parker’s Dr. Smith tells them early how his and Dawn’s looks and popularity were too daunting for young Mary to cope with because we know it’s true. From there, everything plays catch-up to reach a finale that isn’t nearly as impactful as the filmmakers hoped. A pervasively cheery disposition for most of the runtime renders gravitas impossible.

American Pastoral is currently playing at the Toronto International Film Festival and opens on October 21.