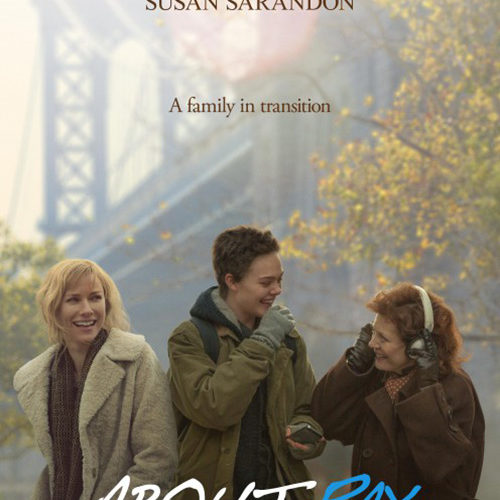 I hate to be the guy to judge a book by its cover, but I admittedly did just that with Gaby Dellal‘s 3 Generations. It depicts the “unconventional” family of three generations with Susan Sarandon‘s Dodo, Naomi Watts as her daughter Maggie, and Elle Fanning‘s transitioning grandson/son respectfully named Ray (formerly Ramona). The artwork is mediocrely mainstream with smiling faces projecting this difficult period in their lives as though a cakewalk the experience never could prove under any circumstances. I expected an everyone-supports-Ray fluff piece and was therefore pleasantly surprised Dellal and cowriter Nikole Beckwith instead delivered an authentic familial drama that’s universal no matter its wild relationship machinations.

Audiences may struggle with this last point because this family is flypaper for the “unorthodox.” It’s almost as though the filmmakers decided to throw the kitchen sink against the camera so nothing could be singled out as unpalatable or unimportant. There’s the boy born in a girl’s body desperately seeking to finally rid himself of his vagina and start anew, the single mom barely holding on as she reconciles maternal instinct and fear, lesbian grandmothers with Linda Emond’s Honey as Dodo’s long-term girlfriend a permanent fixture, the estranged father (Tate Donovan‘s Craig) whose abandonment is a point of contention, and one more surprise to render everything more innocuous by comparison. Because nothing is “normal,” we can focus on the human element rather than the social.

And this is what we should be doing in a perfect world anyway, but Dellal isn’t deluded in thinking that’s where her film is being shown. We live in a time where the simple fact 3 Generations concerns gender dysphoria makes it rejected sight unseen by much of the population. It’s that cross-section that needs to see it, though, to witness an empathetic view of the struggle endured by the transitioning character’s support group too. Ray’s journey isn’t all roses and even Sarandon has trouble wrapping her head around what her granddaughter is doing. Lines like, “Why can’t she just be a lesbian?” ask what many people want to and the answer explaining how she isn’t a lesbian, but a heterosexual male puts the truth as blunt as possible.

They also infuse the film with an effective humor such as when Sarandon explains how sleeping with a woman doesn’t make her open-minded, it just makes her happy. It’s a profound nugget that resonates as much as entertains because it humanizes her for those who refuse to consider homosexuals human. The fact that much of the movie focuses on Watts’ Maggie’s struggle to confront Craig after not contacting him for ten years does this too. It shows how it’s okay to sympathize for those morality portends should blindly give compassion to the oppressed and victimized. Maggie is an inspiration, a woman who has allowed love to trump discomfort because she knows her reaction carries immense weight. But she isn’t perfect.

Dellal and Beckwith take specific care in writing their pronouns because the way characters describe Ray is crucial to understanding their position beyond surface acceptance. Maggie is the only one who says “he” as a rule—besides the corner deli owner allowing Ray’s “little man” to use his bathroom during school hours—yet even she slips when emotions run high and the toll of her position threatens to break her in two. There’s an authenticity to this slip that proves how effective the film is at showcasing the experience’s honesty. Even the person who corrects everyone else and vehemently protects her son as a result isn’t one hundred percent certain with Ray’s decision. As an outsider looking in, though, Fanning’s performance proves she should.

To write about exchanges like Donovan’s Craig defending a stance to not let his daughter go through with the process by saying, “What if she changes her mind?” to which Watts’ Maggie responds, “What if he commits suicide?” is to see how they could be vomit-inducing if utilized in the wrong way. How they’re built and how the actors deliver them, though, renders each one a light bulb moment of comprehension instead. Maybe I was just in the right mind frame to accept it as such, but hearing both sides of the argument and listening to the battle necessary to change someone’s entire belief structure made me think 3 Generations could be a revelatory experience to help bridge the gap between parents and children coping with similar circumstances.

None of the external dark corners are shied from either as a sequence of bigoted abuse by a local kid against Ray, leaving him with a black eye, unfolds with razorblade precision. His despair at thinking classmates have finally accepted him as a boy before calling “her” brave is devastating and the potential that he’ll have to endure more torture at the hands of people who originally met him as a girl is too much to bear. Fanning’s anger is heartbreaking and her ability to focus it when Ray decides to confront his father personally is moving. Her performance is what you’d expect and the character is too—strong, dedicated, and on the cusp of hopelessness. It’s because of this that Watts actually shines brighter.

This is in part because she’s my entry point. I can’t know what it feels like to be trapped beneath the wrong gender, but I can know loving someone who is. Maggie has a journey of her own and it isn’t belittling Ray’s to say it’s just as important. Why she finds it hard to talk to Craig has hidden reasoning that threatens to lessen effective scenes occurring before the reveal, but the fact she does so anyway is the point. She will fight tooth and nail for her child’s happiness whether against a stranger of her own mother. It’s her unwavering love and the love of others helping them find their own clarity that Dellal showcases. Life is difficult and funny—we can all relate to that.

3 Generations premiered at TIFF and will be released on May 5, 2017.