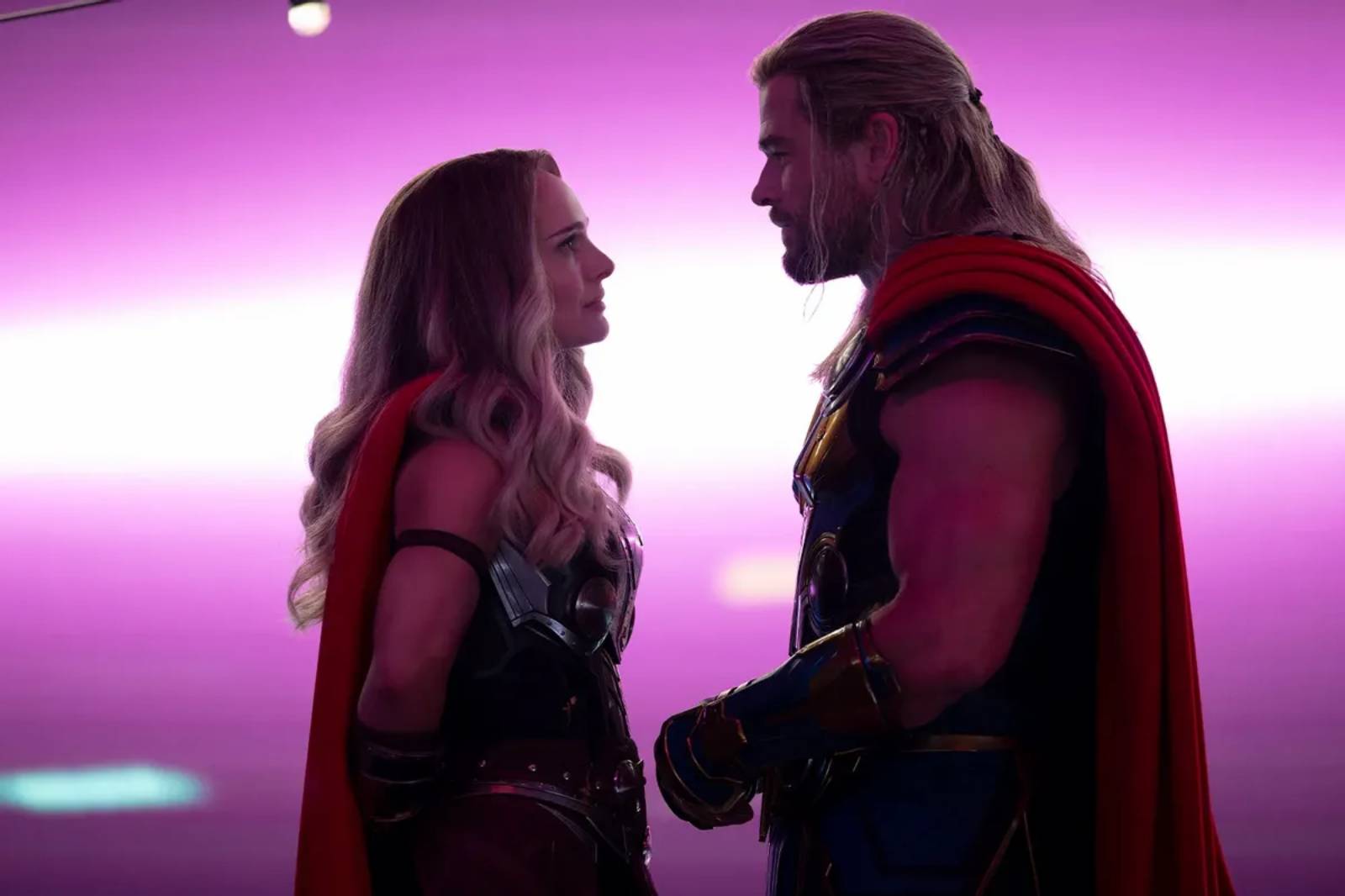 Last year, in an article for Blood Knife, R.S. Benedict diagnosed a central issue plaguing most modern action movies: “Everyone is beautiful. And yet, no one is horny.” Over the last 15 years, the Marvel Cinematic Universe has practically inspired that thesis, supplying its superhero spectacles with chiseled figures and tight-fitting body suits and, most notably, very little libido. In line with its output of increasingly sterile apocalyptic sequences, the Disney-run studio has diluted sexual attraction to the point that, as Benedict writes, “Chris Hemsworth’s Thor smiles at Natalie Portman like a dumb golden retriever puppy without ever venturing to rend her asunder with his mighty hammer, so to speak.”

In Thor: Love and Thunder, the fourth movie dedicated to the blonde and beautiful Norse god, director Taika Waititi tries his best to resist those canine qualities from slobbering over his PG-13 rating. As proof, Thor’s ex-girlfriend, astrophysicist Dr. Jane Foster (Portman), returns to the franchise with a new, electrified look; there’s discussion about orgies and Kronan lovemaking; and at one point Thor is stripped naked in front of several gawking sirens. Still, cracking the MCU’s algorithmic chastity belt requires more than explicit conversation and hijinks. You need real, sexual chemistry—like the kind exhibited between Thor and Stormbreaker, his enchanted ax. Unsurprisingly this has turned out the most convincing love interest of the entire series.

To be fair, it’s been “eight years, seven months, and six days” since Jane’s departure, so the thunder god has grown quite attached to his magical blade throughout his joint adventures with the Guardians of the Galaxy. In case you’d forgotten, Thor’s sidekick Korg (Waititi) synopsizes his previous travels and developments campfire-style, recapping the last decade much like a YouTuber explaining a Marvel movie—over a series of flashbacks, he details overly familiar battles, covers the fallout of 2017’s Thor: Ragnarok, and eventually highlights previously unseen footage from Thor and Jane’s domestic relationship. It’s just the beginning of a script, written by Waititi and Jennifer Laytin Robinson, burdened by exposition and mythological-speak.

As a way to protect his heart, Thor has kept everyone around him at arm’s length, dressing like a monk and only exposing his red cape and lightning bolts when needed. This occurs early into Love and Thunder, when, in the midst of some trench warfare on a distant planet, he helps out his intergalactic friends by unleashing his ax against some deranged owl-like creatures. Like his last entry, Waititi seems to have the most fun concocting other-worldly, kaleidoscopic landscapes and slow-motion dioramas set to overplayed classic rock anthems (this time, Guns N’ Roses makes up the majority of his greatest-hits soundtrack). It’s a much grimmer affair on Earth, where Jane is battling Stage 4 cancer, a reality that prompts her to visit New Asgard—now an indistinct fishing village run by King Valkyrie (Tessa Thompson)—in hopes of a cure and potential reunion with Thor.

Every one of these movies needs a villain; Christian Bale obliges as Gorr, affectionately known as the “god butcher.” Infected by a diabolical sword, Gorr has simultaneously begun a killing spree throughout the realms to avenge his deceased daughter, promising each god’s destruction after his own betrayed him. That means a showdown in New Asgard, where Jane has coaxed Thor’s power by repairing his splintered Mjolnir. The unwieldy hammer gives her health and super-strength—along with a cape, helmet, and blonde highlights—but it also expedites the cancer whenever she returns to her corporeal form. Just in time, Jane arrives to fight off Gorr and his shadow creatures, surprising Thor and Valkyrie. Forming a new triumvirate of fighters, Portman appears to relish her chance to do more than just run and hide from danger, and together they spend the rest of the movie figuring out a way to save the dozens of Asgardian children that Gorr has kidnapped and caged on a gray-scaled planet.

It’s not as complex as it all sounds, but it’s a lot to juggle, and Waititi struggles to keep everything in the air. The movie wants to hitch its emotional core to Thor and Jane—it provides a window into their blossoming courtship and withering breakup, and its road-trip conventions allow them to reconsider their relationship’s past and future. In the process it sidelines Valkyrie, whose one brief scene with Jane features a bonding session over a Mary J. Blige song, a moment more enjoyable than anything that’s been rekindling with Thor. That’s not a knock on Hemsworth, who never fails to exude his baritone-voiced charm, as much as it’s a credit to Thompson in an underused role. A more intriguing movie with less to accomplish might have given this “rom-com” a love triangle with some actual sexual tension. Instead the only time jealousy—and humor—emerges is when Stormbreaker senses Thor pivoting his allegiance back to Mjolnir.

Much as Waititi has injected his own quirky brand of color and style into the MCU, here his levity often grows stale and overbearing. That’s most evident in a second-act detour that visits Zeus (Russell Crowe, weirder than ever), whose empty and infantile outbursts—producing a dragged-out and mostly pointless scene—only seem to have merit in setting up another sequel. It’s not long before the quirks so essential to Waititi’s ethos come off as sidetracking gimmicks. For every visual gag that works (New Asgard boasts a Thanos-inspired ice-cream stand called “Infinity Cones”) it double dips with repeated jokes that lose their punch in the same way its CGI battlescapes feel weightless and inconsequential, or villainous manifestos have little bite or menace.

Not that Bale isn’t chewing up the page. Much like Cate Blanchett’s theatrical, near-camp performance in Ragnarok, Bale takes full advantage of his turn in the Marvel juggernaut—looking, hissing, moving like Ralph Fiennes’s Voldemort while gurgling a dark goo in the same style as Danny Devito’s Penguin. Though Gorr has little purpose beyond giving Thor a formidable and maniacal obstacle to overcome, you can see the loose thread this movie tries tying between his sword and Jane’s hammer. The weapons act like kryptonite even as they promise a temporary invincibility—an intriguing ethical quandary undercut by the preaching of Asgardian values, which only seem to reinforce the godliness of militarism.

This is of course to be expected from Marvel, which in its latest phase has increasingly felt more like a corporate content dump à la Disney’s latest Star Wars series Obi-Wan Kenobi. Sans some overarching Avengers narrative providing these standalone epics their thrust, Thor: Love and Thunder plays adrift and uneven, once again resistant to use its untethered narrative and leading hunk in any meaningful—meaningfully sexy—way. By film’s end, when one character tells another to “choose love,” I could hear a handful in my theater beginning to sniffle and cry. It’s hard to understand why. The only thing my eyes could do was roll.