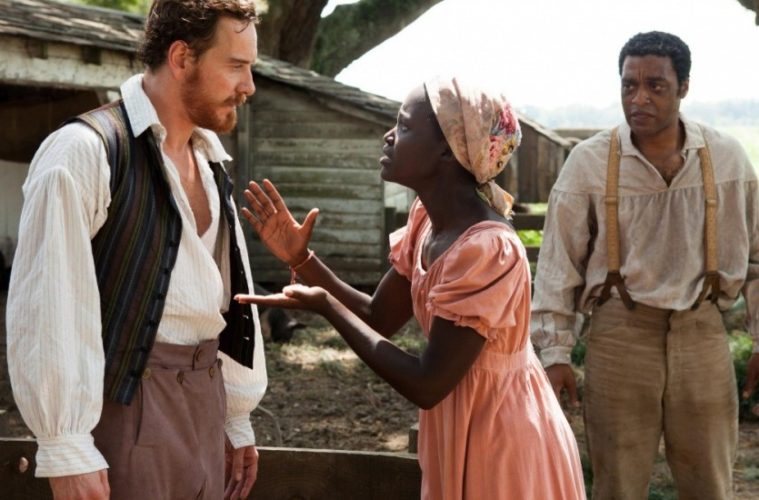 During last night’s Breaking Bad commercials, I made the mistake of briefly flipping over to the VMAs, just to see what sort of atrocity was occurring at the time. My worst fears were all confirmed, but I seemed to miss perhaps (nay, easily) the most notable aspect of the “ceremony,” as none other than Shame and Hunger director Steven McQueen was featured.

While he didn’t stop by the disaster himself, when Kanye West took the stage to perform a truncated version of Blood on the Leaves, from his most recent album Yeezus, a striking piece of art was placed behind his silhouetted figure. It turns out it was actually “Lynching Tree,” a photo from McQueen taken near New Orleans likely during production of his latest film, capturing what “served as a gallows for slaves, and buried near underneath it are lynched victims.” As we gear up for the premiere of the film at TIFF, check out Kanye’s performance, a statement from The Schaulager museum regarding the piece, and a still of the art below.

Steve McQueen’s most recent work, “Lynching Tree” (2013), created especially for the exhibition in Basel, pictures a site that testifies to an odious past. It shows a tree near New Orleans that once served as a gallows for slaves. The ground around the tree is filled with the graves of the lynched victims. This work is related to the artist’s latest film production, “Twelve Years a Slave,” scheduled for release in movie theaters this fall. As in his video and film installations, McQueen’s camerawork in his feature films distills narrative sequences into individual images of overpowering intensity. Conversely, “Lynching Tree” is a photographic still that eloquently renders an entire narrative. McQueen’s film is based on a true story told in the eponymous book by Solomon Northup, a free-born citizen of New York, who was kidnapped in 1841 because of his skin color and eventually sold into slavery at a cotton plantation in Louisiana. After twelve years of forced labor and physical abuse, he regained his freedom by legal decree and was reunited with his family. Obviously, “Lynching Tree” does not depict this, but knowledge of it opens a curtain to reveal the inconceivable, inscrutable context underlying an image that seems so unprepossessing at first sight. 12 Years a Slave premieres at TIFF and opens on October 18th.