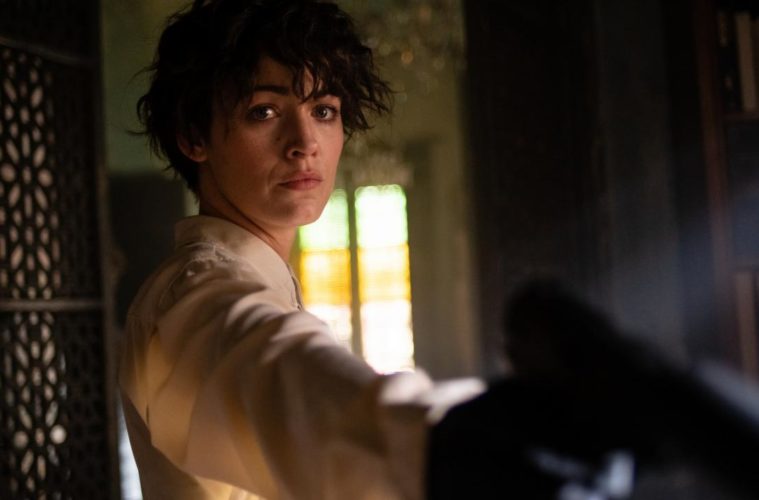 Notoriously masculine and unwelcoming, the realm of American action cinema as a genre often refuses to give female characters the same agency as their male counterparts. Women’s bodies are typically introduced to absorb brutality and sexual energy rather than exert any kind of physical power or agility. One of the few recent examples to upend these constructs, Steven Soderbergh’s Haywire subverts the gender hierarchy of action kinetics by giving Gina Carano’s formidable operative Mallory Kane space and opportunity to fully express herself violently, a motif critic Kiva Reardon brilliantly explores in her 2013 essay “Haywire’s Body Talk” published at cléo.

I thought of Haywire often while watching Reed Morano’s clunky but fascinating new bruiser The Rhythm Section. It stars Blake Lively as Stephanie Patrick, a traumatized young British woman made weak by addiction who finds purpose in pursuit of revenge. Along the course of her rage-fueled journey tracking an Islamic extremist, Stephanie encounters multiple older professionals who are supposed to function as mentors. Instead of depicting these relationships as fulfilling or inspirational, Morano focuses on how each embodies the very misogyny that denies complex female perspectives within the genre itself.

The film aligns Stephanie’s point-of-view with an overt first-person style. Such an aesthetic gives her hazy memories of better times a confrontational feeling, while scenes set in present-day London lack spatial equilibrium. Morano’s approach makes sure audiences know that Stephanie will always be the conductor of this particular symphony, even during particularly volatile moments when the strong rip current of convoluted cat-and-mouse intrigue seems destined to pull her under.

Lively made her first splash as an actor playing the posh bombshell Serena van der Woodsen on Gossip Girl. But in recent years she’s made it a purpose to choose far more complicated roles that fixate on how the female body reacts under extreme stress. In this sense, The Rhythm Section picks up the thematic baton from Jaume Collet-Serra and Lively’s thrilling shark movie The Shallows, an admittedly far superior work of aesthetic bravery and fluidity.

The overall redemption arc in Morano’s film initially appears quite familiar. Stephanie has repressed the extreme guilt felt from losing her family in jetliner disaster by becoming a sex worker and junkie. Only when an investigative reporter informs her that the plane crash was not an accident but an act of terrorism does she venture out into the underworld for answers. There she encounters a series of male gatekeepers who try to shape both her potential and progress as a skilled killer, including an ex-MI6 agent named Boyd (Jude Law) exiled in the Scottish highlands.

Despite agreeing to train Stephanie as his protégée, Boyd consistently tries to temper her expectations nonetheless. “You’re not made for this,” he affirms early on. What he’s really saying is she’s not made for a professional world dominated by pinpoint tradecraft and hand-to-hand combat. While never entirely coherent, The Rhythm Section relentlessly seeks to prove Boyd’s assertion wrong, that Stephanie is not only made for this, but deserves to experience it on her own terms. This motif really comes to the forefront during a crushing and intimate melee between the two characters inside Boyd’s rustic kitchen. There are no stunt doubles or edits to hide behind, just a messy long take where two traditionally glamorous actors go for each other’s jugular.

Morano’s action direction is never less than thrilling, and a booming car chase through the streets of Tangiers remains one of the film’s high points. Its chaos mirrors Stephanie’s own uncoordinated introduction to the spy world. But at other junctures, Morano often seems unable to wrangle Mark Burnell’s overly convoluted script, which is based on the novel in his series about his literary heroine’s vengeful globetrotting.

The tired narrative double crosses and verbose exposition ultimately distract from the film’s artistic desire to complicate the female gaze within action cinema. Thankfully, Lively’s persistent, elusive performance never truly loses sight of that goal. “I’m not looking to get healed,” Stephanie defiantly says. By The Rhythm Section’s stirring last scene, the thought that any man could dictate terms with her has been squarely put to rest.