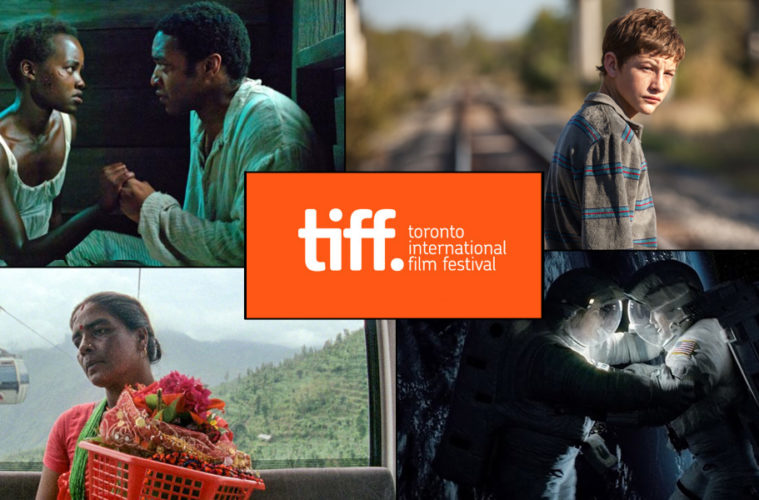 With around 70 reviews of Toronto International Film Festival 2013 titles already published (not counting our comprehensive look at the short film program), we’ll have a few more trickling in over the next few days, but today it’s time wrap up our experience. After Canada’s finest cinema event shared their prize winners — including our full agreement on their top choice — there were also many other great discoveries to be had. We’ve rounded up our top ten films, followed by a list of complete coverage, and stay tuned over the next months (and years) as we bring updates on features as they make their way to screens. One can also click here for a link to all of our coverage, including news, trailers, reviews and more.

As the end credits rolled during TIFF’s first press and industry screening of Steve McQueen’s 12 Years a Slave, a peculiar thing occurred: very few people moved. Some quickly sprinted down the stairs, hurrying for their next screening, but many, like yours truly, just sat and stared, feeling emotionally overwhelmed by the experience. The film is that kind of success, a stunningly realized achievement that will clearly rank among the finest — if not the finest — films of 2013. McQueen, the British helmer behind Hunger and Shame, has brought America’s most shameful period to the screen with a fury and authenticity the likes of which audiences have never seen. – Christopher S. Rather than show us another bloody WWII massacre, writer/director Aaron Wilsondecides to breathe fresh air into the war drama with the virtually non-verbal Canopy. Inspired by first-hand accounts heard from veterans of Australian, Singaporean, and Japanese descent throughout his life, the goal of this feature length debut was to get at the heart of conflict and portray the tiniest sliver of humanity breaking through the wasteland of senseless slaughter. It’s an authentic depiction of what it means to be caught behind enemy lines without a language, sense of direction, or better than slim odds of escaping with life still flowing by the end. It’s about the connections we make and the brief moments of respite to remember what it is the fighting is all about. – Jared M.

How do you stretch having thirty days left to live into seven years? You put in the work. Ron Woodroff (Matthew McConaughey) didn’t journey towards opening up the Dallas Buyers Clubin order to stage a revolution against the FDA — he simply sought to prolong his own life. DirectorJean-Marc Vallée’s film depicts this evolution as Woodruff’s homophobic cowboy becomes a champion of the LGBT community and a leader in the fight against government AIDS profiteering. It’s a story twenty years in the making as screenwriter Craig Borten met with the real Woodruff a month before his death in 1992, enlisted Melisa Wallack’s help to rework his script in 2000, and finally saw its debut at the 2013 Toronto International Film Festival. And it proves much more than a vehicle for the headline grabbing weight loss of its stars. – Jared M. The Finishers is a wonderful, crowd-pleasing tearjerker from director Nils Tavernier, inspired by the real-life Hoyt family from Holland, MA. Fabien Héraud stars as Julien, a 17-year-old with congenital palsy who has a poignant sense of humor, including playing with his fellow wheelchair-bound friends and kidding around with his mother Claire (Alexandra Lamy). His father, an athletic contract repairman who repairs ski-lifts in the summer, Paul (Jacques Gamblin), finds himself unemployed. Always on the road with little to no time to bond, Julien wishes to spend time with his father. – John F.

Back in the ’90s, at the advent of IMAX technology, certain amusement parks would have a screen with some “experience” putting you “into the action.” Enter the 21st century, and director Alfonso Cuarón has made one of these with Gravity. While I admit such a description may seem like I’m putting the film in a bad light — simplifying it to the basest aesthetic traits — I honestly mean it as a compliment. Space has always been one place to which only a select few could boldly go; in this exhilarating look at its vast, empty expanse we truly get a sense of how beautiful and terrifying it truly is. – Jared M.

While it often feels like a brother to Jeff Nichols‘ brilliant Mud, David Gordon Green‘s newest drama Joe even has the same young actor supporting his titular lead: Tye Sheridan, who either has the greatest agent in the world or, simply, possesses the kind of ingrained encyclopedic knowledge and love for the art form that someone like Paul Thomas Anderson had at the same young age. His résumé may not contain a whole lot of diversity, what with its three country boys growing up the subject of abuse — Terrence Malick‘s The Tree of Life rounding out that trio — but he knows emotional stoicism and unwavering moral centers in a way most adult actors can’t wrap their heads around. He embodies the hardworking boy-who-could-kick-your-butt image perfectly while, too, giving us a troubled soul in desperate need of our compassion and empathy. – Jared M.

If anyone asked if Jason Reitman was truly a great director or, rather, someone with excellent luck in choosing projects — I remember thinking his Best Director nod for Juno was premature, myself — Labor Day should set the record straight. This is very much a different beast than his previous works, pushing comedy to the side for poignant drama and a surprising romance formed in the face of an impossibly difficult situation. He consistently gets stellar performances from a lineup, has an impeccable rhythm when pacing stories, and, no less, finds a way to make even the most contrived situations drip with authenticity. – Jared M.

Stephanie Spray and Pacho Velez’s Manakamana, the latest work from the Sensory Ethnography Lab at Harvard — most recently behind Leviathan, a TIFF entry last year — is a spellbinding work of humanist cinema, and a rigorous experimental documentary that allows its viewers to breathe inside a unique landscape resting somewhere between nature and technology. If Leviathan did everything in its power to bring us light years from a human experience of the world, Manakamana is our species at its most intimate. The passengers “act” to a stationary camera, which observes their interactions directly, cogently, and, often, delightfully. It’s a tightrope act — in many ways, far more carefully parsed together than the looser structure of Leviathan — but Spray and Velez conceive a travelogue in the vein of Abbas Kiarostami and avant-garde artist James Benning, one which, through its execution, perhaps solidifies the Lab as the most important vanguard trailblazers in contemporary cinema. – Peter L.

Prisoners might be the most shockingly dark studio release since Fight Club, a grim, unsettling, occasionally convoluted, but undeniably gripping thriller. The nightmare America of Denis Villeneuve’s film is sadly believable, and it results in a truly moving experience — one that audiences might not see coming. On paper, after all, this Hugh Jackman-Jake Gyllenhaal-starrer looked like just another procedural, a (possible) turkey jammed full of movie-of-the-week stuffing. The trailers were not particularly memorable, the likable Jackman and Gyllenhaal do not always choose their roles wisely, screenwriter Aaron Guzikowski’s only previously filmed screenplay was for Contraband, and even though Villeneuve directed the Oscar-nominated Incendies, he is still a relatively unproven commodity. – Christopher S. Even the most thorough textual illustration of Taiwanese helmer Tsai Ming-liang’s newest feature — by his own account, the final of a career that’s lasted more than twenty years — would fail to capture what makes it such a formally monumental, intellectually brutalizing achievement, and by any reasonable stretch among the finest works released in 2013. While Tsai drives forward with a plot which, in relative terms, could be traced in a “point A to point B” manner, Stray Dogs’ path towards the realization of both its narrative and emotional significance come, to a seemingly willing extent, at the price of complete and total coherence. It’s not merely the film’s slipperiness in establishing a clear-cut identity for its several protagonists, but the exact incentive behind each scene’s placement in the structure; questions of how the incident at hand may or may not relate to what one has just witnessed (or what will soon follow) will, sometimes, remain unanswered for as much as an hour — all while, regardless of expectation, other developments proceed. – Nick N.

(click for full review where available, including films screened at previous festivals)

What TIFF films are you most looking forward to seeing?