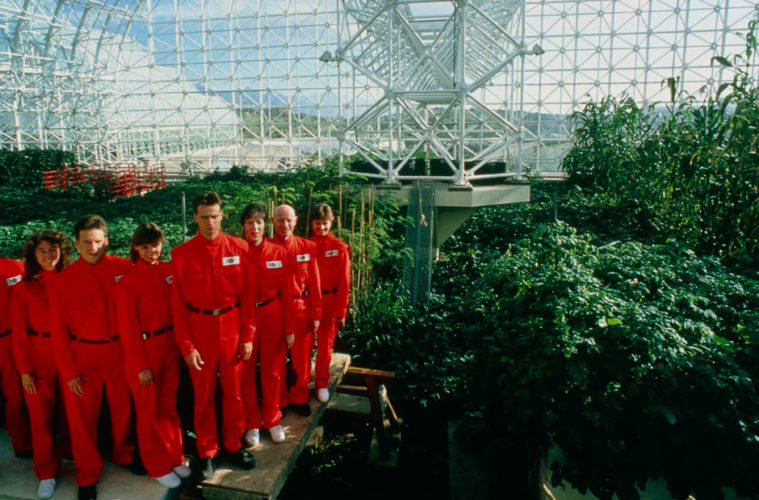 If the Earth was no longer inhabitable, could we survive inside a self-sustaining biodome environment launched into space? From Silent Running to Elysium, the question is the fodder for many a sci-fi film but in 1991, an eight-person group of men and women embarked on a two-year experiment to actually put this theory to the test. What followed was equal parts inspiring and frustrating as the duplicitous crossroads of innovation and capitalism converged. Spaceship Earth comes nearly three decades after the experiment, as the devastating effects of climate change and humanity’s continued destruction of the place we all call home only continue to grow more apparent, unfortunately making it the ideal time to revisit this story. Equipped with hours upon hours of archival footage thanks to the diligent work of those involved in the experiment, director Matt Wolf goes beat-by-beat not only through the media sensation of the project, but the quarter-century foundation that led to it. The resulting documentary makes for a fascinating story full of twists yet one that could’ve used some more invention and focus in the ways in which this sprawling journey is told.

Like most experiments with an eye towards space, one may assume the early iterations of such a project was the work of numerous high-level scientists and engineers, but Spaceship Earth sets up early on the improbable group that would be the foundation for this $200 million project. Meeting in the hippie heyday of the counterculture movement in the late 1960s and early 1970s, a rag-tag group of free thinkers were brought together under the goal of making the Earth a more sustainable place through both performance art and tangible projects, ranging from a rainforest in Puerto Rico to an art gallery in London to a hand-built boat large enough to travel to every continent. While much of the rest of the world got high and enjoyed the culture of the time, this avant-garde group was guided by a mysterious, but brilliant man some years their elder that shared a mutual passion: John P. Allen. After being part of the US Army Corps and receiving an MBA at Harvard, the charismatic drifter was a father figure to some as they created a globe-charting, make-shift family and, in the case of two women, he became a romantic partner, eventually marrying one. The cult-like signs of unwavering adoration from his followers and pushing forward his vision of the world get briefly addressed in the film. One member amusingly ponders that we as a society are hard-wired to form cults and wonders if there is a group of innovators who didn’t have such a driven leader and those that follow.

Accompanying the vast amount of archival footage is new interviews with the Biosphere 2 crew and those involved with their mission. While a few members are keen to tell the story in detail–and do so in highly entertaining fashion–it’s clear that the ringleader John Allen, aside from a few quips, has much less to say. The director’s decision to build up his cult-like persona without providing many answers is one of the frustrating aspects of the film, which can feel scattered as begins with an hour’s worth of backstory, before detailing the experiment itself. By the end, when a fairly big twist occurs and a regrettably recognizable face appears (a surprise those who weren’t paying attention in the ‘90s), it feels like there was enough material to warrant a limited series rather than trying to pack everything into a two-hour runtime. Capped off with a brief coda meant to provide a heartfelt surprise, the section instead comes off like a footnote that could have used even more exploration.

Nonetheless, there is no shortage of fascinating ideas bandied about. As one crew member says, by putting resources towards research about colonies in space that could carry on life, it directly results in generating ideas to make the planet we already call home more sustainable. Throughout the process, questions of the proper scientific process crop up–intensified amidst the media sensation the experiment caused–as the group was self-contained but not exactly self-sustained. Yet even with some setbacks, the experiment exhibited to the world that through hard work and collaboration not only with each other, but nature itself, a healing process for the planet is possible. In this way, it’s also a perfect comparison piece to last year’s beautiful documentary The Biggest Little Farm, which showed the work required to create a human-guided, nature-driven self-sustaining utopia.

Another theme warranting exploration in vigorous detail is the capital required to fund such massive projects to better the Earth. In the first half, as we learn of the group’s globe-trotting missions of goodwill, the inner voice in one’s head will be shouting: how did they get enough resources to build an entire boat then travel the entire world? And just when you think it won’t be covered, Matt Wolf provides the answer, one that’s a two-headed beast as the demons of capitalism eventually cause irrevocable damage, shaking the very foundation of the group themselves, as well the invaluable data they’ve collected. As an aforementioned familiar face pops up, it’s another story thread certainly worthy of its own documentary as the questions it raises about money, power, and control are as compelling as they are terrifying.

The two-year experiment in creating a mini garden of Eden was named Biosphere 2 because the first one is Earth itself, which, of course, should be our main priority to keep healthy. In the thirty or so years since, the evidence is everywhere of how bad of a job we’ve done. During a superb needle drop in the documentary, David Byrne sings, “Home is where I want to be.” Biting off more than it can chew, Spaceship Eart may not be wholly satisfying in its structure, but its plea for humanity to focus its attention on our home and how it can be remedied before it’s too late is a vital message.