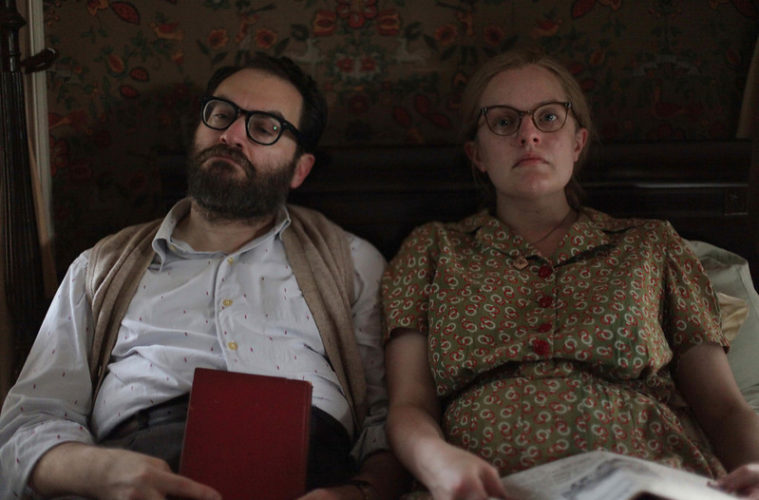 After getting attention on the festival circuit with her back-to-back first features Thou Wast Mild and Lovely and Butter on the Latch, director Josephine Decker deservedly expanded her audience with Madeline’s Madeline, a genuinely thrilling, endlessly imaginative look at the creative process as well as how mental illness influences artistic expression. With Shirley, she returns to similar themes in an entirely different era while continuing the same inventive, breathless style, even if this time around the narrative arc is a bit more straightforward.

Shirley Hardie Jackson was a deeply influential American writer who penned a handful of novels and hundreds of short stories. She was also intensely reclusive, had bouts of depression, and had to contend with her unfaithful professor husband. As Decker revealed in the introduction at the Sundance premiere, her early 1950s-set film is inspired by the author’s life but is purely fictional, based on Susan Scarf Merrell’s novel of the same name and adapted by Sarah Gubbins.

Further proving to be the pre-eminent actress at conveying instability and mania in independent cinema today, Elisabeth Moss portrays the author with a delirious yet reserved exasperation when she’s around others, and a chilly cool when she’s isolated–as she often is. Shirley doesn’t want anyone to prod her about the status of her latest writing, much less read it. This is despite insistence to critique said work by her husband Stanley Edgar Hyman. Played by Michael Stuhlbarg, he may be typecast in full Sami Perlman mode, but excels so thoroughly in the astute, genial professor role that he could endlessly mine similar territory and deliver the goods.

Shirley’s way of life gets more complicated and complex when Stanley invites his new teaching assistant Fred (Logan Lerman, who feels in place in this era after Indignation) and his pregnant wife Rose (Odessa Young) to live with them in their Bennington, Vermont home for free with only one favor: that Rose look after his unstable wife. “A clean house is a sign of mental inferiority,” Shirley says to her husband as she refuses to do the chores of the house, leaving them for Rose. Much of film unfolds like a play, with dinner conversations that are more entertaining to us than the characters as Shirley gets devilish enjoyment in making her new guests uncomfortable. As the weeks pass and Fred gets more involved with work, amongst other things, and Rose and Shirley spend more time together, their bond evolves in captivating ways that are out of step for a time period of female repression when it comes to both liberations of all varieties. Despite what the title may have one believe, the film’s perspective is actually tied with Rose, and Odessa Young’s wide-eyed transformation into what she thought she’d never become is fascinating to watch unfold.

Cinematographer Sturla Brandth Grøvlen (who also has Wendy at Sundance) carries Decker’s signature style of a constantly roving camera that retains a shallow focus as it brushes across the environment and our characters. The pent-up eroticism and tactile sensuality are felt in the way the camera always acts like it’s part of a tantalizing dance with whoever happens to be in the frame. Decker even evokes some nightmarish dream sequences including a frustrated Shirley isolated outside, yet with her full desk of reading and writing materials as she throws them off the edge. The sound design is also fantastic as the creaking house becomes another character in the movie, trapping Rose and Shirley inside its walls as Tamar-kali’s frenzied score adds to the nervous anxiety of sexual awakening and creative freedom.

In exploring themes of womanhood, marriage, and the creative process, Shirley covers similar ground as other works of art depicting this era of old-fashioned American repression, which makes it more palatable to a wider audience than her last feature and certainly not as surprising. Where Decker’s film excels is in the innovative perspective brought to each moment and the talented ensemble that gets to grab ahold of the material. Elisabeth Moss and Michael Stuhlbarg are having so much scenery-chewing fun they practically end up swallowing the single location.