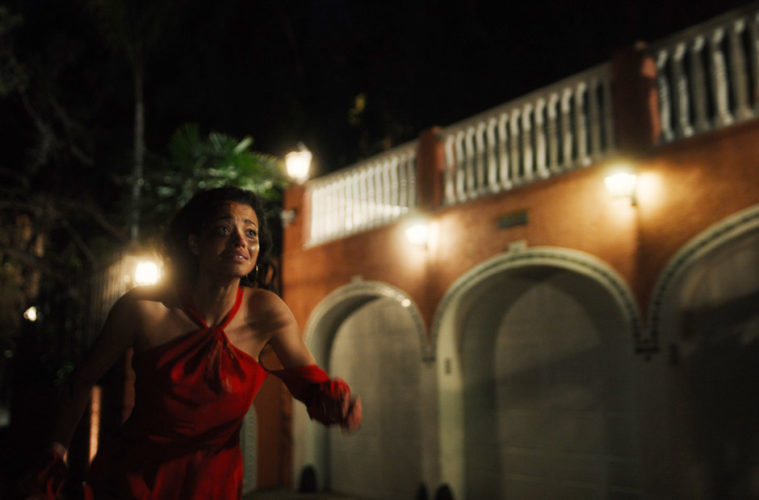 For a good chunk of its opening, Run Sweetheart Run establishes its main protagonist with a montage. Cherie (Ella Balinska) is in the bathroom getting ready for her day, and when she realizes that she needs a tampon, she looks up to see her daughter playing with one. It turns out to the last one she has, but alas, the toddler drops it in the toilet. Now she’s on a mom on her period that has no tampons and she’s stressed about her date tonight.

It might sound bizarre to bring this up first, but it’s necessary when discussing Shana Feste’s latest film. Well, necessary in the relative sense—very little here ends up necessary. One of the major issues isn’t the central conceit (which is fun) or even what it’s trying to deal with (which is essential). It’s that Run Sweetheart Run tries to be a feminist horror movie while focusing on a wholly uninteresting protagonist whose most defining traits are, yes, her maternity and her menstrual cycle.

Opening with a bunch of upskirt shots—ostensibly to skewer the male gaze despite the camera remaining entirely objective throughout—Feste’s movie then introduces Cherie’s daily life. She has a nondescript desk job and takes care of her kid. She’s getting ready for a date that her boss (Clark Gregg) set her up on, and getting to his house, she meets the lucky man. Meet Ethan (Pilou Asbæk), a Handsome Movie Character who seems like just the right guy. After their restaurant date, he invites her home for a nightcap, at which point she emerges from the house with a gash on her forehead and a target on her back.

It’s a solid premise that allows for a certain camp influence in addition to its commentary on rape culture, but there’s nothing here: no consistency, no integrity in regards to tone or construction. Feste’s script does nothing to establish its world. While first appearing to be tethered to reality, Run Sweetheart Run soon recontextualizes itself as supernatural without telegraphing or even justifying its decisions.

“He’s a monster,” Cherie says repeatedly. And while that sentiment is accurate, it doesn’t register as intended until Ethan starts exhibiting superhuman strength and popping up from thin air. As his powers continue to show themselves, it feels like a child making up a game, only to constantly change to rules so they can win. The movie doesn’t complement this with any sort of momentum, though; it simply sends Cherie on a bunch of detours through one of the most deserted LAs ever put on film.

The problem here isn’t that the structure is shapeless. It’s that, for a movie about surviving the night, there’s absolutely no sense of time. Ethan tells Cherie that she only has to last until sunrise in order for him to leave her alone forever. Aside from the naïveté of her believing that, the movie doesn’t track how the time elapsed between scenes. Furthermore, the diversions that the script takes don’t feel freewheeling but forced instead, cementing themselves as plot contrivances for some sort of catharsis.

And yet such is too pandering to ever work. The movie shoves in some references to racial injustice, which, while valid, only appear at the last minute. There’s little intersectionality to the rest of the movie in terms of characterization or how men dismiss women’s claims. There’s also no legal precedent to the script, save for the one police officer featured in the entire movie who doesn’t believe Cherie’s accusations early on.

Truthfully, it makes for something quite regressive in its depiction of women. Its equation with menstruation and womanhood, the one-note writing, the limited intelligence—it makes an incoherent film that much dumber. It’s obvious that Feste had the best of intentions, but when a movie is so shoddily made that the ADR has a character speak a line while her mouth is still closed, it’s hard to ever get on board.